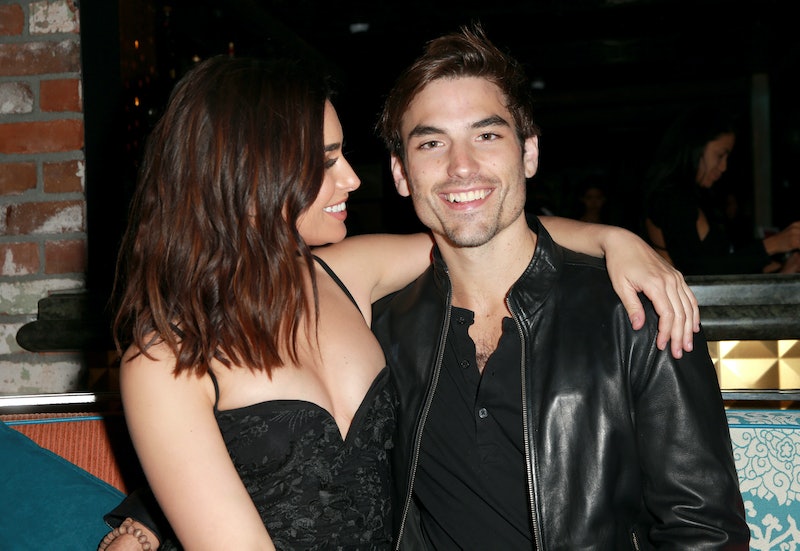 Bachelor Nation exploded into excitement this week with the announcement of a new couple, but the fandom isn't off the hook that easy. Their first interview as a couple revealed that Jared Haibon actually gave Ashley Iaconetti mixed signals that he was interested for the past three years. And while that drama may be behind them now, in this new light, the heat that the podcast host has taken over her investment in the Rhode Island native is distinctly unfair.

Over multiple seasons of Bachelor in Paradise, Ashley's relationship with Jared was portrayed as one-sided, with producers highlighting her mood swings, and fans all across social media commenting on what seemed to be a full-on obsession. But it's becoming clear now that this was far from accurate, and Jared gave his longtime friend plenty of reasons to believe he was interested. The couple sat down for a 44-minute episode of Ashley's show The Story of Us that will — or at least, should — make viewers see her in a much more sympathetic light.

"This story leads into why you saw me as crazy as I was on Bachelor in Paradise 3," Ashley told the camera midway through the episode. And Jared acknowledged she was correct, screwing up his face in discomfort and issuing a small, "Yeah." The timeline of Jared and Ashley's relationship that BIP viewers saw from the outside was one thing: Jared repeatedly telling his now-girlfriend they would never be together. He and the rest of the cast urged her to move on, and because she couldn't or wouldn't, Ashley came off as delusional — at least according to fans.

But behind-the-scenes, an entirely different story was being told. While Jared's on-screen message was consistent, his off-screen behavior was far from it. According to their video interview, the pair left BIP Season 2 in June 2015 with the goal of being just friends, even though they'd dated on the show.

Jared was behind that first breakup, but after seeing Ashley in the real world, he quickly changed his tune. He said he fell in love with her at a charity event in October 2015, and remembered thinking at the time, "I'm an idiot. This girl's so sexy and sweet, and we get along perfectly. What am I thinking right now?" And Ashley felt the change in their relationship as well.

When the 30-year-old recalled catching Jared staring at her at one point when she was dancing, he admitted, "I wanted you that night." "See?!" Ashley exploded at the camera, before revealing that she thought this was the beginning of something serious between them. "I thought, 'OK, I think I've done my job here,'" she admitted in retrospect.

But apparently, Jared hadn't done his — the job of figuring out what he wanted, that is. He was still one foot in, one foot out. He sent sappy texts, bought flowers, and invited Ashley to stay with him in Boston, where they "made out hard." For her part, Ashley shared in the video that she was interested and very flirtatious, although she quickly added, "but in a very friendly, not scary-aggressive way." And just the fact that she felt compelled to add that is proof of how unfairly she's been portrayed.

The relationship was two-sided; audiences were just only being shown one. Ashley was sure of her feelings, and Jared was outwardly indicating he was too, even though inwardly he was still waffling, terrified to risk ruining the friendship. As he said on TSOU, "Of course, there were more-than-friendship feelings for me, but I felt like if there was any doubt in my head, that’s so unfair for me to be halfway in."

In a lot of cases, someone being "halfway in" means being apathetic and uncommitted in your relationship. But it can also be used to describe someone who's hot and cold, and that seems more accurate here. Off-screen, sometimes Jared would act like a boyfriend, while on-screen, he'd act more like a friend, which Ashley said was incredibly confusing. "He would always extend his stays in LA," she explained during TSOU, "So don't think that I wasn't getting some sort of signal that he was into it." And Jared underscored the point later, when Ashley worried about how her early efforts might've come off, reassuring her, "You weren't being desperate at all. You were never being desperate."

But that's far from the bill of goods that Bachelor Nation was being sold. For as disorienting as Jared's back-and-forth was for Ashley, it might've been even more misleading for the audience, who was only shown moments when Jared was all the way out. During the couple's catastrophic second season together on BIP — the third season overall — the footage of Jared and the rest of the cast telling Ashley she was obsessing over nothing was relentless.

The editing was even cut so that the moment when Jared expressed his feelings to Caila Quinn — whom Ashley feuded with for his affections throughout the season — you can hear Ashley's sobs in the background.

All along the arc of their love story, Ashley bore the brunt of criticism from a fanbase that didn't see the whole picture. Throughout the entire video discussing their relationship, Jared cringed when presented with things he'd done to lead Ashley on. But all that guilt now can't change how she was portrayed at the time. He clearly feels silly for taking so long to figure out his feelings, but many fans will still need that same amount of time to reconfigure their thoughts on the pair.

Across social media, Bachelor Nation is just now getting some true context for Jared and Ashley's relationship, and a lot of the ideas about this couple have some real catching up to do. Words like "obsessed," "crazy," "manipulative," and "delusional" proliferate, as they have for years now, with some users laughing at Ashley's misfortune.

Still others went even further, crossing the line into accusing Ashley of being straight-up dangerous, as if she was some kind of stalker.

And even fans of the pairing have some very unkind, not to mention unfair things to say about the match.

At the end of the day, with all this new context, there are a lot of people out there who owe Ashley an apology for the way she's been portrayed in all this. And Jared and the BIP producers are probably among them. But somehow, in the face of all this bad publicity, she's managed to stay open and vulnerable, and in addition to apologizing, Jared should be thanking her for that impressive feat every day for the rest of his life.