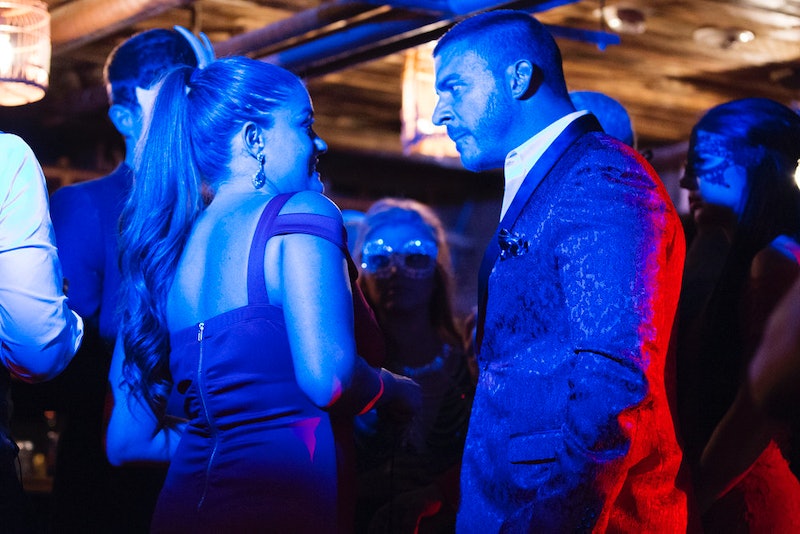 Spoilers for the April 9 episode. Being a reality television and being followed around by cameras must be stressful, but, of course, everyone’s personal limits are different. The pressure cooker that has been Season 6 of Vanderpump Rules is finally up to temperature, and Jax Taylor, OG SUR bartender and maker of many of his own messes, has had enough. Jax Taylor's angry outburst on Vanderpump Rules seemed in hindsight like it had been building for weeks. And no one — not his girlfriend, his boss, or his friends — knows quite what to do with him.

As previously alluded to, 99 percent of the drama that Jax takes offense to are events of his own doing. In the beginning of Season 6, Jax admitted to cheating on Brittany, his girlfriend, with a friend, Faith, from SUR. Brittany, bless her Kentucky heart, took him back, but from what fans have seen this season, Jax doesn’t understand why everyone is still angry with him. I’m not a relationship expert, but I'm guessing that everyone in the Vanderpump Rules cast is angry with Jax because he has a history of cheating and lying and not really making up for it. Saying "sorry" loses its meaning when you have to say it so often. It also loses its meaning when you don’t mean it, or when you do that thing you say you were sorry for again. Oh, or when you deflect to everyone else around you.

Digressions aside, in the April 9 episode of Vanderpump Rules, Jax exploded into a very strange rage. He wanted to know if Adam, the new bartender, had eyes on his girl. Adam was all, “Uh, no, I know you’re together and Scheana was trying to egg me on to do it." And suddenly, you could see the flames ignite in Jax’s eyes, falling into place like a jackpot on a slot machine. Scheana was texting Adam while Adam was hanging out with Jax, trying to get Adam to creep on Jax’s girlfriend. This is because Scheana was mad that Jax had a conversation with Rob, Scheana’s boyfriend, in which Rob told Jax that he wasn’t in love with Scheana. This Scheana thing may be the only time he wasn’t trying to stir the pot — Jax and Rob and the other guys were all just having a conversation. The tape confirms this. Why do reality stars always deny the tape? (See also: Kristen and James.)

In any case, Jax decided to confront… everyone at SUR. Instead of brushing off weird rumors and going on to live his life, Jax decided to blow it all up. He was cursing at James, at Lala, at Adam, at Tom Sandoval, all in the earshot of Lisa and Ken, who had walked in just in time to see this mess. But this was the part that made it seem that Jax’s fit was him having a true angry meltdown and not just a made-for-television moment — Jax kept telling Lisa, over and over, that no one was listening to his story, and that she shouldn’t be mad at him because he didn’t say hello quickly enough while he was cursing everyone out. It was a real moment, and it ended with Lisa telling Jax to get the hell out of the restaurant, and with Jax walking down the street, punching a pay telephone along the way.

How will Jax keep his job after this? Actually, it seems implausible that Lisa or the show would let that man go, considering how his actions drive the plot. With his reiki and his therapy, Jax is trying to better himself, but from what fans have seen of this reiki on the show, it just causes Jax to blame outside forces for his problems. While Kelsey, Jax’s reiki teacher, tells Jax that the best he can do is change the way he reacts to obstacles, what happens if Jax is his own biggest roadblock? Spreading rumors, cheating, and screaming at your place of business may make good television, but for Jax — who's enough of an adult to know better — it’s not a sustainable lifestyle.

More like this
This 'Emily In Paris' X 'The Hills' Crossover Is Très Chic
By Marenah Dobin
'Bachelor' Star Cassie Randolph’s Sister Is In The 'Yellowstone' Spinoff '1923'
By Grace Wehniainen
Hannah Ann Got Engaged 3 Years After 'The Bachelor' & The Proposal Was Dreamy
By Grace Wehniainen
We Finally Have Some Answers To How Heather Gay Got A Black Eye On 'RHOSLC'
By Samantha Rollins
Get Even More From Bustle — Sign Up For The Newsletter
From hair trends to relationship advice, our daily newsletter has everything you need to sound like a person who’s on TikTok, even if you aren’t.