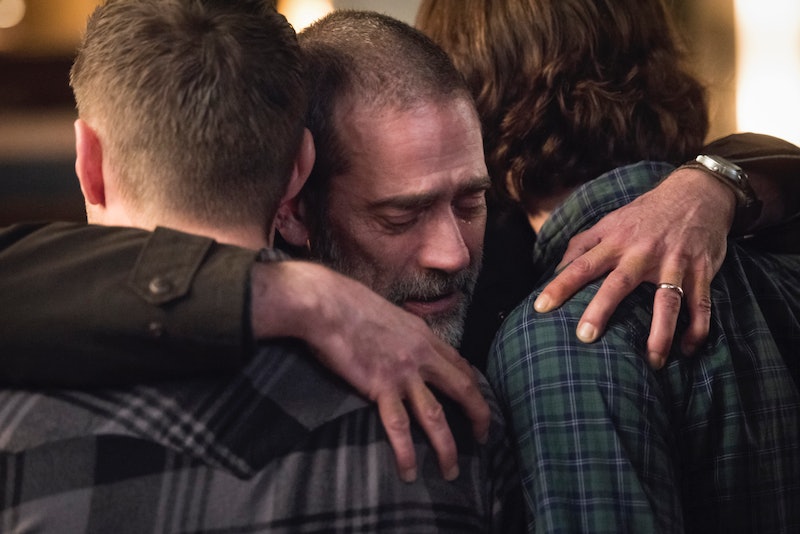 Ahead of the final season premiere, Jeffrey Dean Morgan and his Supernatural sons got matching tattoos as a permanent representation of how the show has bonded them. On Thursday, Oct. 10, Morgan shared a collage on Instagram featuring him, Jensen Ackles, and Jared Padalecki receiving their new ink from New York tattoo artist Mike Lucena. The post doesn't reveal what their matching tattoos look like, but per Morgan's caption, the idea was to have a tangible way to show how connected the trio is.

The 15th and final season of Supernatural begins tonight on The CW, and the cast, past and present, have been sharing how emotional it is for them to say goodbye to the series. Morgan played John Winchester, Dean and Sam's father, in the first two seasons of the show. He went on to land the role of Negan on The Walking Dead, but he has remained close to his Supernatural family. He even made a guest appearance in the 300th episode in Season 14.

Even though he hasn't been a regular on the show for as long as Ackles and Padalecki, Morgan has shared via interviews and social media how his friendships with his TV sons have endured. Recently, he and his partner of 10 years, Hilarie Burton, were married in a private ceremony that was officiated by Ackles and Morgan's The Walking Dead co-star Norman Reedus. The caption on his post referenced the wedding, and noted that he and Burton aren't the only ones joined for life. His caption reads in part, "@jaredpadalecki @jensenackles and myself will forever have a bond that is both special, and permanent."

It was fitting that Ackles was the ceremony's co-officiant since he's responsible for Burton and Morgan meeting. During a 2015 interview with The Huffington Post, the TWD actor said, "Jensen Ackles introduced me to my significant other on a blind date." He and Burton have since gone on to have two children together: Augustus, 9, and daughter George, 1.

Given Morgan's closeness to his Supernatural co-stars, a return as John was inevitable — even though the Winchester patriarch died in Season 2. In January, the actor spoke to Entertainment Weekly before the 300th episode aired, and said that he would like to see John return for a longer arc before the series signs off for good. "My dream would be to come back and do something in the last year, the last episode, the last couple episodes, whatever, and do a proper little arc," he told the publication.

Since Season 14 ended with an all-out apocalypse waging and the gates of Hell thrown open, anything is possible. A return for Morgan in the final season hasn't been confirmed, but his latest Instagram post reiterates that the Supernatural cast is a family. And his Supernatural co-stars previous comments back that assertion up. Per TV Insider, at the show's 2019 Comic-Con panel, Padalecki said, "For me, the legacy is going to be — [Jensen] and I talked about this last night — I feel like I’m really lucky that my friendships won’t go away."

The final season of Supernatural begins Thursday, Oct. 10 on The CW.

More like this
9 Celebrity Couples With Matching Tattoos
By Jordan Murray
Why Sadie Sink Is Hopeful Max Will Return In Stranger Things Season 5
By Brad Witter
What Working At Marvel Is Really Like, According To A 'Ms. Marvel' Co-Creator
By Gretchen Smail
'Friends' Creator Marta Kauffman Opened Up About Misgendering A Guest Character
By Grace Wehniainen
Get Even More From Bustle — Sign Up For The Newsletter