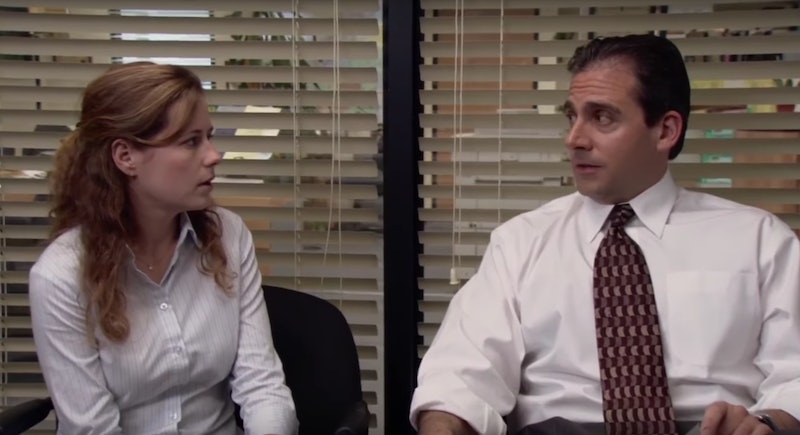 Well, this is about as cute as a teapot stuffed with hot sauce (not ketchup!) packets, a yearbook photo, a cassette, a Boggle timer, and a love letter. In honor of Throwback Thursday, Jenna Fischer shared a Polaroid taken during The Office’s first table read. And yes, when you see it, nostalgia (AKA the weakness that's second only to the neck) will wash over you.

In the photo, Roy (David Denman), Ryan (B.J. Novak), Jim (John Krasinski), Pam (Fischer), Dwight (Rainn Wilson), Michael Scott (Steve Carell), and Phyllis (Phyllis Smith) pose for the camera while standing next to a table covered in, presumably, their very first The Office scripts. And we presume this because at the bottom of the instant photo’s border, someone wrote, “THE OFFICE — DAY ONE TABLE READ.”

A little less than 15 years ago, the cast of The Office got together for the first time to read their first script for what would become one of the greatest comedy series to ever grace the small screen. And some members of the series’ iconic ensemble took a picture together on that day. Needless to say, the moment captured on this Polaroid photo is a historic moment.

So uh, get ready to declare nostalgia-cy. And no, you won't say it. You will declare it.

The first episode of The Office, which is essentially a word-for-word remake of the first episode of the British Office, premiered on NBC on March 24, 2005. In the series premiere, a documentary crew introduces us to the folks who work at the Scranton, Pennylvania, branch of the Dunder Mifflin Paper Company. And in that first episode, we learned quite a bit about the Scranton team. We heard about Angela’s cat’s party. We saw Jim put office supplies in Jell-O. We met Jan and listened in on a phone call with Todd Packer. We watched Michael accuse Pam of stealing Post-It notes, tell her she was fired, and then let her know he was kidding after she began crying. And we watched Michael call everyone into the conference room and lead a staff meeting. The first of many, many staff meetings.

And we had only just begun. As Brian Baumgartner, aka Kevin, told USA Today back when the series ended in 2013, "We did six episodes the first season, and then we came back and ... shot six (more) before it aired on that second year. We were going on a hiatus, but we didn't know if we'd ever be back. And Steve goes, 'We got to do 12. We did something we were proud of.'"

Oh, did it ever come back. After Season 1, NBC picked it up for another six-episode season. That six-episode season eventually became a 22-episode season. And the show was only getting warmed up. The U.S. version of The Office ran for nine seasons, racked up multiple Emmys, nabbed two Screen Actors Guild Awards, won a Golden Globe, and was awarded a Peabody.

But long before the trophies and the rewatches and the legacy, the U.S. version of The Office was getting together for the show's very first table read.