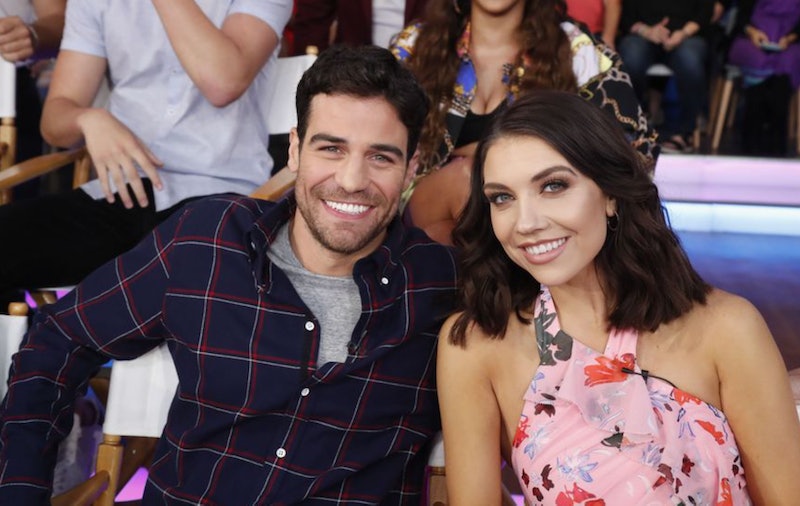 On Monday, People shared a video of Jenna screaming as Grocery Store Joe walks through the dance studio doors, and duh, it's great. She cannot believe she, a fan of The Bachelor franchise, has been partnered with the breakout star of The Bachelorette Season 14. And duh, she is thrilled. Grocery Store Joe suggests she put a pin in her excitement, adding, “I don’t know how to dance.”

Jenna doesn’t seem fazed by his lack of dance training. Rather, she’s worried her totally understandable reaction to the situation was too much. (It was not too much.) In a talking head, the dance pro says, “I’m so embarrassed because I just fan-girled so hard, and he doesn’t even know who I am.”

The guy who stole America's heart after a short but sweet appearance on Becca Kufrin’s season of The Bachelorette is an expert when it comes to picking out produce, but as far as picking up choreography goes? That is a different story. As he explained to Us Weekly at the Bachelor in Paradise Season 5 finale taping,

Lucky for Grocery Store Joe, reigning DWTS champion and So You Think You Can Dance all-star Jenna Johnson will take him under her wing. As out of his element as he may be, it sounds like Grocery Store Joe is going for the Golden Delicious apple, er, the gold.

Whether or not they win, hey, at least they're having a good time. The day after Bachelor Nation learned Grocery Store Joe joined DWTS, he explained to Us Weekly,

“We’re having a lot of fun. We’re having fun with and I just gotta, you know, do my best.”

And his dance partner sure seems impressed by the progress he’s made so far. As Jenna expressed to People earlier this month,

“He’s never danced before, but he’s getting better and better everyday. I’m super proud and I can’t wait to show everyone what we’ve been working on!”

And Bachelor Nation can't wait to see Grocery Store Joe hit the dance flo— wait. In another DWTS video, Grocery Store Joe revealed that he does not own a grocery store anymore. So… do we call him Joe the Former Grocer now? Aspiring Ballroom King Joe? Joe No Grosh?

Oh, what do you know? Joe's already got this covered. In the latest behind-the-scenes DWTS video, the Bachelorette alum offers up a suggestion: Dancing Joe. Well, there it is. Out with the Grocery Store Joe, in with the Dancing Joe.

More like this
Bachelorette Gabby Kissed Her New Fiancé On 'Dancing With The Stars'
By Jake Viswanath
Teresa Giudice Flipped A Table — Again —  On The 'DWTS' Season 31 Premiere
By Jake Viswanath
Here’s What Went Down Between Romeo, Jill, & Kira Before 'Bachelor In Paradise'
By Grace Wehniainen
Why Did Lace's Fake Her Birthday On 'Bachelor In Paradise'?
By Kadin Burnett
Get Even More From Bustle — Sign Up For The Newsletter