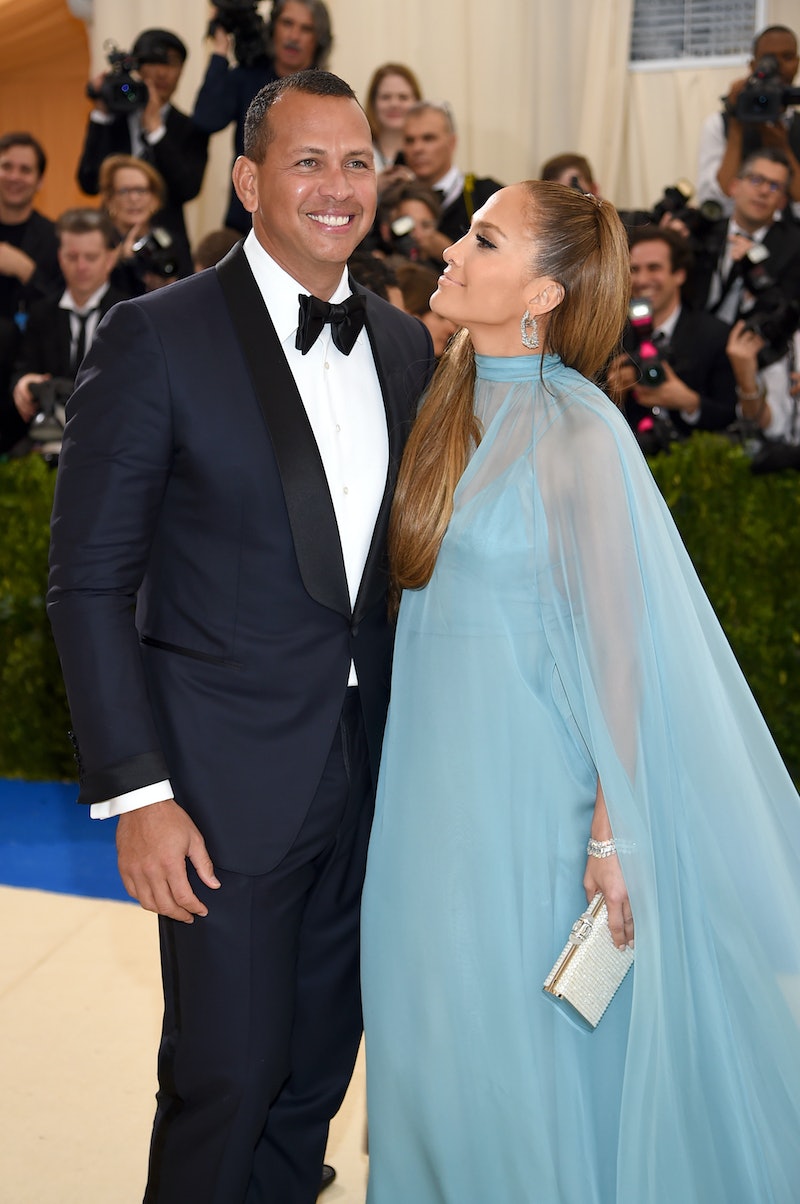 J. Lo and A-Rod were destined for one another. Believe it or not, but Jennifer Lopez and Alex Rodriguez had an electric connection all the way back in 2005. That's right, there was a "weird electricity" felt between the two when they first met 14 years ago — and in the presence of Marc Anthony, Lopez's ex-husband.

For Sports Illustrated's "Where Are They Now?" issue, the engaged couple opened up about establishing a bond many years ago that eventually led to them falling in love and creating a life together with their children from previous relationships. While chatting with the magazine, the "Limitless" singer discussed meeting Rodriguez at Shea Stadium in New York City.

During their initial interaction, not only was Anthony in attendance, but Lopez revealed she felt a quick spark when shaking the former New York Yankee player's hand. At the time, Rodriguez was married to Cynthia Scurtis. The Second Act star told the magazine,

"We shook hands, and it was this weird electricity for, like, three seconds. Three to five seconds of looking at somebody right in their eyes, and getting stuck."

In March 2017, E! News shared a photo of the two shaking hands from that particular moment in 2005, which you definitely need to check out. Clearly, the electricity wasn't enough for either of them to do anything about right then and there. They were also obviously both in committed relationships.

That said, it sure seems like they were totally meant to be. Like Lopez, Rodriguez previously commented years ago on how attracted he was to the multifaceted talent. In a 1998 interview when A-Rod was only 23 (shared by the MBL Network on Instagram on June 4), the former professional athlete was asked by a reporter, "What would a dream date with Alex Rodriguez be?" He immediately responded, "Jennifer Lopez. Hopefully you could find me a date with her."

The MLB Network captioned their video, "@arod always knew." That's for sure. Rodriguez also shared the throwback clip on his Instagram and wrote next to it, "I just had a feeling." Lopez commented on his post, "OMG... i love this too much."

Talk about fate. One might even say their "weird electricity" was established before the two even met. Whatever the case, here they are now engaged and planning a wedding. Based on the way the two continue to gush about each other, it's evident there's still electricity between Lopez and Rodriguez. Like he wrote on Instagram for their two-year anniversary,

"Macha 13, I can’t believe it’s been two years. Only 730 days, which have flown by, but it feels like we have been together forever. We are meant to be, and how much you mean to me cannot be put into words."

After all these years of spark-filled interactions and dreams of dating J. Lo, the two found their way to one another. Not only do they have a solid relationship, but their chemistry is undeniable. If anything, Lopez and Rodriguez's romance just goes to show you that time is a funny thing and someone you met years ago may end up being your one true love.