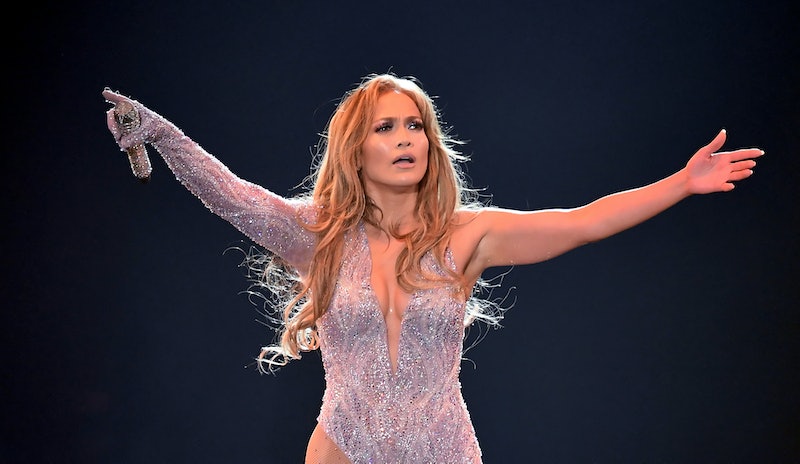 Long before she was known as Jenny from the Block, she first rose to fame by playing a Tejano music icon — and now, as a superstar herself, J. Lo is still celebrating the life and career of Selena. During her concerts in Texas over the past few days, Jennifer Lopez covered the 1994 Selena song "Si Una Vez" as a tribute to the late legend.

Lopez's North American It's My Party tour — which kicked off in early June in Los Angeles and will continue around the country until August, to celebrate the singer's 50th birthday — included four stops in Texas, the home state of Selena Quintanilla-Pérez. And as Lopez herself said on Instagram, "When in Texas, [you] got to do it like Selena." There was no more appropriate way for her to celebrate her time in Texas than with a tribute to the late queen of Tejano music.

According to O Magazine, the singer kicked off her Texas run on June 22 with a show in San Antonio, where she told the crowd that "I have a lot of good memories here in Texas." After the audience called out "Selena!" Lopez asked, "Y'all want to do a little Selena?" before introducing "Si Una Vez" as her favorite of Selena's songs. Then, on Tuesday, June 25, after performing in Houston, Lopez shared a clip of herself singing "Si Una Vez" at one of her Texas concerts on Instagram, along with a message thanking her Texan fans for their support. "Thank you so much Texas!!" she wrote. "What a run!!!"

Selena was clearly on Lopez's mind during her entire time in Texas, as she tweeted on June 21, before her San Antonio concert that "whenever I get to Texas I remember the beautiful time I spent here doing the movie Selena!!" along with the hashtags "#selenaforever #selenaappreciationpost#channelingmyinnerselena" and "#Iloveyouselena."

In 1997, just two years after Selena was tragically murdered at the age of 23, Lopez landed her first leading film role playing the legendary singer in the biopic Selena. In addition to helping to keep her memory alive all these years later, Lopez has often spoken about the ways that making that movie and playing Selena continues to influence her career to this day. "She taught me so much on how to navigate this business, because I played it in the movie," Lopez said in an interview on Apple Music's Beats 1 show in April, according to E! News.

Describing the role as a "beautiful blessing for my life," Lopez added, "It was a beautiful time in my life and it taught me so much about life." Reflecting on the prospect of taking on such an important role so early in her career, Lopez explained, "I was young, I was 26 when I played Selena. I didn't realize, at the time, the responsibility that I had, all I wanted to do was do her memory and that moment justice."

In addition to her Selena tributes, Lopez's It's My Party tour has been filled with memorable moments thus far; most notably, the singer and World of Dance star invited her 11-year-old daughter Emme onstage with her during the opening night concert in Inglewood, California. Wearing a cropped red hoodie and a version of Lopez's tulle ballgown, Emme sang "Limitless" with her mother in an emotional moment that Lopez chronicled on her Instagram page. "I can't take it!" Lopez wrote alongside a video of their duet, along with the hashtag "#ProudMama." In another Instagram post, Lopez gushed that the tour was bringing her "so many gifts," and that "this is one of my favorites.... sharing the stage and singing with my lil coconut...my heart is full...she is #limitless."

"When I was little, I used to be really shy singing in front of people, but not anymore," Emme confessed in a YouTube video that Lopez posted shortly after the concert, giving fans a behind-the-scenes look at the tour from her daughter's perspective. "I've done this before ... but not like this." Based on the overwhelming reaction to her arena debut, something tells us that performing in front of thousands of screaming fans will become something Emme gets used to very soon. And maybe next time they can put a new spin on a Selena classic together.