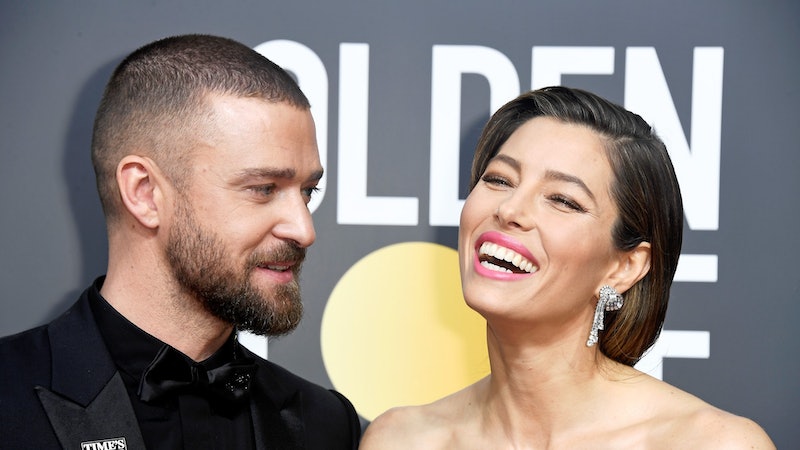 If *NSYNC ever needs someone to fill in for Justin Timberlake on a potential reunion tour, they don't have to look very far to find the perfect candidate. At the Casamigos Halloween party on Friday, Oct. 25, Jessica Biel dressed as *NSYNC-era Justin Timberlake. The Limetown actor was joined by four friends at the party, where they all posed as the iconic boy band, and according to People, the group spent most of the night on the dance floor.

In order to channel her husband's classic boy band style, Biel wore a shiny, turquoise jumpsuit — similar to the one that Timberlake wore to the 1999 American Music Awards — along with tiny, blue sunglasses and a curly blonde wig to emulate Timberlake's most famous hairstyle. While the musician himself didn't wear an old-school *NSYNC outfit for the party, he did pay homage to the music theme by dressing as a human-sized microphone and posing alongside his wife.

Biel's choice to recreate this particular look from Timberlake's past is especially fitting because it was one of the outfits that inspired Timberlake to apologize for *NSYNC's '90s fashion. During a February 2017 interview with The Hollywood Reporter, the "Man of the Woods" singer reflected on the band's poor sartorial choices, saying, "I want to take this opportunity to apologize [for the coordinated outfits]."

He continued, "Anytime you can do dancing from the '90s, [that's] wonderful, but there was a lot of questionable attire. And, I think [*NSYNC] may have been responsible for, like, 90 percent of it in that decade. So, sorry."

Biel's Timberlake-themed costume comes just a few days after the actor revealed during an appearance on The Tonight Show Starring Jimmy Fallon that she has never actually listened to any of *NSYNC's music. "I only know three words, 'Bye, bye, bye.' Which I guess is just one word three times," Biel confessed to host Jimmy Fallon, before revealing that during a recent game of Truth or Dare, she needed her husband to help her sing one of the band's songs after she was dared to belt out an *NSYNC classic. "Justin coached me through the chorus, the verse, I was looking at the words, it was humiliating!"

While chatting with Fallon on the Oct. 22 episode, Biel also admitted that she never listened to *NSYNC at the height of their fame in the late 1990s and early 2000s, which explains her lack of lyrical knowledge. "I lived under a rock, I wasn't into pop culture music," Biel said, explaining that she only listened to musical theater like Rent and Motown music when she was a teenager.

Fallon then surprised Biel with an interview from 1999, where the then-17-year old shaded her future husband's boy band. "To be honest, I don't really listen [to them]," Biel said at the time. "I mean, I know of them, of course. And I've heard of them, and I've heard the music. But I don't think I own any of their CDs. I'm not a huge fan, but, cool, I guess."

Biel may not have been an *NSYNC fan in their heyday, but she's clearly making up for it now with her Timberlake-inspired Halloween look. And if she needs a costume for next year, there are plenty more iconic and cringe-worthy outfits that Timberlake and his bandmates wore over the years to take inspiration from.

More like this
Britney Spears Shares & Deletes Photos Of Justin Timberlake From 22 Years Ago
By Jake Viswanath
The Jonas Brothers' New Album Has A Very Meta Name
By Alyssa Lapid
Cruz Beckham Teased New Music With An Adorable Nod To Mom Victoria Beckham
By Stephanie Topacio Long
The Spice Girls Are Set To Reunite At King Charles III’s Coronation
By Sam Ramsden
Get Even More From Bustle — Sign Up For The Newsletter
From hair trends to relationship advice, our daily newsletter has everything you need to sound like a person who’s on TikTok, even if you aren’t.