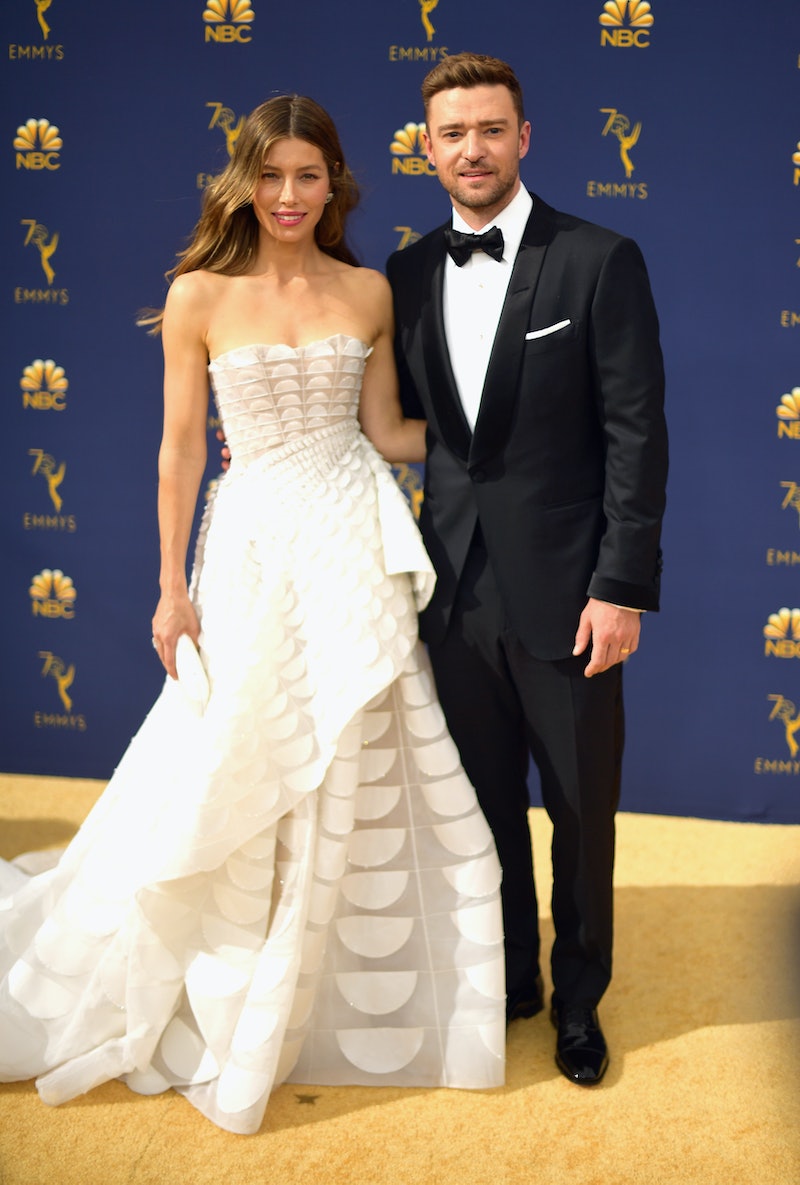 Justin Timberlake celebrated his birthday on Thursday, Jan. 31, and Jessica Biel had the sweetest message to mark the occasion. Biel's birthday post for Timberlake captures how much their relationship has grown in the years they've been together.

The picture Biel shared looks like it was taken at least a few years ago. And based on the actor's caption, she's not exactly thrilled with what she's wearing in the vintage picture, either. She wrote on Instagram,

"Since the days of embarrassing pink ruffled bikinis and underwater photo shoots, you have been infusing my life with so much joy and laughter that I blame YOU for my smile lines. But I wouldn’t trade them for the world."

She went on to wish her husband a happy birthday, calling herself the "luckiest human around" to get to spend each day with him:

"I wear them with pride knowing that I am the luckiest human around to have the honor of hearing your jokes, your words, your voice, every day of my life. Happy birthday to the man of my blue ocean dreams. I love you."

The photo choice shows how much Biel cares about Timberlake. Because even though she apparently doesn't love the photo, they can still laugh about it together.

Based on their relationship history, the two of them have plenty to smile about. Biel and Timberlake have been together since 2007, after meeting for the first time at the Golden Globes. They got engaged in 2011, and their wedding was in 2012. And in 2015, their son Silas was born. They've been through a ton in their relationship, which spans more than a decade. And their love has stood the test of time (even if Biel might not say the same about the swimsuit in the picture she posted).

As far as how the couple celebrated the 10-time Grammy winner's birthday, it looks like the festivities were pretty low-key. Timberlake shared a series of photos titled "last night," and one of them features him blowing out the candles on a gold cake.

Trevor Noah, John Krasinski, Emily Blunt, and Anthony Mackie are in the photos, too, so it was a star-studded, if small, affair. Page Six reports that Blunt and Krasinski, along with Noah and Questlove, were in the VIP section at Timberlake's Madison Square Garden concert on Thursday. Apparently, the whole crowd of concertgoers sang "Happy Birthday" at one point during the show, too.

And for an extra birthday surprise, it looks like Mase performed an impromptu rap set for Timberlake backstage, too. Mase is tagged in one of Timberlake's photos, and Questlove also shared some videos of the rapper at Thursday's even on his own Instagram Story.

Biel's photo and caption for her husband's birthday show that she and Timberlake are still having plenty of fun together after all these years. Whether they're glammed up on the red carpet or just hanging out at home, it looks like the two of them always keep each other smiling.