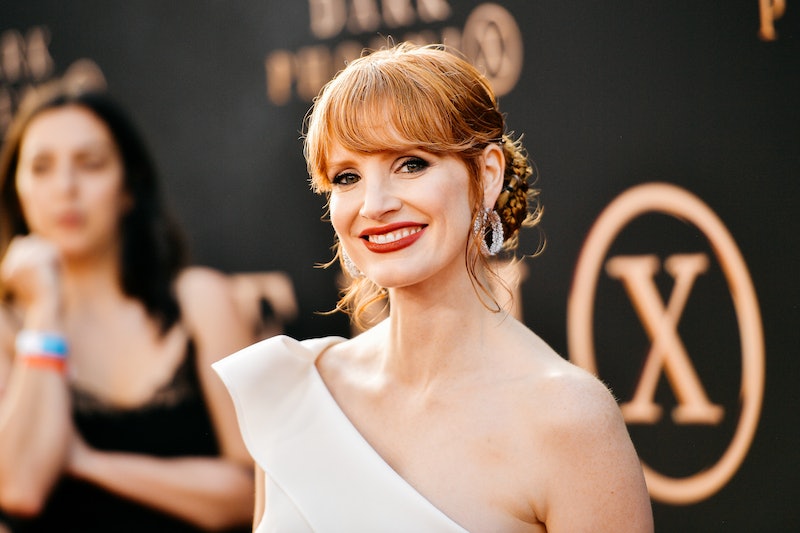 Praise the gods of cinema, because principal photography for Jessica Chastain's spy thriller 355 has begun. And that means we are that much closer to seeing Chastain, Lupita Nyong'o, Penélope Cruz, Diane Kruger, and Fan Bingbing play a quintet of spies who have to join forces to save the world in a movie that sincerely sounds too perfect to be real, but guess what? It is real. On Monday, July 8, Chastain let her Instagram and Twitter followers know that they have begun filming. She also generously shared a behind-the-scenes sneak peek, and yes, the behind-the-scenes peek rules.

At the top of the video, Chastain gives a brief summary of how this dream of a movie came to be. “When Simon [Kinberg] and I were making X-Men, I had this idea of doing a female ensemble action film,” she begins. “So I called all the actresses. And we are the studio. Everyone owns the film. And now we’re making it.” Wow, it's just that simple (when you're an A-list actor)!

The script, which is based on Chastain's idea, was penned by playwright and screenwriter Theresa Rebeck. Dark Phoenix writer and director Simon Kinberg is at the helm, and Sebastian Stan and Édgar Ramírez are also part of the ensemble.

The project was officially unveiled at Cannes in 2018, where it was scooped up for a couple of bucks. (And by “a couple of bucks” I mean “millions of dollars.”) A few days before the festival began, Deadline revealed that this unveiling was going to happen, rightfully anticipating that it would be a big deal.

In a statement provided to Deadline, Chastain said,

“I had so much fun working on The Help that I always wanted to do another female ensemble film. I love the Bourne movies, the Mission: Impossible films, and wondered why, except for Charlie’s Angels, there hadn’t been a true female ensemble action-thriller spy film. That got my wheels going, along with the idea of casting actresses from all over the world to truly make it an international project. I realized the incredible creative freedom we would have with that. I brought the idea to Simon, told him about the actresses I was thinking of, and he was so sweet. He said, ‘I want to do it with you.’”

Chastain also told Deadline that the name of the movie pays homage to a historical figure. She said, “We have a consultant in our film that has a lot of knowledge in espionage. This title came from one of the conversations I had with him. Agent 355 was the code name of a female spy during the American Revolution. She was one of the very first spies for the United States, and her identity is still unknown. For a lot of women who work in the CIA and other organizations like that, Code 355 is a universal slang term for female spy. It’s the invisible woman who was never named.”

Man, I am so ready to let this movie step on my neck and dump a bucket of popcorn over my head.