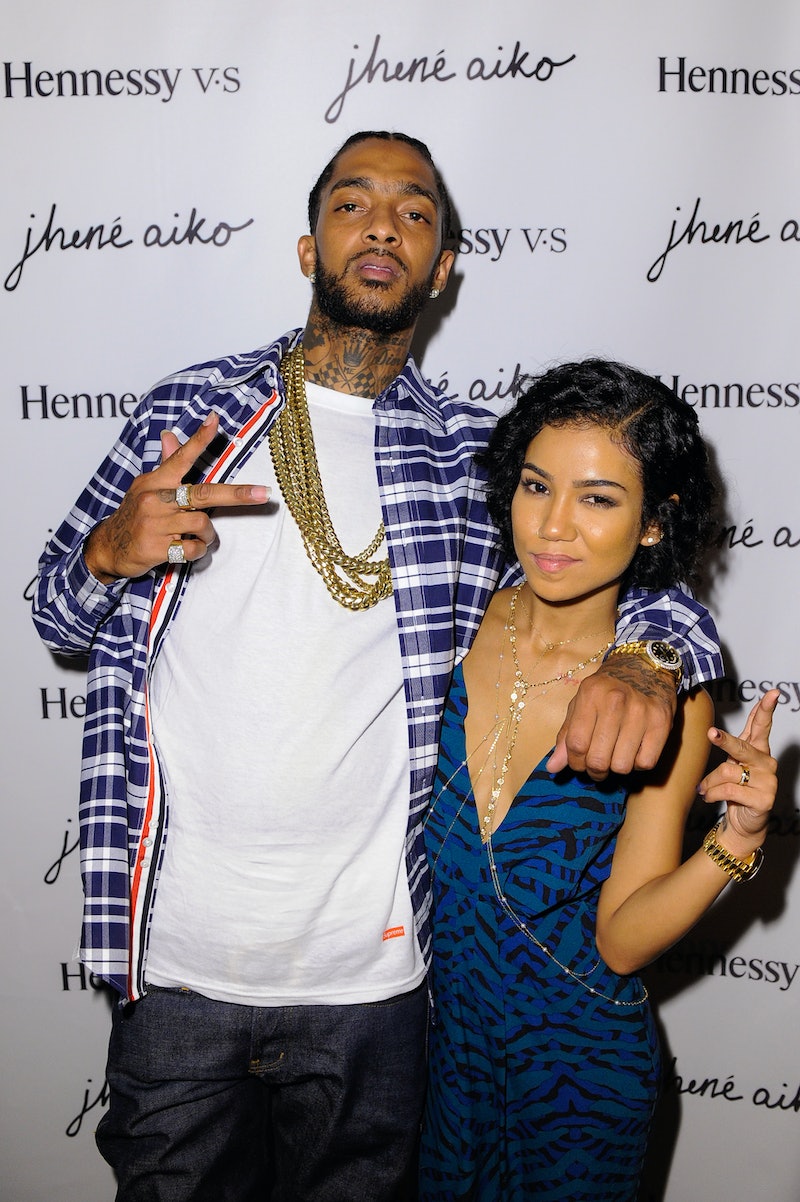 It seems that the music world instantly changed due to the tragic loss of Nipsey Hussle on March 31. And as people remain shocked over the massive loss of one of the hip-hop community's most-beloved assets and the tributes continue to pour in, singer Jhené Aiko will honor Nipsey Hussle by postponing the release of her new music.

Aiko, who was close friends with Nipsey, announced the pushback in response to an Instagram fan's comment about her next release. In a screenshot, which was captured by The Shade Room, Aiko shared,

"Out of respect for Nipsey, I will be postponing the release of the new music I planned on releasing this month... until I feel the time is right. I want to take this time to remember and reflect on the life of the legendary Nipsey Hussle. Thank you for understanding. Love live NH"

Out of respect for the beloved entertainer and community activist, the entire hip-hop world has, for the most part, taken an unofficial hiatus from releasing new music. Vulture reported that Tidal exec Elliott Wilson urged members of the hip-hop community to observe a week of no "hip-hop releases." On April 2, Uproxx additionally noted that Tidal updated its "New Albums" page to contain Hussle’s discography.

In additional to Aiko, Revolt revealed that artists such as YG, ScHoolboy Q, Machine Gun Kelly, Kash Doll, and Alchemist have also delayed the release of their music out of respect for Hussle.

Prior to her April 8 revelation, Aiko paid tribute to her friend and fellow L.A. native Hussle several times on social media. In one Instagram post, the 31-year-old singer shared a snapshot of herself and Hussle, along with a touching caption that showed just how close the two were before his passing. It read,

"you so inspired me, motivated me ... you made me so proud to be from the same city. i am honored to have known you and so thankful that you always showed me love and support. people always thought u were one of my brothers and in a way, you are. my heart is so heavy. we really lost a gem. L.A is weeping. it'll never be the same. my prayers and deepest condolences go out to your wife, your children, your family, your friends and fans. we will never forget you. we will never let you or the things you taught be forgotten. you are a LEGEND!!! the chillest, the realest... rest peacefully Nipsey"

Hussle and his longtime girlfriend actor Lauren London both notably appeared in the "Slauson Hills Edition" of Aiko's "Never Call Me" music video, which was released in March of last year.

As reported by the Los Angeles Times, Hussle, born Ermias Asghedom, was shot multiple times at 3:20 p.m. on March 31 outside of his The Marathon Clothing Store in Los Angeles. He was pronounced dead at the hospital; two other people were injured in the shooting. Police arrested Hussle's suspected murderer, Eric Holder, on April 2. According to a release from the Los Angeles County's District Attorney's Office (via an April 4 report from People) Holder was charged with one count of murder, two counts of attempted murder, and one count of possession of a firearm by a felon. Entertainment Tonight reported that Holder pled not guilty during his arraignment last week.

A memorial service in Hussle's honor is being held at The Staples Center in Los Angeles on Thursday, April 11. ET reported that tickets for "Nipsey Hussle's Celebration of Life" ran out in less than 20 minutes.

While the hip-hop and urban music world's collective moment of silence may seem like a small sacrifice, their statement and unified decision to honor one of hip-hop's most beloved members helps to shed further light on just how large of an impact Nipsey Hussle had on the entire world.

And as family, friends, fans, and even those who may have never heard of him before, continue to grieve the tragedy of Hussle's death, Jhené Aiko and others are helping to keep both his memory and all of the good that he stood for alive and well. #TheMarathonContinues

More like this
You Might Want To Rewatch 'Elvis' For This Britney Spears Easter Egg
By Grace Wehniainen
Sadie Sink Would Escape Vecna From 'Stranger Things' With This Taylor Swift Song
By Grace Wehniainen
What Is Ariana Grande's Net Worth? When It Comes To Money, She Has No “Problem”
By Hugh McIntyre
Lily Allen Was “Quite Emosh” After Performing Sober At Glastonbury Festival
By Stephanie Topacio Long
Get Even More From Bustle — Sign Up For The Newsletter