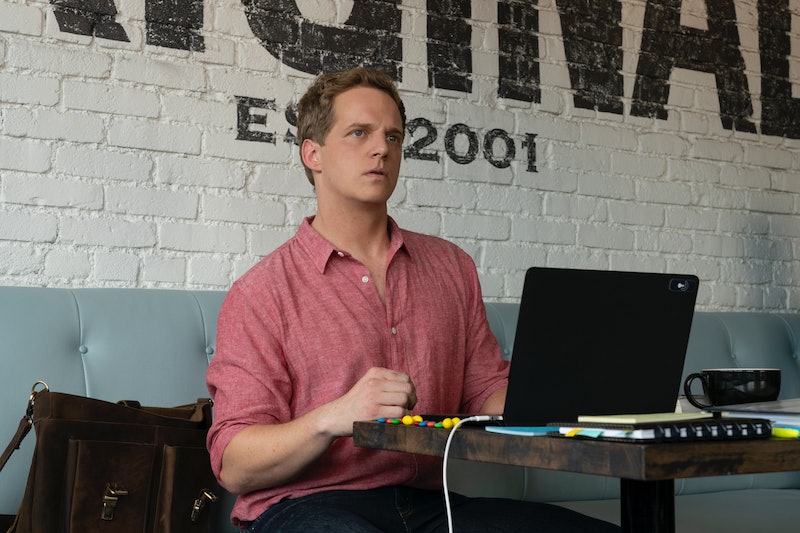 You're The Worst is basically a series-long thought experiment for whether or not four initially terrible people can grow to become better versions of themselves. Throughout the show's five seasons, they've, at times, surprised us, but more often than not they end up taking one step forward, five steps back. Such is the case when Jimmy cheats on Gretchen in You're The Worst's Feb. 6 episode.

So far this season, Jimmy has taking significant strides toward growth. He sold a screenplay, used the resulting money responsibly to pay off his mortgage, and set an official wedding date with Gretchen. But while at times it's seemed like Jimmy is truly ready for the next stage of life, "A Very Good Boy" shows he'll need to more actively fight his worst instincts to be a good partner to Gretchen.

By now, Jimmy has conquered most of his toxic impulses, but his desperate need to be seen as superior and impressive to others flares up when Gretchen accuses him of being "a very good boy" in the Feb. 6 episode. Soon, Jimmy starts trying to do "bad boy" things such as asserting dominance in his relationship with Gretchen, stealing strangers' laptops, and at one point almost pushing a mildly annoying man into traffic. While Jimmy seems to equate the act of committing a murder with being a tough and cool dude, he eventually has a post-mosh pit epiphany that the baddest boy of all is the boy that doesn't need to prove that he is bad. His epiphany comes a few seconds too late, however, as he discovers that while he was monologuing about his new appreciation for trying to be a good person, he was also receiving oral sex from his and Gretchen's florist.

As we saw in the third episode of Season 5, "The One Thing We Don't Talk About," Gretchen and Jimmy's engagement hasn't stopped Gretchen from drunkenly making out with strangers, but Jimmy's transgression kicks things up a few notches. Jimmy receiving oral sex from someone that he and Gretchen are employing to help with their wedding means that the three of them will be forced to interact whenever the topic of flowers arise — if there are even flowers to still be discussed.

The lingering question at the end of the episode is whether or not Jimmy will tell Gretchen about this transgression, or if he'll attempt to sweep it under the run. The two have never had much of a traditional relationship, but surely, even they have lines that can't be crossed. Then again, they've forgiven each other for worse things. Cheating on Gretchen is hardly the most horrible Jimmy has done to her — ghosting her immediately after proposing to her still takes the cake — but can a relationship built on a foundation of mutual and continued pain and betrayal really work? Jimmy and Gretchen may love each other, and they may, even in a messed up way, work together, but perhaps the lesson they still need to learn is that that's not always enough.

At the same time, You're The Worst's fifth and final season has been steadily building to a satisfying yet realistic end. Lindsay and Edgar have both found personally fulfilling jobs, even if they have work left to do on themselves, and Jimmy and Gretchen had seemingly found a way to be with each other in a mature way that didn't sacrifice who they are as a couple. That Jimmy could destroy that in a single, fleeting moment could undo everything the show has been working toward. It certainly wouldn't be the first time, but with the series finale fast approaching, Jimmy may have wasted his last chance.