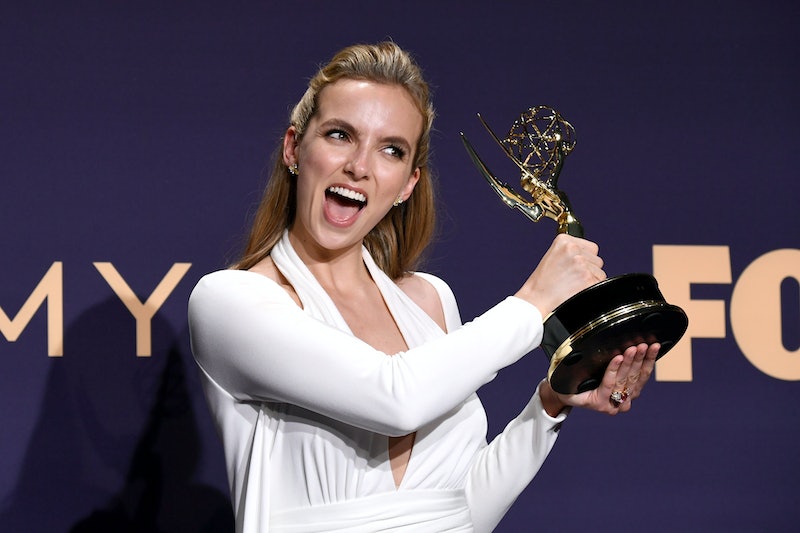 If you are obsessed with Villanelle from Killing Eve, then you're in luck because the upcoming third season will unravel even more of the fashionable assassin's secrets. In a recent cover story for Variety, Jodie Comer teased Killing Eve Season 3 and hinted that the upcoming episodes will delve even more into who Villanelle really is, and what she wants.

Though she admitted that she couldn't spill too many details about the new season, Comer — who took home an Emmy on Sep. 22 for her work on Killing Eve — did reveal that fans will see Villanelle in a "deeper sense" when it returns for the next season. "I was sworn to secrecy for Season 3," Comer said. "But what I’m really excited about are the emotions that Eve [Polastri, played by Sandra Oh] has stirred up within Villanelle. I think it triggers a lot. There’s still a lot of craziness going on, and Villanelle is up to her old tricks."

Describing Villanelle as "a blast" to play, Comer explained at another point in the interview that Killing Eve has been unraveling the many layers of her personality as the show has gone on. "Her outer shell is Villanelle. … Inside is the real person," she explained, comparing the character to a Kinder egg. "As the series goes on, we’re peeling that away and getting to the core of who she is, or her having to face the things she’s pushed down for so long."

Still, Comer was quick to note that despite all of the love that she and the show have received over the past few years, she never wants people to think that Villanelle will soon be redeemed. "She’s a bad person," Comer said. "We’re not excusing this person, ever." Considering that Season 2 ended with a cliffhanger that involved — Spoiler Alert — Villanelle shooting Eve and leaving her for dead, it's important to remember that despite the assassin's genuine affection for Eve, the pair are ultimately at odds.

Of course, that doesn't mean that Villanelle isn't conflicted about her relationship with Eve; in a recent interview with Entertainment Weekly, the actor reflected on why her character decided to shoot Eve in the back. "Villanelle is genuinely hurt in that situation, and she acts on impulse, the only way that she knows how to act," she told the outlet, reflecting on the way that power is constantly shifting between the two women. "When she walks away, she’s walking away."

"That’s something that we’re going to look at and have to think about," Comer teased of Season 3. "As we tap into this woman’s emotions more or getting into the psyche of what she does feel and what she doesn’t feel, it’s: what is it about this woman that has such a hold? Does she, in fact? There’s so much to delve into in regards to that." And, of course, there's one more important thing to consider in the wake of that cliffhanger: "We have to think about if she’s shooting her to kill her," Comer told EW.

There's still a lot that hangs in the balance for Villanelle and Eve in Season 3 — especially now that the assassin has turned the tables on the object of her obsession once again — but it seems clear that the new episodes will give viewers just as many questions as it does answers.