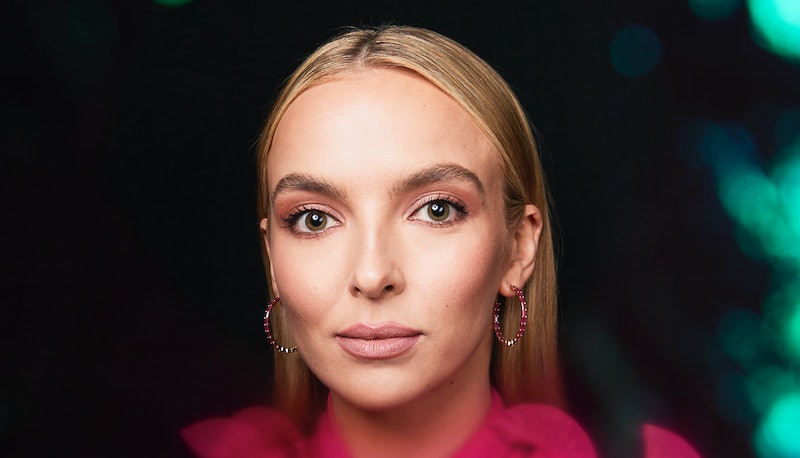 Killing Eve actress Jodie Comer is quickly becoming a national treasure in the UK. On top of being one of the most celebrated actors in British TV right now, the Liverpudlian star has also featured on her fair share of best-dressed lists, and her skin and makeup always seems to be on point. So I was pretty thrilled to learn that Jodie Comer revealed her beauty routine and favourite products in an interview with The New York Times.

Speaking to Bee Shapiro, who writes the publication's 'Skin Deep' column (which covers celebrity beauty routines and top tips), Comer revealed just how she gets her skin looking so flawless. As well as using products by Noble Panacea (a brand she is an ambassador for), Comer revealed she is a big fan of a Clarisonic brush, and is also faithfully devoted to London facialist Jasmina Vico.

Vico's treatments are well known for boosting the skin's glow, and Comer has been going to her for two years now. "It was through Jasmina that I became educated about the importance of skin care and how it can signal what’s going on in your body," she said.

"Like now, I recently changed my contraceptive, and my skin has gone crazy. I didn’t realize how much hormones can freak out," she added.

Comer discussed how, since lockdown, her skin has been changing due to being indoors all the time; something many of us have been experiencing. To combat this, she has been laying off the makeup: "I haven’t worn makeup for the past couple of weeks... When I’m on sets, they’re constantly reapplying makeup. It’s kind of nice to let my skin breathe."

The star has also previously talked about her love of SPF, which is a big part of her skincare routine. She told Town & Country Magazine that she wears it, "every day, rain or snow."

"I try and tell everyone how important this is, and they’re all like, ‘Shut up, I’m not putting 50 on when it’s thunder and lightning outside.’ And I’m like,'‘You can still get the damage!'"

As for makeup, it sounds as though the actress is all about the lips. As well as Nars Lip Crayons, she also loves a very particular shade of Pat McGrath lipstick.

"There’s a lipstick in a colour called Love Supreme. The shade is very close to my natural colour but a little bit more pink," she explained.

Love Supreme actually appears to be the name of a lipstick line by McGrath, but the shade 'Antique Rose' could be the one Comer loves as it's super subtle and pink.

And her favourite go-to brand? Hourglass. "You just can’t go wrong," she said. "I love the foundation sticks. They have a thick consistency, but I put it on the back of my hand and then put it on with my finger tips. I also have the highlighting palette. That’s always good for giving me the illusion of a healthy glow."

Don't mind me, I'm just off to stock up on every single thing Jodie mentioned...