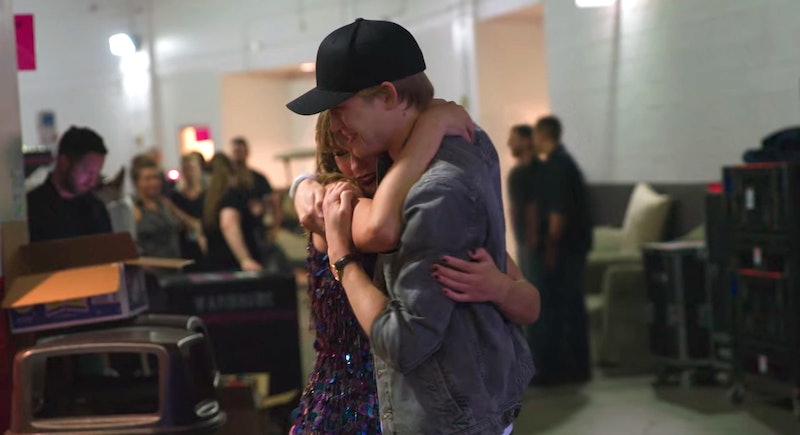 Jan. 31 is basically Christmas for Swifties, what with the release of Netflix's Miss Americana. And one of the biggest gifts beneath the Swiftmas tree is the glimpse at Joe Alwyn and Swift's relationship in Miss Americana. Alwyn's main appearance is brief, he's seen hugging her backstage after a concert. But just because Alwyn doesn't make a big appearance in the doc doesn't mean his influence on Swift wasn't felt in a major way by fans on Twitter.

About 35 minutes into the doc, Swift opens up about feeling lonely following the fallout of Kanye West releasing "Famous." But when she took some time away from the spotlight, she connected with Alwyn. While he's not referenced by name, Swift says, "I also was falling in love with someone who had a really wonderfully normal, balanced, grounded life. And we decided together that we wanted our relationship to be private."

Alwyn's videography skills then give the tiniest bit of insight into their private relationship. There's a clip of Swift kissing his hand while she drives in his home of the UK (why else is she on the left side of the road?!), hanging out with deer in (not out of) the woods, and blowing out the candles on a birthday cake he gave her. The most notable of these moments is her serenading him with "Call It What You Want." She giddily — and impressively, considering she's balancing an acoustic guitar on her lap — points her foot at him while singing the line, "I did one thing right," and mouths the words, "I love you" to him. Fans ate up these glimpses into her love story like Swift presumably ate that birthday cake.

Swift's lover™ only appears in the flesh in the already-infamous hug following her performance at MetLife Stadium on her Reputation Tour. The English actor stays mostly hidden under a black baseball cap, but his profile gets a cameo. That, combined with the fact that Swift had run into his arms and he gave her a kiss on the forehead, is all Twitter needed to melt into a love puddle.

Miss Americana is far from a deep dive into Swift's relationship with Alwyn — and that's clearly how this couple wants it, which fans could respect. Based on reactions, people on Twitter were simply grateful for the moments they did get to see these two lovebirds being happy together.

While more content of their life together would never be unwanted, a large theme in Miss Americana is that Swift has found balance in her life. Part of that balance is keeping some parts of her life away from the press, meaning fans will have to live off these few clips in Miss Americana until Swift's inevitable next song about Alwyn.