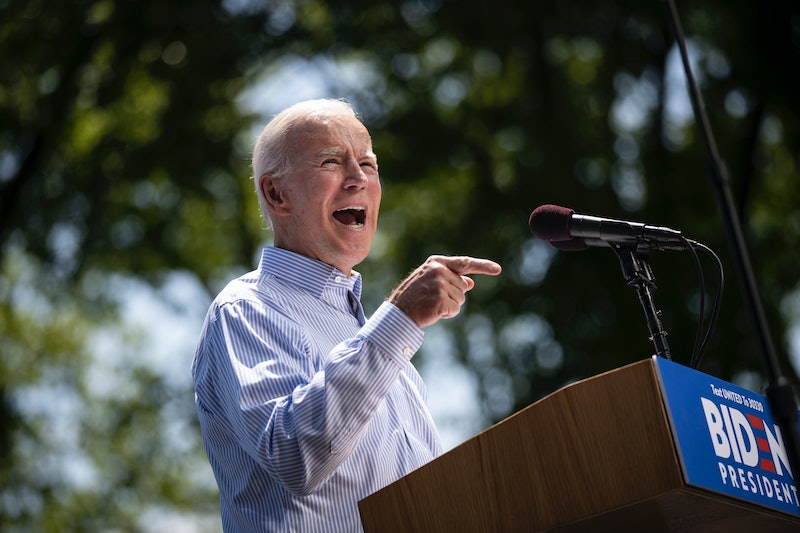 Speaking with LGBTQ advocacy group HRC on Saturday, one presidential candidate made promises to the community and appeared to indicate that the Trump administration played a role in the violence that transgender people face. In a speech marking the beginning of Pride month, former Vice President Joe Biden said the fastest way to end violence against trans people is to "end the Trump administration," CNN reports.

In a speech speaking about LGBTQ rights generally, Biden focused on trans rights and criticized moves made by Trump. "We've already had five, just this year, five black transgender women killed violently in 2019 — that's outrageous," Biden told the crowd in Columbus, Ohio, at HRC's annual fundraiser to cheers. "It must, it must, it must end. And the fastest way to end it is, end the Trump administration."

After that comment, Biden went on to reference some anti-trans Trump administration policies such as the transgender military ban and the moves to end protections for trans children in schools.

Deadly violence against transgender people has increased under the Trump administration in the United States, according to tallies by advocates. The highest number of murders of trans people recorded before Trump moved into the White House was in 2016 with 23 deaths, according to HRC. Under Trump in 2017, that number increased to 29 in 2017, HRC reports, and decreased slightly to 26 in 2018.

Carolyn Marie Weiss, a transgender advocate, tweeted that Trump alone did not begin the violence against trans people, particularly trans people of color. "Violence against trans women of color didn't start with Trump, and won't end when he's gone." Weiss wrote with a link to an article with Biden's statements. "But the support is appreciated just the same."

In addition to murders of trans people, hate crimes have also been rising under Trump — though the trend began under Obama — with the FBI's numbers for 2017 showing an increase of 17%, according to NBC News. The vast majority of those hate crimes were based on race, but those based on sexual orientation or gender identity made up more than 17% of the total, NBC News reported. Activists say that LGBTQ people of color experience compounded violence.

In other parts of his speech, Biden made promises that pointed to LGBTQ legislation being his top priority, specifically the Equality Act, which would protect all LGBTQ people from discrimination in a whole host of areas, from the workplace and housing to public accommodation. It would amend laws like the Civil Rights Act of 1964 to include sexual orientation and gender identity.

Biden said at the fundraiser that passing the Equality Act "will be the first thing I'll ask to be done" if he's elected president, according to The Sydney Morning Herald.

"You can get married because the Supreme Court now says that, but you can walk into your place of employment in so many states and be fired," Biden told the crowd, according to Axios. "It’s got to change, because of the values we have to demonstrate to the rest of the world. It’s got to change because it’s just morally wrong."

Trump marked the start of Pride Month for the first time — a first for any Republican president. "As we celebrate LGBT Pride Month and recognize the outstanding contributions LGBT people have made to our great Nation, let us also stand in solidarity with the many LGBT people who live in dozens of countries worldwide that punish, imprison, or even execute individuals...on the basis of their sexual orientation," Trump wrote on Twitter.

As for the Equality Act, Trump's officials have told reporters that he is opposed to the legislation.