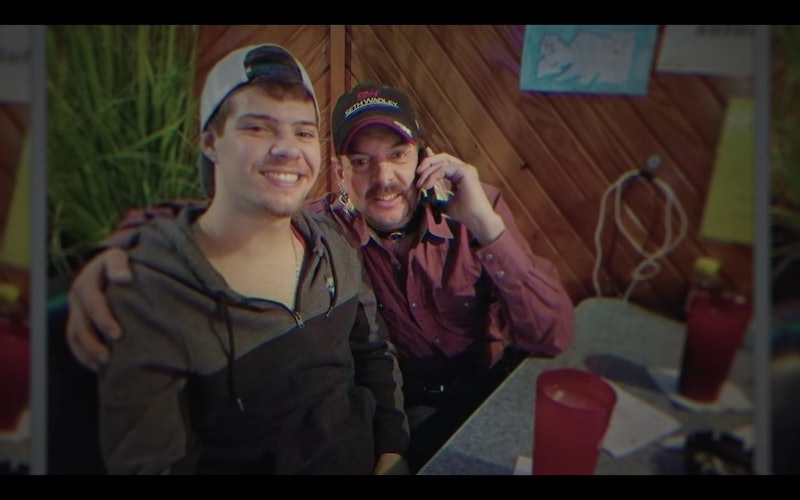 It seems like the world can't get enough of Tiger King right now — and Netflix is more than willing to give the people what they want. During his second appearance on Andy Cohen's SiriusXM radio show, Joe Exotic's husband, Dillon Passage teased Netflix's Tiger King bonus episode, hinting that it would be like a reunion episode. Netflix has yet to confirm the production of this extra episode. Bustle reached out to Netflix for details, but did not receive a response.

Reports that the streaming service was working on more Tiger King content first emerged on April 4, when Jeff Lowe — who currently owns the Greater Wynnewood Exotic Animal Park, the zoo formerly owned by Joe Maldonado-Passage (better known as Joe Exotic) — told a fan that Netflix was filming "one more episode" of the wild show. In a video for baseball player Justin Turner and his wife Kourtney Pogue, Lowe thanked the couple for watching the documentary series before adding, "Netflix is adding one more episode... [it] will be on next week." The businessman also teased that he and wife Lauren Dropla would be filming at the Oklahoma zoo the following day for the new episode.

Two days later, Passage — who married Maldonado-Passage in 2017 — confirmed that Netflix was making an additional episode of Tiger King during an appearance on Radio Andy. "It's going to be a live episode, kind of like a reunion," the 24-year-old revealed. However, Passage didn't have much more information than that to share, as he also revealed that he wasn't invited to appear. "Netflix didn't contact me to apart of that," Passage said. "I only spoke with one of the producers a little while about it because I was asking her. I saw an article saying there was gonna be another episode dropped and I was kind of curious."

Passage isn't the only one who won't be appearing in the Tiger King reunion episode; representatives for Carole Baskin recently told Entertainment Weekly that the Big Cat Rescue founder — and Maldonado-Passage's long-time rival — was uninterested in working with the streaming service ever again. "We have not been approached about a new episode and would not participate if asked," Baskin's team told the outlet in a statement.

It's also unclear whether or not Joe Exotic himself will make an appearance, given he is currently being held in isolation due to coronavirus concerns. However, Netflix recently released footage of a message from Maldonado-Passage from prison, so perhaps some of that interview will be incorporated into this new episode. You can't have an episode of Tiger King without the Tiger King, after all.

More like this
Here’s Everything Coming To & Leaving Netflix In October
By Jake Viswanath
Netflix's 'Bling Empire' Season 3 Trailer Includes A 'Selling Sunset' Cameo
By Kadin Burnett and Sam Ramsden
What’s New On Netflix: Ana De Armas’ 'Blonde' & A Nick Kroll Special
By Arya Roshanian
Here's How To Apply For 'Love Is Blind,' No Matter Where You Live In The US
By Grace Wehniainen
Get Even More From Bustle — Sign Up For The Newsletter