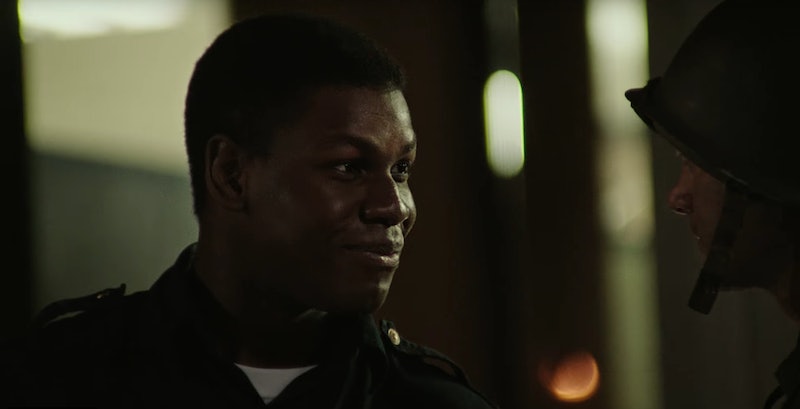 He may be fighting a totally different kind of war this time around, but John Boyega's role in Detroit may actually have more in common with his Star Wars character than you'd initially expect. The 25-year-old actor — who received critical acclaim for his breakout role as rebellious storm trooper, Finn, in the 2015 film Star Wars: The Force Awakens — has landed himself a pretty huge follow-up, scoring a lead role in the highly anticipated Kathryn Bigelow film, Detroit.

Judging from the movie's trailer alone, it appears that this latest role shares quite a few parallels with his Star Wars gig. In his latest venture, Boyega portrays an inner city police officer who finds himself caught in the midst of the 1967 Detroit riots, a crisis which resulted in one of the largest citizen uprisings to ever occur in United States' history. In total, the turmoil resulted in 43 deaths; 7,200 arrests; and saw the destruction of approximately 2,000 buildings, according to Mashable.

Boyega's character in the film, slated to be released in August 2017, is that of a black law enforcement officer, who appears to be torn between protecting the law and standing behind his community at the height of a racially tense event. The picture chronicles the real-life events, which took place during five days of intense rioting following a police raid on an unlicensed bar.

And although the storylines may appear different on the surface, Boyega's role in the new film feels surprisingly similar to the plight of stormtrooper Finn, who also found himself in the midst of chaos with the First Order, and ultimately fled the regime after witnessing unnecessary cruelty.

Although it still remains to be seen whether or not the actor's Detroit character will find himself standing against the opposition in the forthcoming movie, the Detroit trailer did leave a few subtle hints, giving the audience the power to draw their own conclusions.

At one point during the clip, Boyega's character can be heard speaking over the phone about the crisis. “I’ll sleep when they stop rioting,” he proclaims to an unknown caller. There is also a moment where it seems that the character finds himself at a bit of a stand-off with his fellow officers and may be facing his own bout with racism within the force. However, only time will tell what actually happens in this film.

In any event, this latest role certainly proves to be a huge stepping stone for the London-born actor, especially given the fact that Boyega was basically an unknown prior to his lead in the Star Wars film. Acquiring such a role certainly demonstrates that his star is rapidly on the rise as he takes on the main role in Detroit, heading up a cast that contains the likes of John Krasinski, Anthony Mackie, and Straight Outta Compton's Jason Mitchell.

I can't wait to see where Boyega's character's loyalty lies when the film hits theaters this summer.