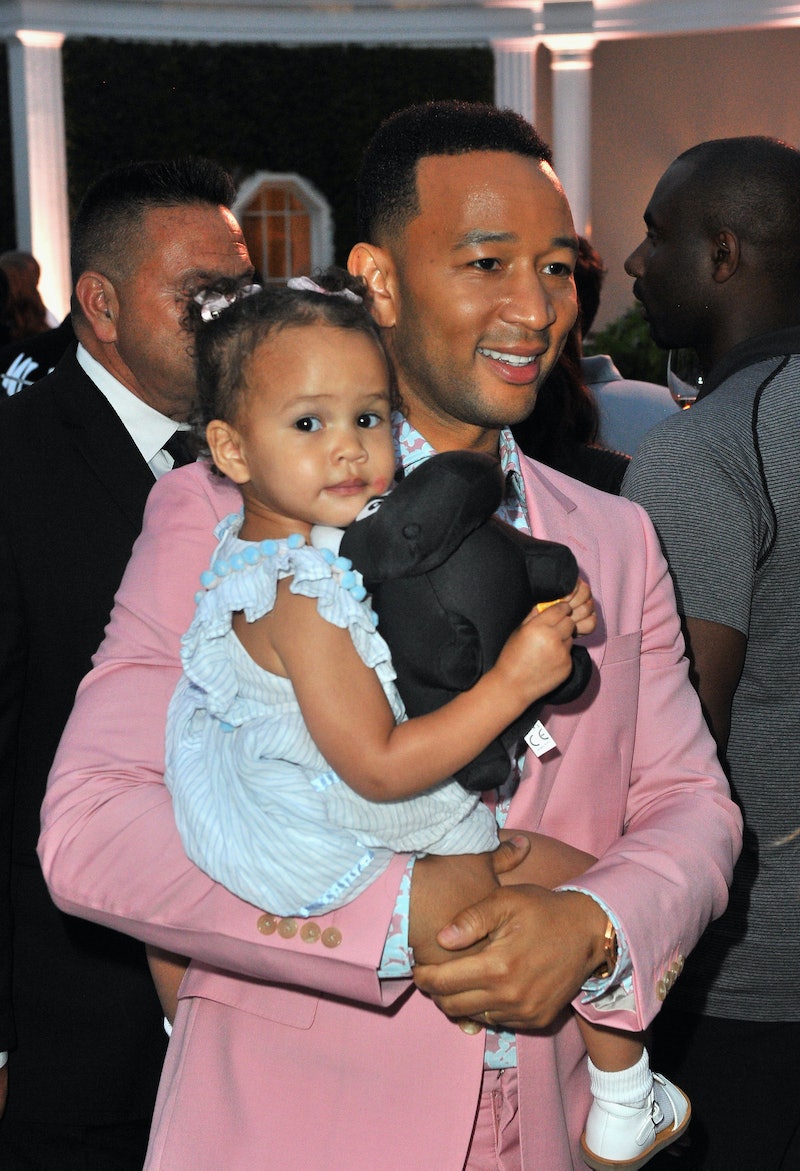 What recently had Chrissy Teigen wigging out on Instagram? That would be husband John Legend's adorable bonding time with daughter Luna, of course. Each taking turns donning the same Little Mermaid-inspired red wig, Legend and 2-year-old Luna seemed to be sharing some adorable belly laughs, as seen in the EGOT winner's social media posts. But the fun all went down — gasp — in Teigen's absence "[M]y babies are having too much fun without me 😩," she wrote, along with the same Instagram photos Legend had shared earlier on Jan. 25.

Exactly where was Teigen during all of this? According to the Cravings cookbook author's social media posts, she has been in Marrakech, Morocco for a "TOP SECRET PROJECT" with restaurateur David Chang. She also mentioned "filming something awesome in Morocco" in a recent Instagram Story post, as captured by People.

But back to Legend's first too-cute-for-words selfie, which he simply captioned "Friday night." In the pic, Luna had her head sweetly resting on her dad's chest, while the pair sat on a comfy-looking sofa. But then came time for the father-daughter duo to see what it was like to live like fiery redheads — or maybe just a curious, vocally gifted princess from under the sea.

In the first wig shot that Legend posted on Instagram, Luna is sporting a big grin — and flowing crimson locks, too, obviously — inside what appears to be a gym. "She loves this wig," Legend wrote in the caption for the two-photo post.

As for the second picture in the carousel, the EGOT winner decided to be part of Luna's world, trying on the wig himself, though he didn't rock it quite as well as his daughter. (The "All of Me" singer must've been going for a messier, more tousled look.) When Teigen's friend, hairstylist Jen Atkin commented, "Ummmm can I bring Cinderella a brush," the mom of two hilariously jumped in to respond, "why don't you just leave my family ALONE." (Side note: Atkin clearly must've meant Ariel, who, by the way, uses a dinglehopper, not a brush, right?)

Of course this isn't the first time that the toddler has channeled her inner Disney royalty. Most recently, Luna wore a pink princess dress while acting as her mom's "tough but ... fair" mini kitchen helper before a Jan. 20 family dinner. As seen in Teigen's social media posts, Luna reigned supreme when it came to rubbing the seasoning onto the ribs she and her mom were preparing. She also did a great job of keeping mom guessing which secret ingredients she needed.

Luna always seems to be enjoying quality time with her parents. Since little bro Miles was born last year, however, Luna's had to learn to share mom and dad's affection. "She loves [being a big sister],” Legend told Entertainment Tonight in June. “She’s very caring with him and sweet with him. She gets a little jealous every once in a while and she’ll make sure she gets my attention because she knows I’m paying attention to Miles.”

In a separate ET interview Teigen also revealed just how much of Legend's attention Luna tries to get. "She's definitely jealous of John and I," she quipped. "She's so protective of John and when we kiss, she, like, looks [up] from no matter where she is. You see her little dark eyes somewhere. It's a little scary."

All joking aside, these latest pics are just further proof that the Legends just may be the most adorable family ever.

More like this
Alec & Hilaria Baldwin Gave Their 7th Child Another Version Of The Name Hillary
By Stephanie Topacio Long
13 Photos Of The 'Blonde' Cast Vs. Marilyn Monroe & Other IRL Counterparts
By Marina Watts
9 Movies & TV Shows That Prove Stanley Tucci Elevates Everything He’s In
By Jake Viswanath and Radhika Menon
Stanley Tucci & Felicity Blunt’s Relationship Timeline Might Make You A Little Hungry
By Jake Viswanath
Get Even More From Bustle — Sign Up For The Newsletter