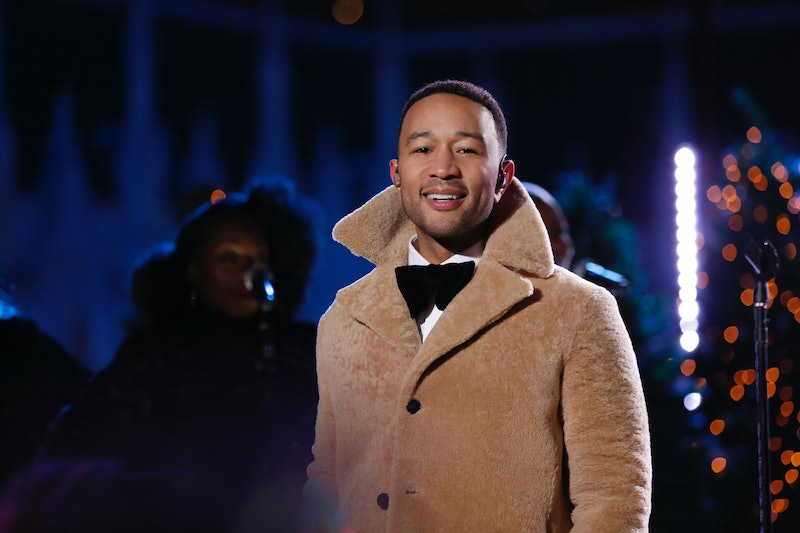 The holidays are all about tradition, but John Legend and Kelly Clarkson are giving one classic Christmas song a modern makeover for 2019. In Vanity Fair's recent cover story, it was revealed that Legend and Clarkson updated "Baby, It's Cold Outside" with new lyrics that focus on consent and get rid of the more problematic elements of the holiday hit. The 1944 duet, written by Frank Loesser, has been criticized in recent years for its "date-rapey" lyrics, and according to Entertainment Weekly, was pulled from rotation by a Cleveland, Ohio radio station in 2018.

In order to update the song for an expanded release of his 2018 holiday record A Legendary Christmas, Legend and Insecure star Natasha Rothwell wrote lyrics, which are much less predatory than the original. According to VF, the new duet still features Loesser's "fun and swinging" music, but with more sensitive lyrics. Clarkson sings at one point, "What will my friends think..." to which Legend responds, "I think they should rejoice." Clarkson's line continues, "...if I have one more drink?" before Legend sings, "It’s your body, and your choice."

According to a press release obtained by EW, Legend described his new take on the holiday classic as "a modern and irreverent narrative," with a focus on consent. The outlet also quoted more lyrics from the chorus, in which he offers to call Clarkson a car "and tell them to hurry" in order to get his duet partner home safely.

While Legend decided to give "Baby, It's Cold Outside" a modern update this Christmas, Loesser's daughter Susan told NBC News in 2018 that the song was simply a product of the time in which it was written. "Absolutely I get [the criticism]. But I think it would be good if people looked at the song in the context of the time," she said, adding that "flirting was a whole different thing" in the 1940s. "People used to say 'what’s in this drink' as a joke. You know, this drink is going straight to my head so what’s in this drink? Back then it didn’t mean you drugged me."

Still, Legend's update makes sense as the singer has been an outspoken advocate for victims of sexual abuse, particularly in relation to the allegations against Harvey Weinstein and R. Kelly (both men have repeatedly denied the claims against them). In January, dream hampton — who created the docu-series Surviving R. Kelly about Kelly's alleged sexual abuse of women and minors — praised Legend for being one of the few famous faces willing to denounce the singer on camera.

"To everyone telling me how courageous I am for appearing in the doc, it didn't feel risky at all," Legend wrote on Twitter at the time. "I believe these women and don't give a f*ck about protecting a serial child rapist. Easy decision." Shortly after the series aired, Legend called for consequences for Kelly on social media, explaining that he felt the only appropriate actions were to "Believe the victims, expose the rampant predatory behavior, career destruction and indictment with convictions hopefully in the future."

In the VF piece, Legend explained that Kelly had been "canceled in [his] mind" long before he was asked to be a part of Surviving R. Kelly. "A few years ago, we had a party at the house and we had a DJ playing music. R. Kelly came on and I walked up to the DJ and said, 'We don’t play him in this house.'"

Regardless of how listeners feel about "Baby, It's Cold Outside" and its original lyrics, Legend's decision to update the song for 2019 feels like a clear extension of the singer's beliefs and ongoing advocacy work. Fans can hear Legend and Clarkson's modern duet when A Legendary Christmas: Deluxe Edition is released on Nov. 8.

More like this
Cat Burns Explores A Deeply Personal Struggle In “People Pleaser”
By Catharina Cheung
Prince Harry Incorrectly Recites Christina Aguilera’s “Genie In A Bottle” Lyrics
By Jake Viswanath
Austin Butler Recalls Lisa Marie Presley Showing Him Elvis’ Bedroom
By Jake Viswanath
Linda Ronstadt’s “Long Long Time” Plays A Pivotal Role In The Last Of Us
By Brad Witter
Get Even More From Bustle — Sign Up For The Newsletter
From hair trends to relationship advice, our daily newsletter has everything you need to sound like a person who’s on TikTok, even if you aren’t.

This article was originally published on Oct. 29, 2019