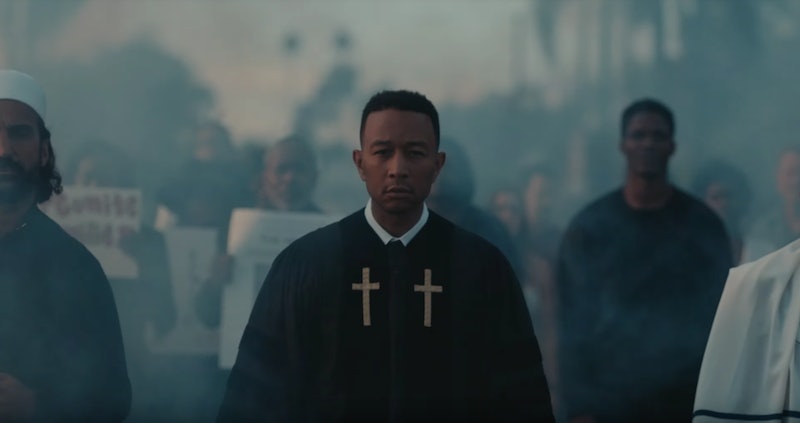 John Legend is ready to practice what he preaches, and he's using his music to inspire others to follow in his footsteps. On Friday, Feb. 15, Legend released a new single "Preach," along with a powerful video. The video itself is full of thoughtful imagery about modern injustices — family separation at the border and police shooting unarmed black men — but it's more than just a music video, it's also a vehicle for charity.

Legend's "Preach" is the first clip to use YouTube's fundraising feature, per a press release obtained by Bustle, to encourage viewers to donate to FREEAMERICA after watching the video. The EGOT-winning musician launched the FREEAMERICA campaign in 2015 in order to help end mass incarceration in the United States, a cause that he has been passionate about for years, and the "Preach" fundraiser has a goal of raising $50,000 for the organization over the next year.

"The idea behind the song is that sometimes we can get so frustrated by the news and what’s going on and there’s this scatter going on in ourselves," Legend said, per the press release. "Do we become apathetic? Do we become engaged? Do we just talk about it, or do we do something?"

The video asks this very question, as it kicks off with Legend laying in bed next to wife Chrissy Teigen, staring at the ceiling, before feeling compelled to get up and walk out into the world to see what's going on around him.

"Heaven knows I'm not helpless, but what can I do / I can't see the use in me crying if I don't make the change I want to see," Legend sings, as the camera shows children running through a gymnasium from an implied school shooting. The "Preach" video also shows the singer reflecting in the pews of a church while a young black man is pulled over by the police, and a Border Patrol officer pulls a small child away from her crying mother.

Though the video — which was directed by Dominique DeLeon — never shows any actual violence onscreen, the pain of all of the incidents is felt by viewers, as they watch high schoolers run terrified through hallways and locker rooms and a mother sob against the chain link fence as her daughter gets taken away. Meanwhile, Legend, dressed as a preacher in a nod to the song's chorus, stands with other religious leaders in a protest against a line of police officers who look ready for a fight.

However, the most devastating part of the video is the story of the young black man, who is shot by officers while his friend, who was also pulled out of the car, hysterically films the incident. Legend is shown mourning his loss and serving as a pallbearer at his funeral, echoing the incredible toll that the deaths of unarmed black men have on the families and communities of the victim. At the very end of the clip, however, the victim is seen sitting on top of the police car, wearing angel wings, as Legend is seen laying back in bed once again, contemplating all of the horrors in the world.

While "Preach" is the first time that Legend has used a music video as part of a fundraiser for the FREEAMERICA campaign, the singer has a long history of speaking out against injustice in this country, and fighting for the rights of others. In February of 2015, when he and rapper Common received the Best Original Song Oscar for "Glory," the two musicians used their speech to advocate for prison reform.

In June, Legend and Teigen used President Trump's birthday to encourage people to donate to the ACLU in protest of the administration's immigration policies, explaining that every member of their family donated $72,000. "John and I are outraged to see and hear the horror stories of immigrant families seeking asylum and refuge in America being ripped apart due to the inhumane policies of the Trump administration. ... The ACLU is committed to defending the rights and humanity of these vulnerable families," Teigen wrote in a statement that the couple shared on social media.

Throughout his career, Legend has made it clear that he thinks its important to use his platform to advocate for the causes that he believes in. And hopefully, with the release of "Preach" and its powerful music video, he can encourage more people to advocate for change in their own lives, and practice what they preach.