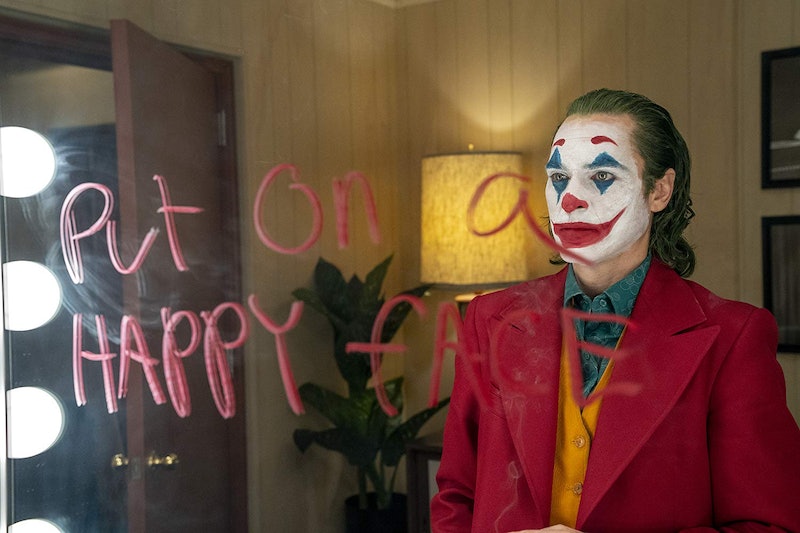 Post-credits scenes are a device that's come to be expected in superhero films, especially in the Marvel Cinematic Universe. Audiences wait patiently after the rolling credits in the hopes of getting some clue as to what's going to come next. But if you're hoping to see what happens to the Joker after the Todd Phillips-directed origin story, which premieres Oct. 4, you're not going to find it at the end of the movie. There's no need to wait around after the screen goes black because Joker doesn't have a post-credits scene.

Unlike the MCU films which are all connected via a singular timeline, not all DC films are related, and a Joker post-credits scene isn't necessary as the film is meant to be a standalone film. Per ComicBook.com, Phillips said at a Q&A at the Toronto International Film Festival, "[Joker's] not really connected to that [DC Extended] Universe." He continued, "And it was really intentionally not. I mean the original idea when I went to [Warner Bros.] with the idea was not just about one movie, but about a label — sort of a side label to DC, where you can do these kind of character study, low-rent, low-budget movies, where you get a filmmaker to come in and do some deep dive into a character. So it was never meant to connect, so I don't see it connecting to anything in the future. I think this is just this movie, you know?"

Whether Joker will be the start of that trend — or label, as the filmmaker said — is still to be seen. But Philipps has debunked rumors that a second Joker film is in the works. "We have no plan for a sequel," director Phillips told reporters at a post-screening press conference, per IGN. However, it seems that he might change his mind, were star Joaquin Phoenix willing to come back. Speaking with Total Film magazine, per GamesRadar, Phillips said, "One thing I will tell you: I would do anything with Joaquin, any day of the week. There’s nobody like him. If he was willing to do it, and if people show up to this movie, and Warners came to us and said, ‘You know what? If you guys could think of something…’ Well, I have a feeling that he and I could think of something pretty cool."

The director addressed that quote at the September Q&A, also per IGN. "The quote was, 'I will do anything Joaquin wants to do,'" Phillips said. "And I would. But the movie's not set up to [have] a sequel. We always pitched it as one movie, and that's it."

It doesn't make complete sense, anyway, for Phoenix's Joker to potentially continue on and become the Joker that young Bruce Wayne (Dante Pereira-Olson) faces in the future. As ScreenRant points out, there would be at least a 30-year difference between the villain and his arch-nemesis, and it seems physically impossible for the Joker to be able to keep up with Batman if that were the case. Inverse shared a fan theory put forward by Reddit user Thracius_Augustus, which suggests that the events in Joker inspire a copycat who wind up being the Joker that the Dark Knight chases around Gotham City. Totally possible... or we'll just never hear from Arthur Fleck ever again.

But if you were wondering whether Joker might include hints about any upcoming DC films — particularly the new Batman movie starring Robert Pattinson — it doesn't. So you can head to your local theater restroom in confidence.

More like this
Everything You Need To Know About ‘Black Panther: Wakanda Forever’
By Bustle Editors and Radhika Menon
The 'PLL: Original Sin' Creators Say A’s Identity Will Be “Very Clear” By The Season Finale
By Alyssa Lapid
'The Sandman’s Ending Is A Departure From Neil Gaiman’s Comic Book Series
By Kadin Burnett
Gabby & Rachel Reveal How That 'Bachelorette' Rose Ceremony Twist Happened
By Grace Wehniainen
Get Even More From Bustle — Sign Up For The Newsletter