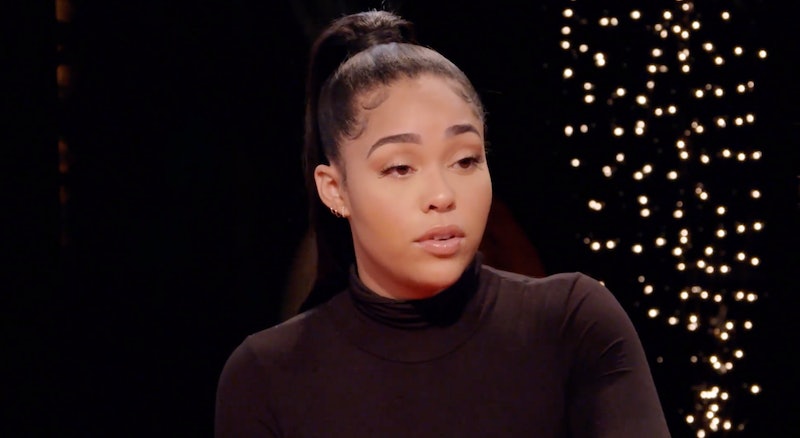 Jordyn Woods' Red Table Talk interview finally aired on Friday, and the model got candid about what really happened — and didn't happen — between her and Tristan Thompson. Woods' comments about Khloé Kardashian show how much she cares for the reality star and sympathizes with her amid the whole scandal.

After explaining what happened the night she went to a party at Thompson's house, Woods expressed sympathy for Kardashian. "She doesn't deserve this, either," Woods said of the Good American co-founder while wiping away tears. "You know, people have even dehumanized her in this situation, to where they don't, they can't feel for her. And it's not fair that she has to deal with this, either. And the last thing I wanted to do was be that person."

Woods added that she was "no homewrecker" and "would never try to hurt someone's home." The model also complimented Thompson and Kardashian's daughter, True, calling her "beautiful."

In the interview with Jada Pinkett Smith, Woods also said that she never slept with Thompson, and that it was "never a consideration" in her mind. "Never will I," Woods told Pinkett Smith. "And that's why I'm willing to be put up to the test. Attach me to a lie detector, whatever it is — I need people to know the truth."

Woods told the Girls' Trip star that even though she hadn't slept with Thompson or given him a lap dance, the NBA player did kiss her as she was leaving his party the next morning. As for why Woods didn't tell Kardashian about the kiss straightaway, she claimed that she was "trying to protect Khloé's heart."

Pinkett Smith also asked Woods if she's talked to Kardashian since reports about the rumored cheating broke. "I have spoken a little bit with her," Woods said while wiping away another tear. "I let her know that I'm willing to do whatever it takes for her peace of mind. Not for my image, not for my career, because that's already something in its own." The model added that "there was no malicious intent" to any of her actions, and there's been "no communication" between her and Thompson. (Bustle reached out to Thompson's agent about Woods' latest comments, but did not receive an immediate response.)

Pinkett Smith asked Woods directly if she thought that she was "the reason why Tristan and Khloé are not together." Woods responded:

Kardashian doesn't seem to agree with Woods' statements, though. Shortly after the Red Table Talk interview was posted on Facebook Watch, Kardashian tweeted that Woods was "lying." The Keeping Up With the Kardashians star wrote,

"Why are you lying @jordynwoods ?? If you're going to try and save yourself by going public, INSTEAD OF CALLING ME PRIVATELY TO APOLOGIZE FIRST, at least be HONEST about your story. BTW, You ARE the reason my family broke up!"

Woods seems to empathize with Kardashian over the scandal, but it looks like the reality star doesn't feel the same way. Kardashian and Woods have known each other for years, but it sounds like their relationship might really be over.

Kardashian's tweet comes after an Instagram post that seems to be about Thompson and Woods, too. "Remember: they cheated because they wanted to, they lied because they could, and now they're sorry because they got caught. It's always about them. You did nothing to cause or deserve it," Kardashian wrote in her Instagram Story on Thursday.

Rumors about Thompson reportedly cheating with Woods started on Feb. 19, when Hollywood Unlocked and TMZ reported the news. That same day, Us Weekly and E! News confirmed that Thompson and Kardashian had broken up.

One person who's stayed (mostly) silent on the matter is Thompson. There aren't any tweets or Instagram posts from Thompson about the rumors currently, although he did tweet and delete the words "FAKE NEWS" in reference to the reports about him and Woods, according to E! News.

And while Woods did express her regret over the situation, she also pointed out that she's the one taking the majority of blame and criticism here. "I've seen what has been done to my life in only a week, based on how the media circulates," Woods said to Pinkett Smith. "They're putting their focus on a young Black woman who made a mistake, and not a mistake that's worth public crucifixion. It's a mistake that should have been dealt with internally."

Woods' statements are a reminder that it's pretty unfair to only blame her for what supposedly happened. The backlash against Woods shows a double standard about how she's being treated, versus how fans are talking about Thompson, and it should make fans think twice before slamming her online. She and Kardashian might not be on the same page, but it looks like they agree on one thing: This is a matter that should have been dealt with privately, and not in the public eye.