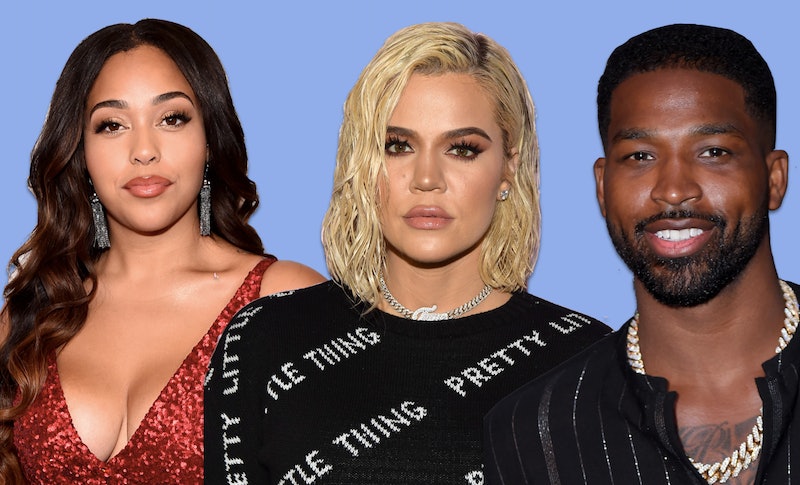 If you've spent any time on the internet in the past week, it's been near-impossible to escape headlines about the latest Tristan Thompson cheating scandal. After reports surfaced claiming the NBA player cheated on Khloé Kardashian with Kylie Jenner's best friend Jordyn Woods, there have been endless updates about how the famous family is handling the situation. But among the analysis of cryptic Instagram comments and supposed shade, there's been a majorly unfair trend: Woods and Khloé are getting the bulk of the blame, whereas few people online are actually holding Thompson accountable for his supposed behavior.

To be clear, the cheating has not been confirmed, but TMZ and Hollywood Unlocked claimed last Tuesday that Woods and Thompson reportedly hooked up at a party on Feb. 17. Bustle previously reached out to reps for Khloé, Thompson, and Woods for comment on the reports, but did not hear back. On Friday afternoon, though, Woods is scheduled to appear on Jada Pinkett Smith's Red Table Talk to clear the air, while Khloé has posted her fair share of Instagram Story quotes with direct references to betrayal, cheating, and heartbreak throughout the past week.

While Khloé's posts have implied her anger at Thompson and his supposed actions, in the court of public opinion it's as if these women solely brought the drama upon themselves. For instance, take a quick scroll through Twitter and you'll find people attacking Woods, painting her as the ultimate betrayer. The jokes at her expense range from memes suggesting she threw away her future to very blatant slut-shaming. And just as easily, you'll find those who fault Khloé, saying she deserved it to be cheated on, considering this isn't the first time she's faced an infidelity scandal. Yet you know whose name is missing in any of those examples? Thompson's.

Woods is a 21-year-old woman, who may or may not have made a one-time mistake. Khloé is a 34-year-old mother, whose focus has been on maintaining a supportive environment for her daughter's sake, which also meant letting Thompson back into her life after prior claims of cheating. Yet for some reason, so few people are holding the 27-year-old man, and father of two, responsible for any wrongdoing.

While there have been a handful of people pointing out this wild double standard, that part of the conversation truly hasn't been amplified enough.

Even the way the Kardashian-Jenner family's inner circle is approaching the situation puts the focus solely on the women involved. Khloé's best friend, Malika Haqq, responded to an Instagram meme about Woods by writing, "These hoes aint loyal." According to Elite Daily, Haqq also referred to Woods' behavior as "coward like" in another comment. Meanwhile, Kim Kardashian's BFF Larsa Pippen wrote, "Can’t wait to see which version of her story she tells. Hope it’s the same she told @khloekardashian when she checked her," on a post about Jordyn's upcoming interview.

Sure, they probably just want to have Khloé's back publicly, but why drag down another woman in the process? Especially one who's a decade younger than all of them. The absence of Thompson's name is noteworthy here as well.

Of course, if Woods did, in fact, cheat with Thompson, that's understandably hurtful for Khloé and the rest of her family. She's like another sister to the KUWTK crew, even modeling for Khloé's clothing line, Good American. And Woods is responsible for her actions; she's an adult, after all. But the way she's been bashed on the internet by family friends and fans alike — while Thompson has gotten away seemingly scot-free — is more than a little unsettling.

It's especially surprising that Woods is facing the bulk of the blame, since this isn't the first time Thompson supposedly betrayed Khloé's trust. When Khloé was nine months pregnant last spring, grainy photos and videos accompanied reports that Thompson had repeatedly been unfaithful. While he has never publicly addressed the incident, Khloé literally live-tweeted the Keeping Up With The Kardashian episode that discussed the cheating allegations.

And as if she hasn't been through enough, there are also some saying that Thompson cheating is "karma" for Khloé, because of previous rumors she "stole" the athlete away from his then-pregnant ex-girlfriend, Jordan Craig, in 2016. However, it's unclear what the state of Thompson's relationship with Craig was when he and Khloé first met. And regardless, the common denominator here is still — guess who? — Thompson.

Society is so quick to vilify women and pit them against each other, versus holding men responsible for their decisions to be unfaithful. (Remember how everyone reacted to the Jay-Z and Beyoncé cheating scandal by viciously going after "Becky with the good hair" suspects? Or what about the Angelina Jolie vs. Jennifer Aniston debate surrounding Brad Pitt's rumored affair?) Of course, no one should be attacked in the first place. These are people most of us have never met IRL, nor will we. But taking a step back and reassessing how we're all discussing this situation is a solid step.

To say that Khloé "deserved it" or that Woods is a monster leaves out a very relevant third party — and the one who supposedly decided to disappoint the mother of his child publicly yet again. It's a majorly unfair blame game, and the internet really needs to do better.