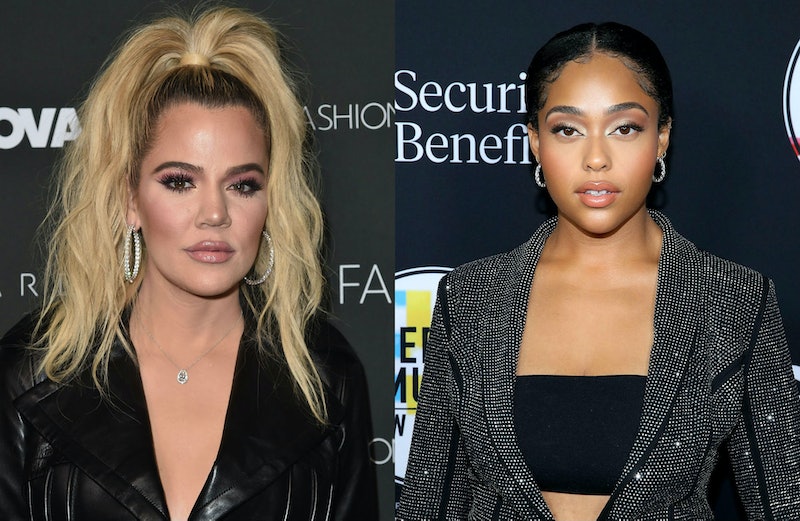 Despite recent rumors surrounding the Kardashian-Jenner family involving Kylie Jenner's best friend and Tristan Thompson, there's no denying Khloé Kardashian and Jordyn Woods have shared many moments together over the years. Seeing as how Jenner and Woods have been friends since around 2013, it only makes sense that Woods has become a big part of her BFF's family. When someone is close to one Kardashian and/or Jenner, they typically become tight-knit with everyone else, too.

Many have become greatly invested in Kardashian and Woods' relationship as of late, due to TMZ's report from Feb. 19 detailing cheating allegations involving Thompson and Woods. Furthermore, multiple outlets reported the same day that the Keeping Up With the Kardashians star and the professional athlete recently split. At the time of the breakup reports, both Us Weekly and E! News confirmed the split. (Bustle reached out to reps for Thompson, Kardashian, and Woods, but did not receive an immediate response.)

According to E! News' report from Tuesday, Thompson responded to TMZ's cheating claim by tweeting and deleting a message that read, "FAKE NEWS." As for Kardashian, she hasn't directly commented on either the breakup or cheating rumors. However, the reality star did post emojis on an Instagram post from Hollywood Unlocked, which alleged Woods and Thompson spent time together at a party recently.

Kardashian and Thompson's split hasn't been confirmed by the couple themselves, and neither have the cheating allegations involving the NBA star and Woods. But for those wondering about Kardashian and Woods' relationship, here are a few moments showcasing just how far back they really go.

They've Known Each Other For Awhile

This photo is from five years ago. Woods' caption reads, "Thank you to these beautiful humans for taking me to this beautiful place. LOVE ❤️."

Kardashian was proud to have her sister's best friend join her clothing line.

They Even Celebrated Birthdays Together

Yep, they both partook in the festivities.

Especially when it came to her Halloween costumes.

Woods has been considered an extremely close family friend for a long time.

Kardashian's Referred To Her As "Auntie Jordy"

Woods always been seen as an aunt to Stormi, Jenner's daughter with Travis Scott.

At the time of reporting, this was Kardashian's most recent comment she made on one of Woods' Instagram posts. Her reply was made two days prior to the cheating allegations reported by Hollywood Unlocked and TMZ.

Amongst all of the rumors circulating, one thing remains certain — Kardashian and Woods have been a huge part of each other's lives over the years. Their history is filled with many great moments of love and support. And while it's definitely unfortunate to read about the allegations, it's also worth remembering that the reports involving Kardashian, Thompson, and Woods still remain unconfirmed at this point in time.