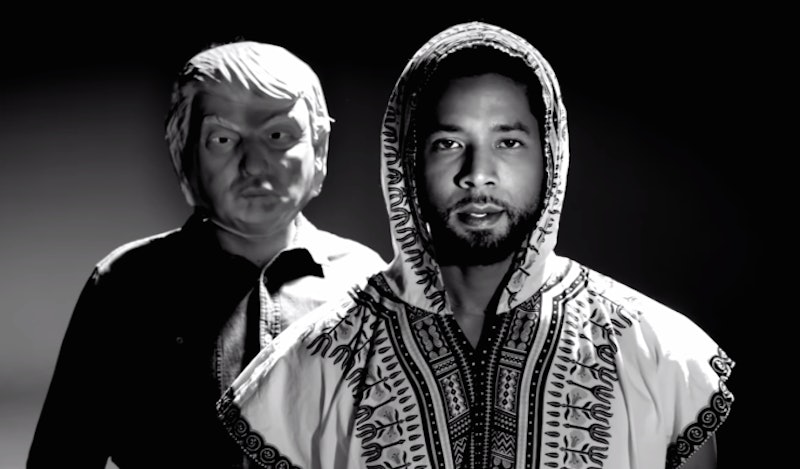 Just when I started to get over the initial shock of Snoop Dogg's politically charged video for his single "Lavender," Empire star Jussie Smollett released a music video that has brought me back to all of the feels. The singer and actor presented the visual for his latest track "F.U.W." (which stands for "F*cked Up World") on March 15, and it has so much depth. And after one watch of Smollett's latest video, anyone can piece together that he's had enough.

Smollett being vocal about our current political climate comes as no surprise, however. The talent uses his platform to speak up about injustices plaguing the world quite often — I just didn't expect for him to touch on all of them in one video. Police brutality, ableism, and the Flint and Standing Rock water crises are just a few of the many topics highlighted, and they all work to create one beautifully, cohesive, and thought-provoking piece of work.

The "F.U.W." video was directed by the singer himself, and in a press release, Smollett made it clear that the song isn't part of the new album or just a way to bring more hype to Season 3 of Empire. According to NBC News, he said, “This is not a single. It’s not a song to promote the series. It’s an artistic expression."

Further elaborating on how it's bigger than that, Smollett continued,

“My view of this sick cycle, an era in which we must fight our way out of before it’s too late."

"This view of unity is something they may never understand," he added, according to NBC News. "That is why it is up to us. Train your daughters and sons to be soldiers of love, despite and in spite of this F*cked Up World.”

One may think that the video was a little too busy, but I, on the other hand, think that it's brilliantly inclusive. Smollett just placed us in the passenger seat of his hopes and dreams. He's aware of the world, and knows that at the end of the day, the only people that can save us are ourselves. And that's a messag that I can get behind.