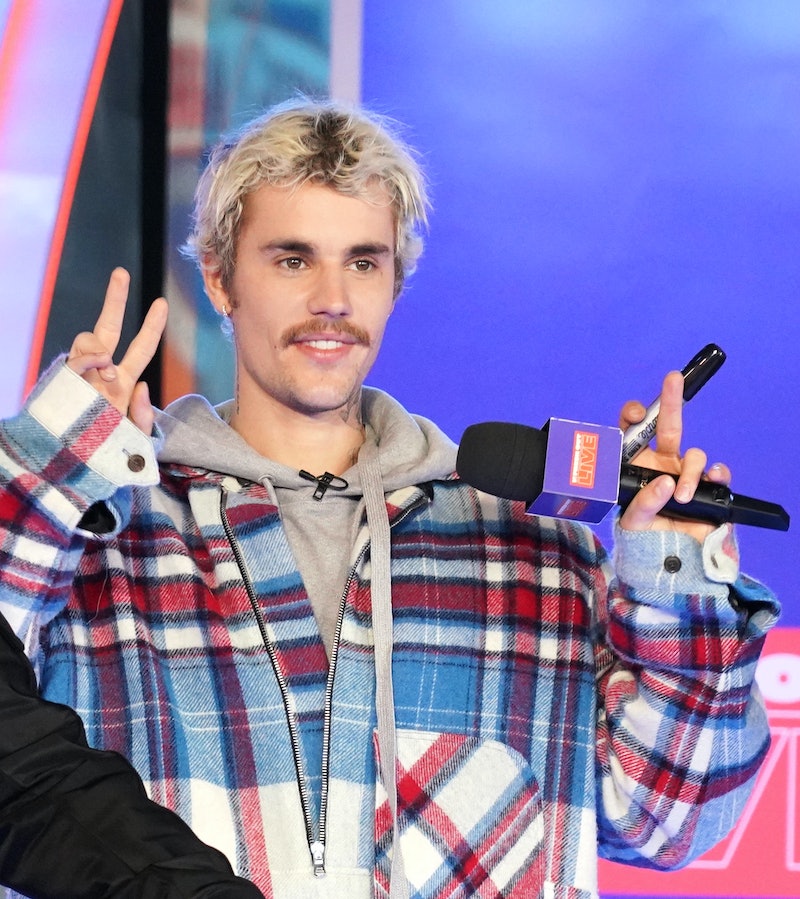 Biebs is using his money for good. Following the release of his uplifting "Intentions" music video, Justin Bieber surprised a fan with a $100,000 donation for her mental health awareness work. "I think a lot of us . . . me included, forget to set intentions, you know?" the singer explained to host Sway Calloway on the Friday, Feb. 7 installment of MTV's Fresh Out Live. "We, as humans, get caught up in our everyday, you know, struggles and worries, and I think what we set our intentions on makes a difference on the outcome of our life and the quality of life that we live."

Bieber made his own good intentions known after co-host Jamila Mustafa introduced him to audience member Julie Coker, a superfan who devotes her time to being a peer mental health advocate at New Jersey's Stockton University, as well as acting as an Active Minds leader. After inviting Coker up to the stage, the musician pulled out a Sharpie and signed a giant $100,000 check made out in her name. MTV explained in a press release provided to Bustle that Coker will use the surprise gift to help her launch a career giving back as a social worker.

In addition to telling the the stories of three graduates of a Los Angeles transitional housing program in his "Intentions" music video with Quavo, Bieber further helped establish a $200,000 Intentions Fund to support the families at the clip's Alexandria House. The Grammy winner, who is dropping his Changes album on Feb. 14, also recently committed $1 per ticket sold for his upcoming tour to the Bieber Foundation in support of mental health and wellness programs.

"I wanted to just basically shine a light on, you know, issues that people are often overlooking," Bieber elaborated to Sway during his Fresh Out Live interview. "People are marginalized and overlooked, and I just wanted to make people aware of, you know, the hurting and broken people that are suffering in humanity and really do my best to just make a difference in the best possible way I could."

The "10,000 Hours" singer has openly discussed his own mental health struggles in the past. People reported in Feb. 2019 that Bieber was receiving treatment for depression, and in an Instagram post the following month, he explained that he was "very focused on repairing some of [his] deep rooted issues" he'd had. "Music is very important to me," Bieber wrote, addressing fan demand for a new album. "But nothing comes before my family and my health."

As Bieber had promised would be the case when he was ready, his new album release is just a few short days away. Now that he seems to have found his own footing, Bieber's paying it forward to help others do the same.

More like this
Everything You Need To Know About ‘Black Panther: Wakanda Forever’
By Bustle Editors
Hailey Bieber Just Responded To *That* Viral Met Gala Moment
By Radhika Menon and Sam Ramsden
Everything To Know About Taylor Swift’s 10th Studio Album, 'Midnights'
By Grace Wehniainen and Jake Viswanath
How Ghosts Inspired Kesha’s New Music
By Jake Viswanath
Get Even More From Bustle — Sign Up For The Newsletter