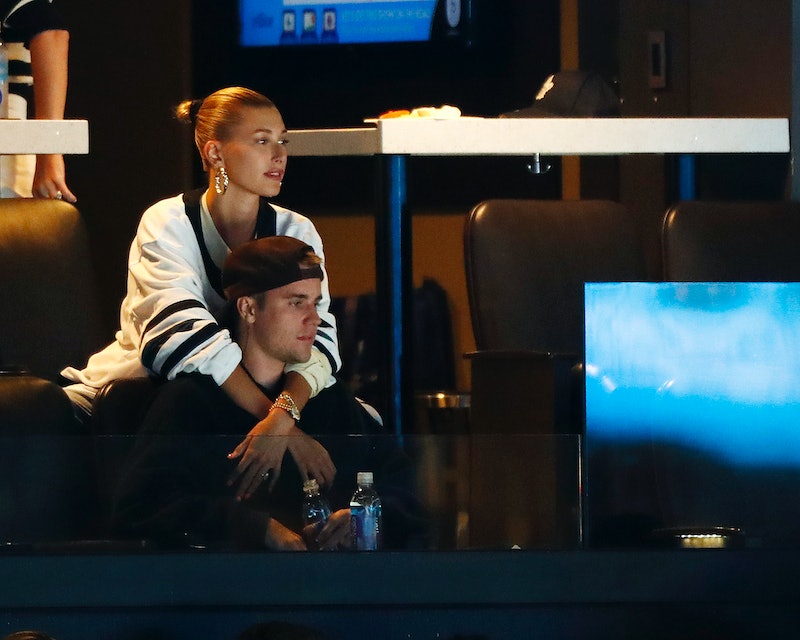 It's been over a year since Justin Bieber and Hailey Baldwin tied the knot in secret, but now, it seems like they're getting ready to do it all over again. According to People, Bieber and Baldwin left for their South Carolina wedding on Saturday. Bieber and Baldwin first tied the knot in New York on September 13, 2018. Now, it seems they're getting ready to celebrate with their friends and family on a much larger scale, if the private jet on Bieber's Instagram is any indication.

On Saturday, Bieber dropped the first clue that he was headed somewhere special by posting the photo of his jet, featuring a welcome mat from his Drew House line. Of course, at the time, he didn't say that he was headed out to his own wedding, but the reports make it pretty clear that's exactly what's going on — especially since he's also been using his Instagram to joke about the tux he will wear on his big day.

Although the couple hasn't shared many details about their upcoming celebration themselves, insiders have told People that the wedding is being held at Palmetto Bluff. According to the magazine, the entire Montage Palmetto Bluff hotel on the property has reportedly been rented out for the occasion from Sunday, Sept. 29, to Tuesday, Oct. 1, and the wedding is expected to take place sometime on Monday. Unfortunately, the specifics have still been kept under wraps, although Kendall Jenner and some of Baldwin's other friends did throw her a bachelorette party last week, hinting that the wedding date was fast-approaching.

It also seems like Bieber's been looking back on his history with Baldwin in preparation for the nuptials as well. Early on Monday, Sept. 30, he shared a throwback photo with Baldwin and her parents, which was taken long before the singer or then-aspiring model ever guessed they would one day become family.

In the pic, Bieber and Baldwin are posing with Bieber's mom, Pattie Mallette, as well as Baldwin's parents, Stephen and Kennya Baldwin. Judging by Bieber's hair in this pic, it seems like it was taken towards the beginning of his career, which means this may have been taken one of the first times they met. According to what Baldwin told Vogue in February, she and Bieber met in 2009, when she saw Bieber perform on the Today Show. But, contrary to popular belief, the model insists she was never really a Belieber. "I was never a superfan, of him or of anyone," she told Vogue. "It was never that crazed, screaming thing. I didn't think about it in any kind of way except for the fact that he was cute."

Over the weekend, Bieber also shared a separate throwback photo of just him and Baldwin together on his Instagram. And since Bieber and Baldwin are wearing similar outfits, there's a chance that this photo could have also been taken at the same event as the one that included their respective parents. "My wife and I," Bieber wrote in the caption. "Where it all began."

From 2009 to 2019, Bieber and Baldwin's love story has certainly evolved over the years. Here's hoping their wedding photos are just as cute as the ones of their first encounter all those years ago.

More like this
Who Is Camila Cabello Dating? She's Getting Cozy With Lox Club CEO Austin Kevitch
By Radhika Menon
Gwendoline Christie’s Partner Is Part Of Royal Family History
By Parry Ernsberger and Sophie McEvoy
Kanye West Has The Most Kanye Reaction To Kim Kardashian & Pete Davidson's Split
By Jake Viswanath
Kim Kardashian & Pete Davidson’s Reported Breakup Has Twitter Running Wild
By Brad Witter
Get Even More From Bustle — Sign Up For The Newsletter