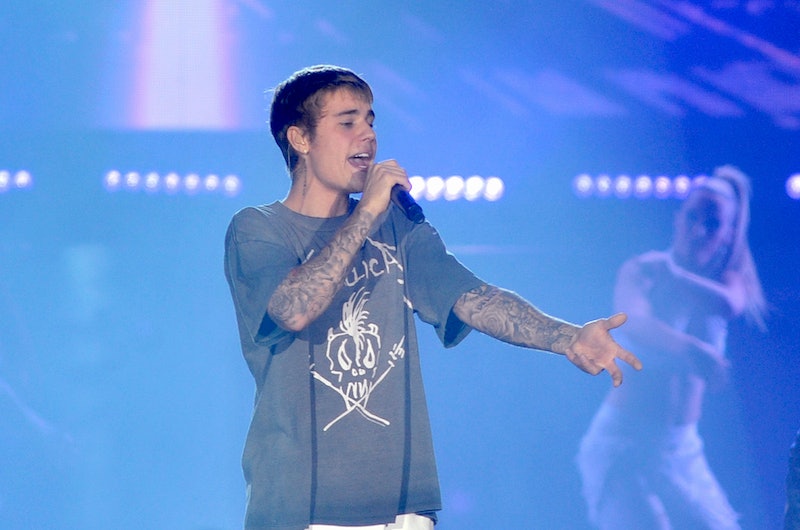 Get your liking thumbs ready, Beliebers, because Justin Bieber said he will release his album before this Christmas if he rakes in enough likes on an Instagram post. On Sunday, Oct. 27, the “What Do You Mean?” pop star announced on Instagram that he is “almost done” with his fifth studio album, and he will drop it if he gets 20 million likes on that very IG announcement. Whether it comes out before Christmas or not remains to be seen, but when Bieber's to-be-released fifth album does arrive, it will be his first since 2015's Purpose. At the time of writing, Bieber's post has over 8 million likes.

In March, Bieber shared a long post on Instagram in which he talked about his mental health, taking care of himself, where he was at emotionally during his last tour, and whether or not he has more music coming down the pike. He wrote, "Music is very important to me but Nothing comes before my family and my health. I will come with a kick a** album ASAP."

And it sounds like it really will be here ASAP. As Billboard reported on Oct. 7, Bieber took a minute during a recent Instagram Live session to talk about releasing a new album. Per Billboard, he said, “I’m putting out an album this year!” Hailey Baldwin then asked him if he meant he would put out an album before the current calendar year draws to a close, and he replied, “Should I put an album out this year?” They went back and forth about whether or not a 2019 Bieber album is in the tea leaves, but the couple seemed to hint that at least a new song, if not an entire record would be out within the next few months.

Bieber has been keeping busy ever since Purpose was released nearly four years ago. He has appeared on chart-toppers like “I’m the One” by DJ Khaled featuring Quavo, Chance the Rapper, and Lil Wayne. He lent his vocals to the remix of Luis Fonsi and Daddy Yankee's hit “Despacito.” He has teamed with artists such as BloodPop, Ed Sheeran, and Dan + Shay. After teasing what was to come with a pair of smiley face slippers, his clothing line, Drew House, launched in early 2019, and he and Baldwin had two weddings, including an elaborate event in South Carolina. A source recently told Us Weekly that Bieber has been in the recording studio and is "determined to release more new music by the end of the year, possibly even a full album if all goes to plan."