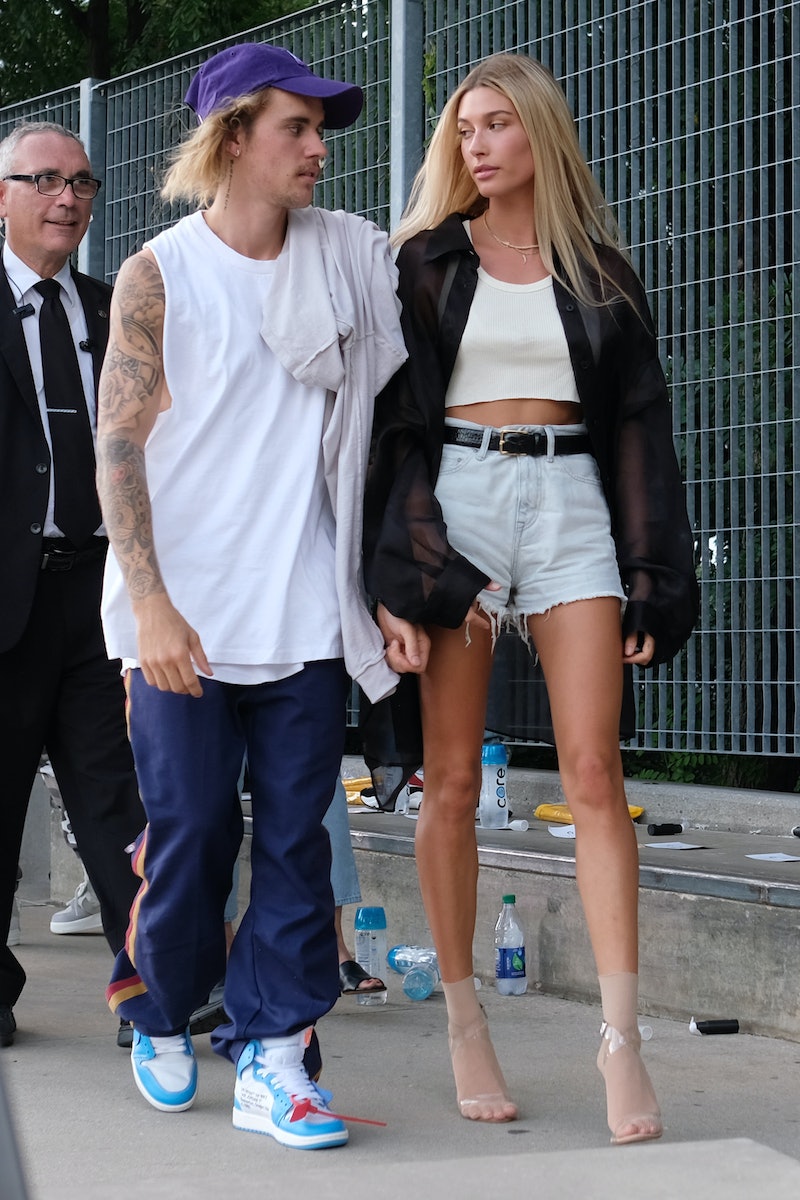 Just in case you were wondering, Justin Bieber and Hailey Baldwin are still going strong — and despite how busy their schedules probably are, they're still making time to go on dates together. On Wednesday, Bieber shared a photo from his date night with Baldwin on Instagram, and in his caption, he mentioned their future children. It doesn't sound like they're planning to expand their family right this second, but could it be on the horizon?

In the photo, Bieber and Baldwin are standing side by side, chatting with someone out of the frame, as Bieber holds a beer and Baldwin wears a pair of Minnie Mouse ears. He wrote:

"Love dates with you baby.. one day Ill be doing daddy daughter dates..... not hinting at anything soon I’m not in a rush. i just wanna enjoy you by yourself for a while! #Disneyworld."

For the record, despite what his hashtag says, Bieber and Baldwin were actually at Disneyland, not Disney World — Disney's California Adventure, to be exact. Fans on Twitter captured more photos of the couple on their night out, and they both seemed to be all smiles the entire time. Then again, this is Disneyland, so who wouldn't be smiling?

Baldwin commented on the photo herself, writing, "Always have the most fun with you," along with a red heart emoji.

It's sweet that Bieber made mention of the quality time he'll spend with his future daughter down the road, although he did make it clear that we shouldn't expect them to have babies anytime soon. Going out one-on-one with his kids will probably be such a special memory for them both, and in the meantime, he and Baldwin seem to be having plenty of fun, just the two of them.

This isn't the first time that Bieber has mentioned being a dad in the future — not counting his ill-received April's Fool's Day prank when he posted a sonogram with absolutely no explanation on Instagram earlier this year, later revealing it had been a joke. In the past, Bieber has opened up about wanting to be a good husband and father, and in March, he attributed the break he took from music to wanting to take the time to put his health and family first, including his future kids.

"I have been looking, seeking, trial and error as most of us do, I am now very focused on repairing some of the deep rooted issues that I have as most of us have, so that I don’t fall apart, so that I can sustain my marriage and be the father I want to be," he wrote at the time. "Music is very important to me but Nothing comes before my family and my health."

It'll be fun to watch Bieber and Baldwin become parents someday, especially if he documents those daddy/daughter dates he mentioned and shares them on social media. His relationship with Baldwin is truly adorable, and hopefully, there are many more Disneyland date nights in their future.

More like this
James Cameron May Come To Regret His 'Titanic' Door Experiment
By Stephanie Topacio Long
Melanie Lynskey Plays A “Ruthless Leader” In 'The Last Of Us'
By Brad Witter
The History Of Taylor Swift's "All Too Well" & What The Lyrics Actually Mean
By Jake Viswanath
The Meaning Of Steve Lacy’s “Bad Habit” Lyrics
By Radhika Menon
Get Even More From Bustle — Sign Up For The Newsletter
From hair trends to relationship advice, our daily newsletter has everything you need to sound like a person who’s on TikTok, even if you aren’t.