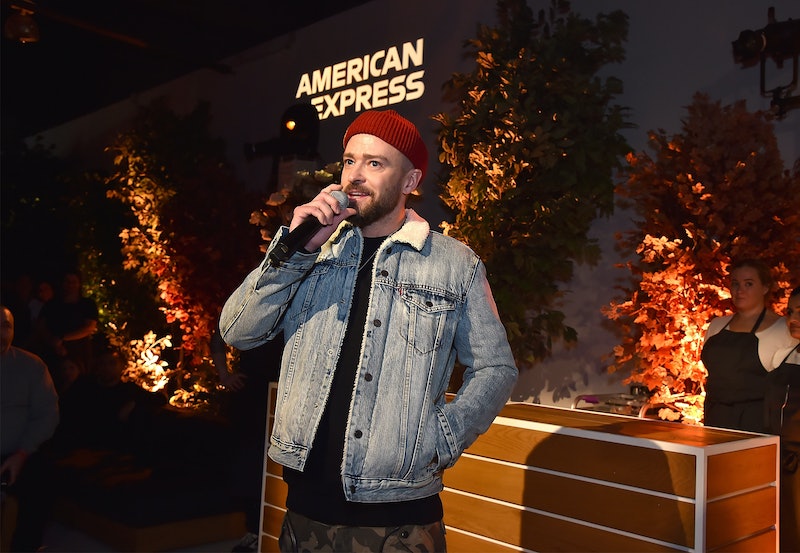 As it turns out, Justin Timberlake isn't just expanding his fan's musical palate with his new album Man Of The Woods; he's expanding their literal palate, too. Because Timberlake's fans were served bugs at his listening party in New York City on Tuesday and Wednesday. Why? Well, because he's now a musical wilderness man who is trying to give Bear Grylls a run for his money, or something. Who knows really, but fans who were treated to JT's new music at the American Express-partnered party — attended by Bustle Entertainment News Editor Kerensa Cadenas — were also given a menu that had a few bug-filled treats. But while this all might sound a little gross to those who suffer from a deep fear of bugs, it was actually a high-class dining experience.

The menu featured six different locavore delicacies like crispy cabbage, watercress, wild beach plants, and pork crackling, chocolate, dried berries. Two of the dishes actually included bugs: ants with black garlic and rose oil; and the æbleskiver and grasshopper, which is a traditional Danish dessert that "resemble round pancake balls with a doughnut-like texture," according to Serious Eats. These particular bug dishes were from the Copenhagen restaurant, Noma, where chef René Redzepi is known for foraging and fermenting locally sourced ingredients.

And they do it well, considering that the restaurant has been awarded the top spot on the World’s 50 Best Restaurants list not just once, but four times since 2010. That's probably why Greg Morabito, the pop culture editor over at Eater, joked, "JT is a man of the woods — specifically, the woods around one of the world's best restaurants." Only the best for Timberlake's fans, clearly.

After the party, fans couldn't help but talk about the menu. Some seemed unfazed by the "fancy bugs" considering that they were more shocked by the fact that they were in the same room with Timberlake. "I ate bugs and JT said 'what's up' to me. There was eye contact," one fan tweeted. Meanwhile, others weren't that impressed by their bug delicacies. "When you’re stuck in a room for 2 hours without a phone and served a menu of grasshoppers and ants," Us Weekly editor Jennifer Person tweeted, "you’re at a private listening party for Justin Timberlake’s new album ‘Man of the Woods.’"

The Independent's Ilana Kaplan, though, did what anyone would do after a meal of ants and crickets. "Tonight I heard the new Justin Timberlake record, ate grasshopper and told Jessica Biel how much I love The Sinner," she wrote. "Now I'm going to eat pizza."

The funny thing is that most fans didn't seem that surprised by Timberlake and his bugs, and that might be because he's been pretty extra with this album release. The Man Of The Woods album teaser showed him becoming one with nature by posing in rivers and running through cornfields. His video for "Filthy" showered him dressing up like Steve Jobs and confusing all the nature-lovers out there. His latest video for "Supplies" shows him going more Blade Runner than backwoods. So, if anything, this bug-filled menu is the most on-brand stunt he could have pulled: a literal wilderness approach to the listening party for Man Of The Woods.

Variety reported that the Tribeca space where the party was held was decorated with bushes and trees to get that outdoorsy feel, and, according to a press release, all proceeds from the event were donated to the Parks & Recreation Foundation. Which, let's be honest, makes sense. This listening party might also be a hint of what fans can expect when Timberlake headlines the Super Bowl Halftime Show on Feb. 4. After all, he'll be taking the stage in the chilly tundra of Minneapolis, MN, where they probably have a lot of delicious bugs.