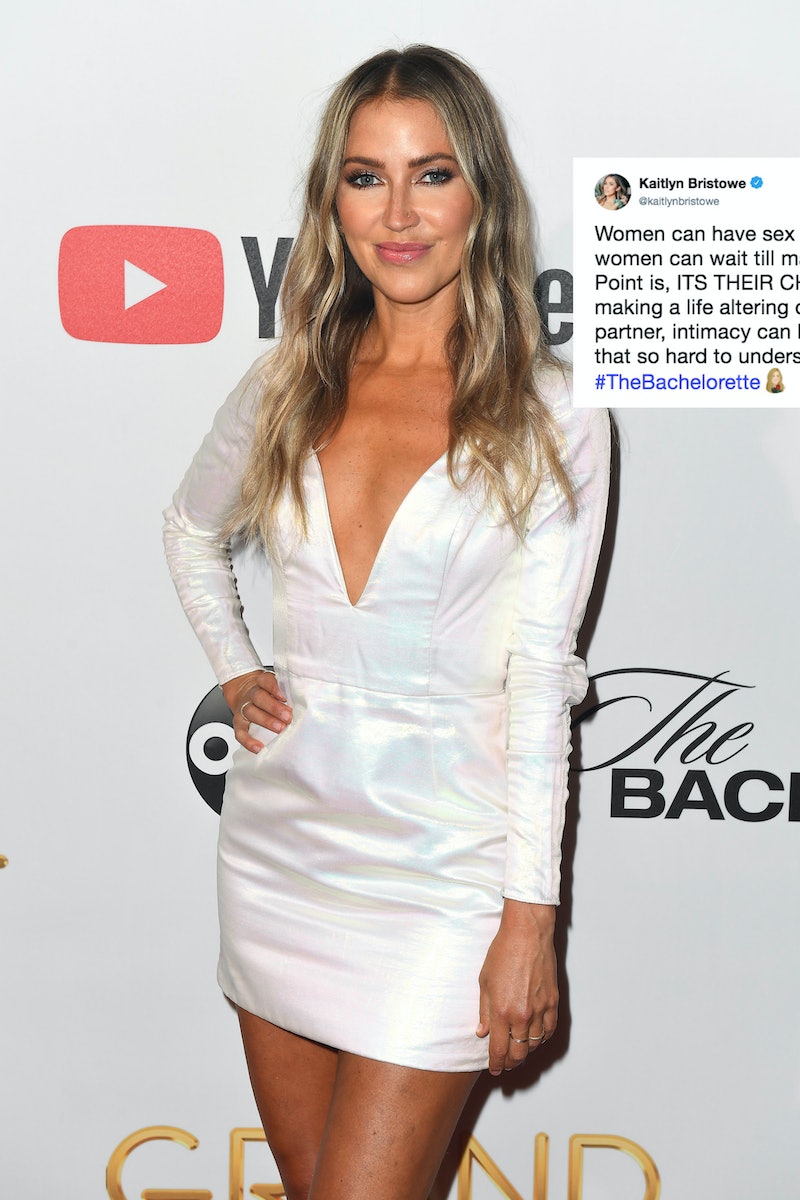 As Bachelorette fans have seen, looking for love on reality TV is difficult. Aside from actually filming the show, it's tough dealing with the critics. One person who knows all about this is former Bachelorette Kaitlyn Bristowe, who recently defended Hannah Brown from slut-shaming on Twitter.

It all started when a fan tweeted on Tuesday night, "@kaitlynbristowe was the best bachelorette of all time and would have THRIVED as #thebachelorette in the 2019 social climate." Kaitlyn responded, "I definitely did not thrive in my time haha but I’m so happy to see women supporting Hannah."

Even though there are many viewers supporting Hannah, there are also plenty of critics voicing their opinions as well. Hannah has received criticism from Bachelorette alum James Taylor, who tweeted that she should not "dry hump em all" last week. And that was before a recent Bachelorette promo aired with Hannah revealed she "f*cked in a windmill." She even admitted she did it twice. Most people applauded her for being so open, but unfortunately she did receive some criticism.

During her 2015 season, Kaitlyn had sex with contestant Nick Viall before the fantasy suite dates and was highly criticized for doing so. On her episode of Men Tell All, host Chris Harrison even read some of the mean tweets out loud, which actually included death threats.

A Bachelorette viewer pointed this out to Kaitlyn and drew parallels between backlash both women received during their seasons. This person tweeted, "Girl have you looked at Hannah’s social media and bachelorettes social media? Women are coming after her and slut shaming her like they did to you. It’s so upsetting to see."

If anyone can understand the scrutiny that Hannah has been subjected to, it's her. Kaitlyn took a sex-positive stance in support of the current Bachelorette lead in a July 2 tweet:

"Women can have sex if they choose, and women can wait till marriage if they choose. Point is, ITS THEIR CHOICE. When you’re making a life altering decision to find a life partner, intimacy can be important. Why is that so hard to understand?"

Aside from sticking by Hannah for her decisions, Kaitlyn also emphasized that it's OK to take another path if that's what women want to do. She fully supports a woman waiting until marriage if that's what they choose to do.

Kaitlyn broke stereotypes during her refreshingly honest season of The Bachelorette and there are many people who view Hannah's season in a similar light. Kaitlyn even responded to one fan who made a similar comparison between the two seasons with a tweet that supports Hannah's openness and encourages other "important conversations" that should be had on the show — and more importantly in relationships in general.

Aside from Hannah's openness about sex, she's also received backlash for her choice in men. Regarding that aspect, Kaitlyn encouraged viewers to support Hannah, even when they don't agree with her choice in love interests since "regrets are life lessons, which result in self compassion and growth."

Seriously, where's the compassion for Hannah? It's as if every person watching this show has never been romantically interested in someone who wasn't a "good choice." If anything, there are plenty of viewers who should realize they relate to Hannah because of this, instead of kicking her while she may be down. That's exactly the point Kaitlyn made.

In response to another fan's tweet, Kaitlyn pointed out that so many of us have dated someone not worthy of our time. Just imagine doing this on a very popular reality TV show.

More like this
Gabby & Rachel Reveal How That 'Bachelorette' Rose Ceremony Twist Happened
By Grace Wehniainen
Everything To Know About 'Bachelor' Host Jesse Palmer
By Justice Namaste and Radhika Menon
A First Impression Rose Didn’t Save Mario From Going Home On 'The Bachelorette'
By Kadin Burnett
Why Did Meatball Leave 'The Bachelorette'? His Second Chance Didn’t Last Too Long
By Grace Wehniainen
Get Even More From Bustle — Sign Up For The Newsletter