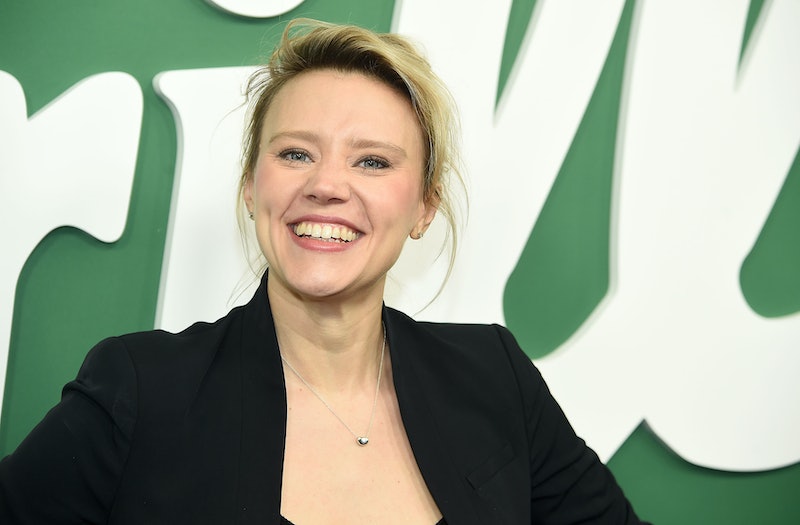 Her Saturday Night Live costar Aidy Bryant did it with Shrill, and now it's apparently her turn. According to Deadline, Kate McKinnon will star as Elizabeth Holmes in a new Hulu miniseries. The Dropout show is reportedly based on the ABC News podcast of the same name that documented the meteoric rise of Holmes and her fraudulent blood testing company Theranos. Although this true story is certainly bizarre enough to be a comedy, The Dropout will be a drama. So get ready to see McKinnon like you've never seen her before when this miniseries hits Hulu.

Since 2012, McKinnon has portrayed a slew of real-life figures like Hillary Clinton, Ellen DeGeneres, Ruth Bader Ginsberg, and even Justin Bieber on SNL. She's even won two Emmys for her performances on the sketch comedy show. But while those impersonations are usually more hilariously absurd than super-duper accurate (for instance, Jeff Sessions as an opossum), McKinnon is ready to show off her dramatic range as Holmes in The Dropout.

While there aren't many details, the miniseries is expected to be between six to 10 episodes and will follow how Holmes went from the youngest self-made female billionaire in the world to facing federal criminal charges of fraud. What this means is that you should prepare for McKinnon to go truly, deliciously dark for her portrayal.

As The Hollywood Reporter noted, The Ghostbusters and The Spy Who Dumped Me star is also executive producing The Dropout alongside the creator and host of the podcast, Rebecca Jarvis. Jarvis is the chief business, technology, and economics correspondent for ABC News and she launched the six-episode podcast through ABC Radio in January 2019. For the more visual, The Dropout also became a two-hour 20/20 documentary special in March. And based on reports, it seems the streaming service Hulu will be giving Holmes' story a similar treatment to its current show The Act by using the podcast to create a scripted series about her alleged crimes.

In 2015, college dropout Holmes was named the youngest and richest self-made female billionaire by Forbes. But within a year, the publication went from valuing her net worth at $4.5 billion to absolutely nothing. Her wealth had been based on her company Theranos that claimed it could conduct blood tests with just the amount of blood that comes from the prick of the finger. Holmes' technology looked like it would change the future of medicine forever and she seemed like the next Steve Jobs. However, the tech didn't work and as The New York Times reported, she was indicted on charges of fraud in June 2018.

As the last installment of The Dropout podcast documented, Holmes has pled not guilty to these charges of federal criminal fraud and her trial date hasn't been set yet. But she could face up to 20 years of prison time depending on what knew about the flawed tech. So Holmes' story is still ongoing. But that hasn't stopped the media's fixation with her.

In March 2019, HBO dropped the documentary The Inventor about her. And Jennifer Lawrence is supposed to play Holmes in the Adam McKay movie Bad Blood, based on the nonfiction book of the same name. But considering that the film Bad Blood was announced over three years ago, McKinnon's interpretation on Hulu might come first. And it's not only time that McKinnon has been given such a meaty role, but it will be incredibly fascinating to watch this versatile comedic actor undergo such a dramatic transformation.

More like this
Why Sadie Sink Is Hopeful Max Will Return In Stranger Things Season 5
By Brad Witter
'Schitt's Creek' Star Sarah Levy Named Her Baby Boy After Her Famous Father
By Jake Viswanath
What Working At Marvel Is Really Like, According To A 'Ms. Marvel' Co-Creator
By Gretchen Smail
'Friends' Creator Marta Kauffman Opened Up About Misgendering A Guest Character
By Grace Wehniainen
Get Even More From Bustle — Sign Up For The Newsletter