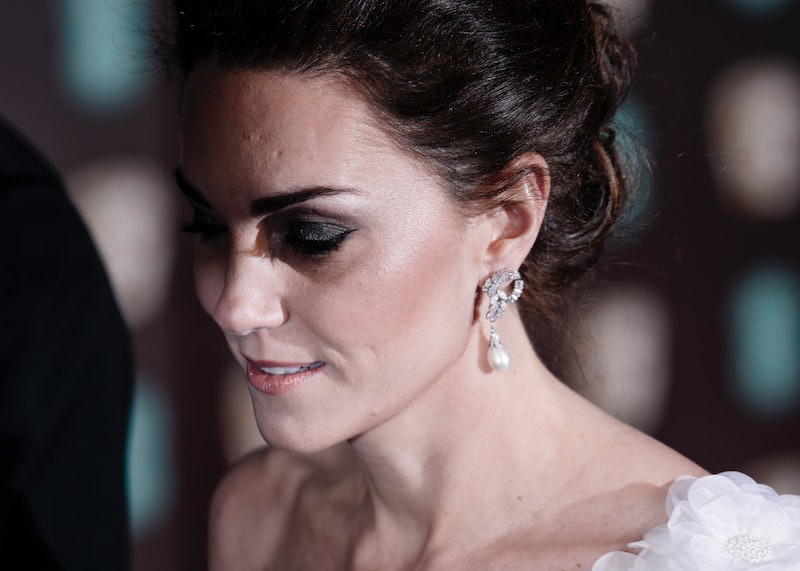 Princess Diana's style is timeless, as the Duchess of Cambridge has been proving time and time again. Kate Middleton wore Princess Diana's jewelry to the BAFTAs, wearing her late mother-in-law's iconic pearl earrings.

But these aren't your average pearl studs. The heirloom accessories feature a diamond cluster design accented with South Sea pearl drops dangling at the ends. They were a favorite of Princess Diana's, who wore them frequently throughout the '90s, putting them on, for example, during a New York trip back in 1995 with a black cocktail dress, or during a 1996 trip to Sydney with a cobalt blue frock. She wore them all over the world — from Japan to Pakistan — but most notably dressed up in them for her last official royal engagement, which was attending Swan Lake at the Royal Albert Hall in 1997. Now Middleton has brought the pearl earrings into the modern times, donning them on an awards show red carpet.

The Duke and Duchess of Cambridge made an appearance at the BAFTAs in London this week, which is hosted by the British Academy of Film and Television Arts, and honors the movies and filmmakers of British cinema. Prince William wore a tux and bow tie that called for the occasion, while Middleton turned to one of her favorite designers and donned a white, ethereal gown made by Alexander McQueen.

The off the shoulder dress had a toga-like appearance to it, and the shoulder had a cluster of tulle flowers to tie together the elegant but whimsical feel of the piece. The simple drop earrings were the perfect accessories for the look, veering towards the Duchess's simple and elegant tastes.

This isn't the first time that Middleton has worn the late Princess's jewelry collection. For starter's, her 12-carat diamond and sapphire engagement ring originally belonged to Diana, which was chosen by Prince Charles for their engagement in 1981. It was then given to Middleton by Prince William when he proposed to her in 2010.

Meghan Markle's engagement ring also has a piece of the royal's personal jewelry collection in it, where Prince Harry designed her ring using two diamonds from his mother's stash. Then on the actual wedding day, Markle paid tribute to Diana by wearing her aquamarines cocktail ring as her "something blue" during their evening reception. It was originally given to Diana by Prince Charles as a wedding present, which made it all the more special to wear during their big day.

In addition to her engagement ring, Middleton has also worn other pieces from her mother-in-law's jewel collection. Just last month, when the Duchess went to Dundee in Scotland for an official visit to the V&A Museum, she wore Diana's sapphire and diamond earrings, which also happen to match her engagement ring perfectly.

Middleton also dons the late Princess's tiaras regularly during formal royal events, where she has a penchant for the Lover’s Knot tiara in particular. Crafted in 1914 for Queen Mary, Queen Elizabeth loaned it to Princess Diana as a wedding gift in 1981, and Middleton has since worn it on several occasions.

From pearl drop earrings to tiaras, Middleton has brought her mother-in-law's jewelry collection into the 21st century.