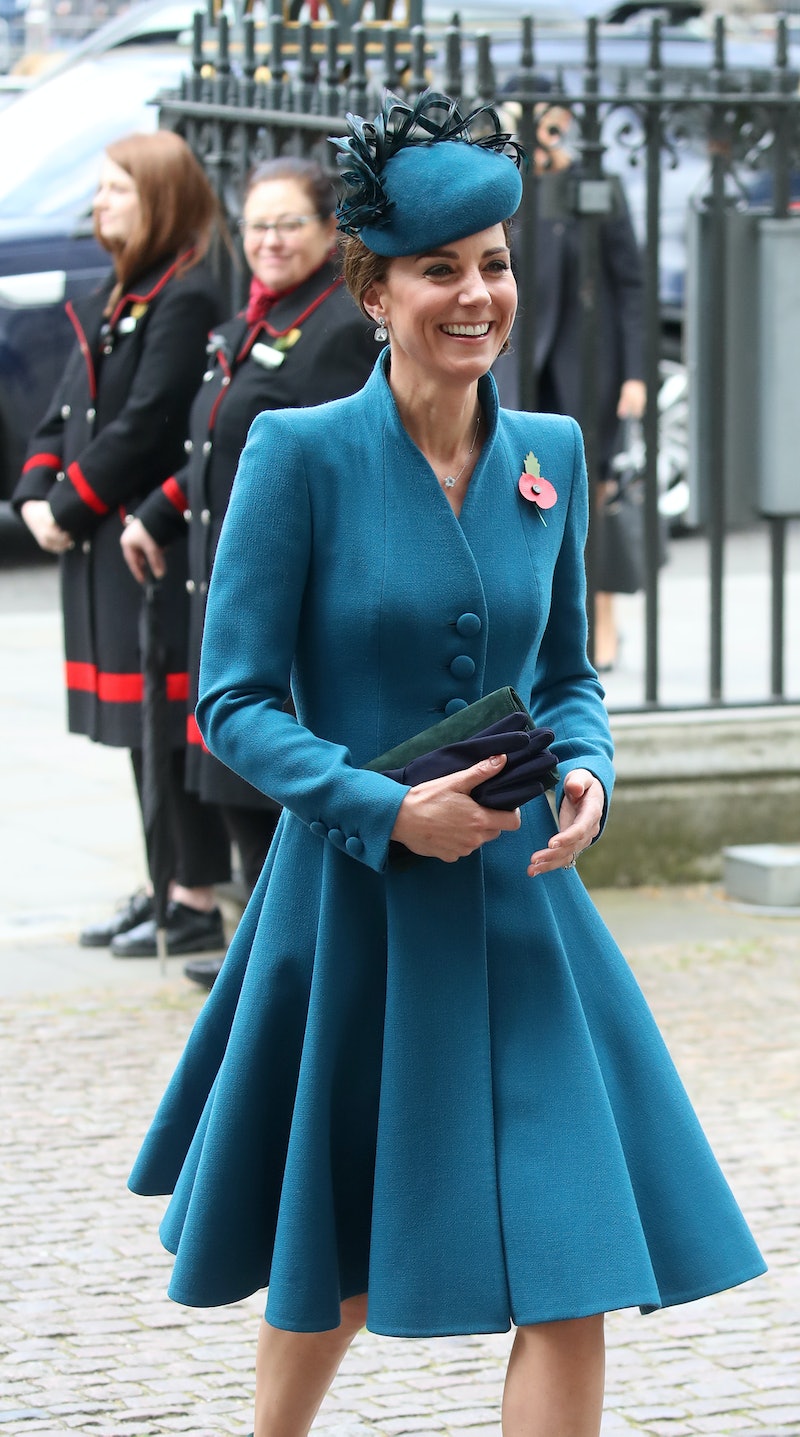 With Meghan Markle on maternity leave (and most of the world on baby Sussex watch) Kate Middleton is carrying on the royal sartorial torch. The Catherine Walker dress that Kate Middleton wore for Anzac Day on April 24 proved that while her style is never boring, she's certainly got a favorite designer.

The Duchess of Cambridge accompanied her brother-in-law Prince Harry to Anzac Day services, a memorial for Australian and New Zealand citizens who have served in the military. Middleton's husband, Prince William, didn't attend with her due to being in New Zealand to honor victims of the Christchurch mosque attacks. According to Harper's Bazaar, Prince Harry stepped in at the last minute to attend the service with her.

The service, which was held at Westminster Abbey, was obviously a more formal occasion, and Middleton's dress was so in line with her usual royal style at these types of events. According to Elle, the Duchess of Cambridge wore a teal coat dress by Catherine Walker and paired the frock with suede pumps, a clutch, and of course, a hat because this is at a church, after all.

While the ensemble is very much without Middleton's style wheelhouse, it's the designer who matters. If you were ever wondering if the Duchess of Cambridge has a go-to, her wearing the Catherine Walker dress for Anzac day proves she just might.

Middleton is far from a stranger to Catherine Walker designs, and it makes total sense. According to PopSugar, Princess Diana was a fan of the fashion house, wearing it many times throughout her life. Now, her daughter-in-law seems to be following in her footsteps. While Middleton changes up the designers she wear fairly frequently (including wearing afford pieces from stores like J.Crew), Catherine Walker seems to be a staple, especially for more formal royal events.

Most recently, in March 2019, Middleton wore another coat dress from the designer when she stepped out for her first solo appearance with the Queen. The pair visited King's College London together, and for the event, Middleton chose a grey frock with a black collar that she paired with black tights and pumps.

In January, Middleton wore an incredibly similar Catherine Walker dress to the one she wore to Anzac Day services. For church services at Sandringham, Middleton's coat dress featured a similar shade of blue, but was paired with a matching headband.

Even in late 2018, Middleton was wearing the designer's coat dresses. Back in November, she wore a deep green frock with velvet cuffs and collar to Armistice Day services. In October, she wore another gray coat dress to honor Leicester City's football club owner who passed in a helicopter crash.

Middleton's choice to wear Catherine Walker to Anzac Day services just proves that this designer is a staple in the Duchess's wardrobe. If it's a coat dress designed by Walker, the Duchess of Cambridge may just already have it in her closet in more than one color. Honestly, no one knows how to wear a coat dress like Middleton, so the more Catherine Walker, the better.

More like this
Lauren London’s Best Outfits From Netflix’s You People
By Alyssa Lapid
Olivia Rodrigo’s Grammys After-Party Dress Was Sequined Perfection
By Alyssa Lapid
Kendall Jenner’s Colored Tights Prove That Cheugy Can Be Chic
By Alyssa Lapid
Megan Fox & Machine Gun Kelly Are A Masterclass In Emo Couple Dressing
By Avery Matera and Allie Fasanella
Get Even More From Bustle — Sign Up For The Newsletter
From hair trends to relationship advice, our daily newsletter has everything you need to sound like a person who’s on TikTok, even if you aren’t.