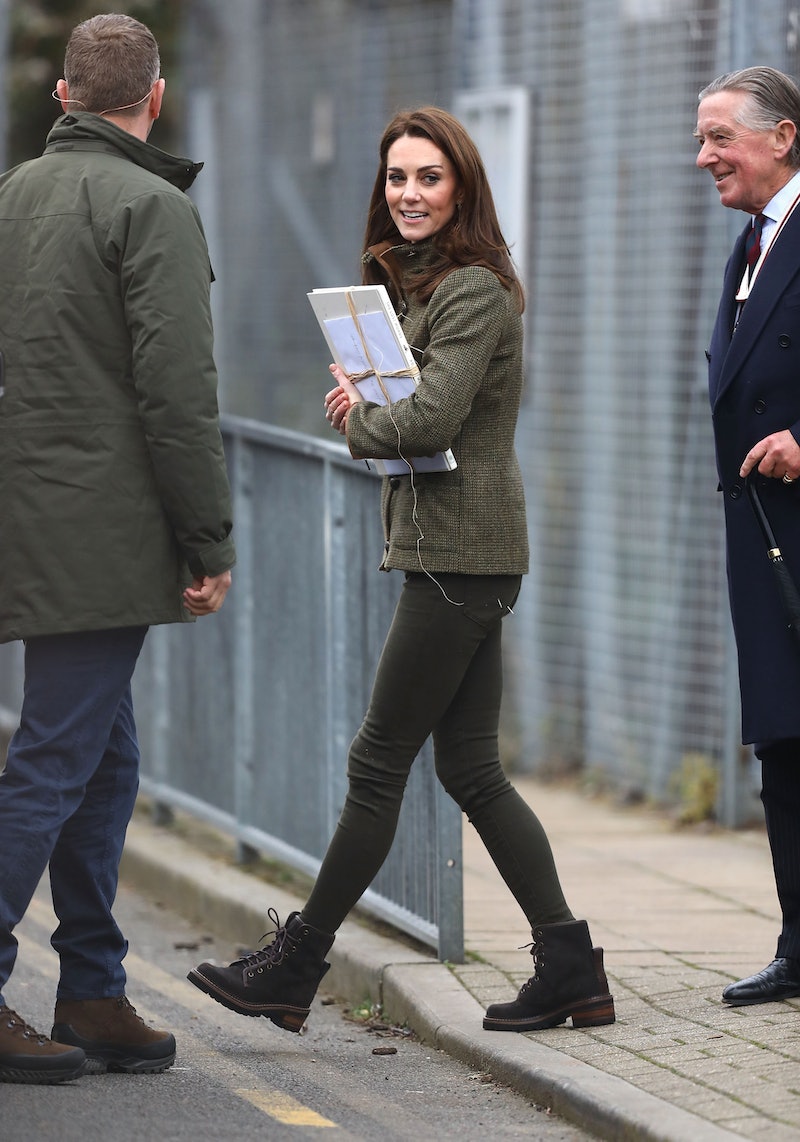 2019 is here which means the royal family is back out and about. For fashion lovers, this means more royal ensembles to use as outfit inspo. The latest? Kate Middleton's J. Crew sweater. While the Duchess of Cambridge's combat boots may have caught the majority of attention when she stepped out for her first royal engagement of the year on Tuesday, there was a surprisingly affordable bit of clothing she hid beneath a jacket. Her sweater turned out to be from J. Crew, and it could signal that the brand is becoming a royal favorite.

On Tuesday, Kate Middleton stepped out for her first royal engagement of 2019. The Duchess traveled to King Henry's Walk Community Garden where she helped children make pizza and saw the impact of community gardens. While there she worn a pair of olive jeans (but not her detailed-knee Zara ones), a Dubarry tweed jacket, and some edgy (by royal standards) combat boots from See by Chloe. While it may have been covered for the majority of the day, Middleton was also wearing a maroon J. Crew sweater (offers sizes XXS-3X) with knit details on the sleeves. The best news about said sweater? It's under $80 and still available to shop on the brand's website.

The sweater is a mock neck design according to Marie Claire and retails for $79.50 on the brand's website. Plus, the sweater comes in sizes XXS-3X and has 12 different colorways. Basically, if you want to emulate Middleton's style without directly copying her look, this sweater will allow you to do it.

In a surprising turn of events, the sweater is actually not sold out yet on the brand's website. You can still snag it in the exact same color Middleton wore today if you'd like. Considering that royal fashion sells out almost instantly after it's worn, it's basically a New Year miracle this piece is still around.

Of course, a royal wearing J. Crew has seemed to become increasingly common. If you're already a fan of Middleton's style, you may have noticed that while lately, yes, she's been wearing headbands, she's also taken to wearing bows in her ponytail. They're a simple accessory that makes a big impact. That little black velvet bow? It's also from J. Crew.

Middleton, however, isn't the only royal with an affinity for J.Crew. Her sister-in-law Meghan Markle has also worn the brand more than once. Her most notable wear was the navy and white coat she wore in early 2018. The coat turned so many head that it sold out not once but twice after Markle wore it.

Could J. Crew become one of the new staple brands for the royals? It seems like it's well its way of joining the ranks of Middleton's affordable Zara jeans and Markle's Rothy's flats. If you want to emulate royal fashions, it seems you may need to head into your local J. Crew. The first item you should snag may just need to be Middleton's mockneck sweater.