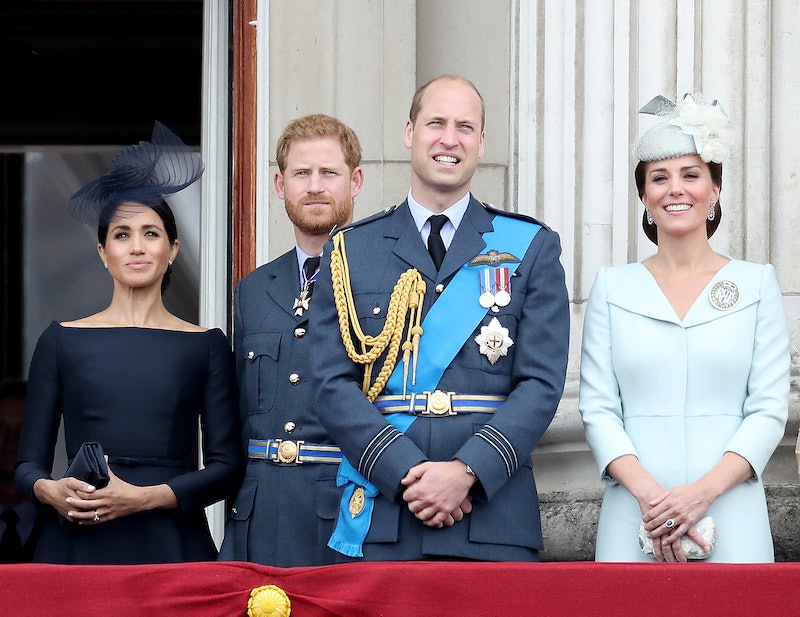 The royals have been busy in recent weeks. Tuesday was no different as (almost) the entire family descended on Westminster Abbey to celebrate 100 years of the RAF before taking to the balcony of Buckingham Palace for a flypast to remember. Despite all the action, Kate Middleton's RAF brooch was the main talking point.

The Duchess of Cambridge arrived with her husband, Prince William, but decided to leave her trio of children at home after an eventful day on Monday for Prince Louis' christening. (However, a crafty George and Charlotte were spotted peeking out of the palace window.) Her appearance was rather unexpected as many had presumed she would be enjoying the relative freedom of maternity leave.

But anyway. Onto the all-important fashion. Middleton proved her love for Alexander McQueen yet again, choosing the same coat dress that she wore for Princess Charlotte's christening and for Prince Harry's wedding to Meghan Markle. Instead of the previous white and yellow looks, she went for a pale blue hue this time round. The Duchess accessorised with a matching blue Sean Barrett hat, nude Gianvito Rossi heels, and a coordinating McQueen clutch. Oh, and she had some pretty noticeable jewels on as well.

Her huge teardrop earrings were borrowed from the Queen's rather substantial jewellery collection. Middleton is clearly a fan of the diamond style as she has been seen sporting them more than once in the past two years. However, they aren't as old as you might think. According to the Queen's Jewel Vault blog, the pendants were first seen on the Queen in 2012 with Middleton initially wearing them in November 2016 for the Place2Be Awards.

Aside from those noticeable earrings, the Duchess of Cambridge's other stand-out accessory was a circular brooch bearing the name of the RAF. The Telegraph reports that this glittering diamond and ruby design is the Air Cadets Dacre brooch aka the highest award that a female Air Cadet can be given.

So what does the 36-year-old royal have to do with the RAF aside from being the wife of a man who was formerly in it? I'm sure you're wondering. Well, in 2015, the Duke of Edinburgh stepped down as patron of the RAF Air Cadets, passing the honour of Honorary Air Commandant to Middleton.

The Duchess was then gifted the brooch as moving forward, the RAF decided to award women with the same sword that its male members received and therefore no longer needed it. She was last seen wearing it at a 2016 service celebrating the 75th anniversary of the Air Cadets.

Middleton's tailored blue outfit paid homage to the RAF's signature colour too and so did Meghan Markle's. Despite many thinking that she had chosen to wear black (a colour which is usually reserved for mourning by royal women), the Duchess of Sussex was in fact photographed in a navy dress by Dior.

The style was in line with most of her other looks in that it had a boat neckline and was accessorised, as always, with a matching hat by Stephen Jones. Nude heels similar to Middleton's adorned her feet and a navy (or maybe black, who can really tell?) clutch finished off the belted ensemble.

Markle was noticeably one of the only royal women not to wear a brooch. (The Queen and Duchess of Cornwall were spotted in various styles.) This is simply because she does not yet have a position that relates to the RAF, according to the Daily Mail. But expect to see some sort of military honour bestowed upon Markle in the future.