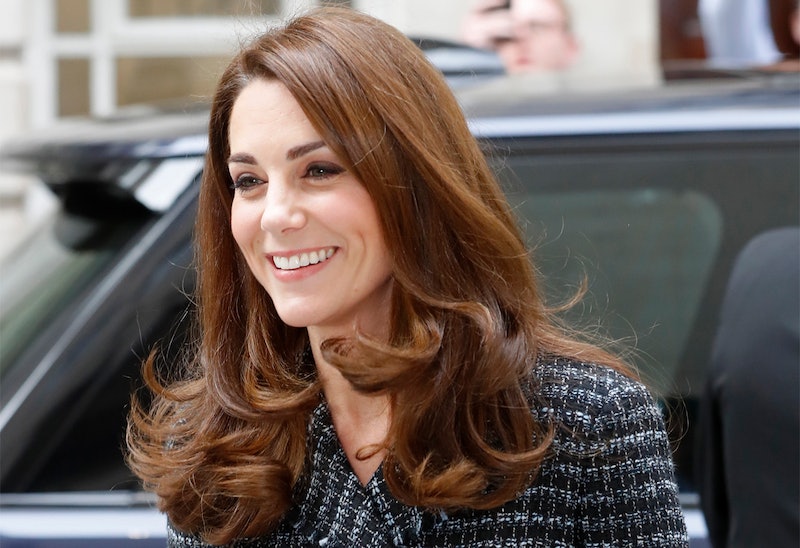 The royals have been busy over the past few days, haven't they? On Wednesday, the Duchess of Cambridge swapped her awards show gown for a much more demure look. Although she is known to rewear her outfits, her most recent ensemble appears to be brand new. But no one's sure who designed Kate Middleton's tweed suit.

Royal fans on Twitter believe the skirt suit — which comprised a black-and-silver double-breasted jacket and A-line skirt — could be a custom Alexander McQueen design. The Express, on the other hand, is claiming it could be a bespoke Chanel look.

Both options could well be a possibility. The Duchess is known for her love of Alexander McQueen. On Sunday, she chose a white one-shouldered gown by the British brand for a striking appearance at the BAFTAs. The last time Kate donned a full Chanel look, however, was back in 2017 during a trip to the home of the label. Conveniently, her Parisian look was also a tweed one, designed in the style of a coat dress with blue and red detailing.

Wherever Kate's most recent outfit is from, it doesn't take away from the fact that her choice was ideal for a day of business. The 37-year-old was attending The Royal Foundation's Mental Health in Education conference, reports the Daily Mail. There, she met headteachers working in schools that are trialling the foundation's Mentally Healthy Schools programme. Kate helped launch it in 2018, and has emphasised the importance of focusing on young people's mental health ever since.

The rest of the royal's outfit was pretty traditional too. She chose a black Mulberry clutch, black tights, and a pair of black suede Tod's pumps. According to a Kate-focused Twitter account, the heels cost £335. Pink diamond and gold Kiki McDonough earrings retailing for over £4,000 topped off the daytime look.

It's clear that Kate is heavily into tweed. She's worn the fabric in numerous ways from a full-length Erdem dress to a blue Rebecca Taylor skirt suit similar to the one worn on Wednesday. If you're hoping to emulate Kate's tweed obsession, the high street is the place to look.

This neutral boucle jacket will smarten up any look. Available in UK size 4 to 18.

And if you're dreaming of a matching skirt, you're in luck. It may be a little too short for the Queen's tastes, but that's the beauty of not being a bonafide royal. Available in UK size 4 to 18.

If you're not a fan of heavy jackets, opt for Zara's button-up cardigan and matching skirt. Both pieces are available separately for £25.99 each. Alternatively, buy the entire set. Available in UK size 6 to 16.

People who don't like suits may still be into this tweed coat. Those frayed edges just belong on Instagram. Available in UK size 18 to 24.

This high-collared jacket is the perfect cover-up when you get cold. Team it with the matching pink skirt to be the ultimate royal copycat. The jacket costs £49.99 while the skirt can be bought separately £35.99. Available in UK size 6 to 12.

Kate would be all over this tweed pencil skirt. It comes in four colours ranging from monochrome to bubblegum pink and three lengths (petite, regular, long). Available in UK size 6 to 20.