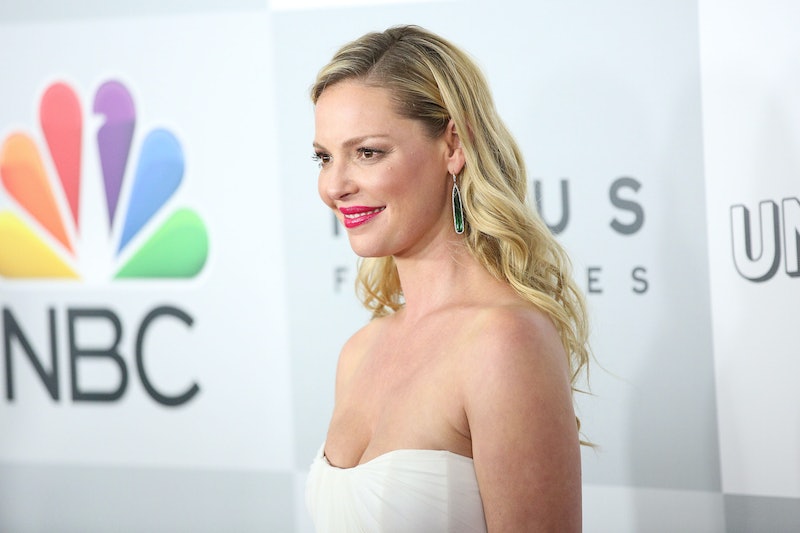 Neither your computer screen nor your eyes are playing tricks on you. Izzie Stevens really is not blonde anymore (well, for now). Katherine Heigl’s gone brunette, and her signature golden locks are a thing of the past (again, it's only for now). The former Grey’s Anatomy star has dyed her hair brown for her role in upcoming Netflix series Firefly Lane, and on Tuesday, Sept. 3, she showed off her new hairdo on Instagram. She wrote in post's caption, “If you haven’t caught my stories this will be a shock for you... #tullyhart #FireflyLane #nextroleforthisgal.”

And no, that is not a wig. Over on IG Stories, Heigl shared a bunch of pics she took while she was at her hair appointment, noting what went into changing up her hair color. “Well… it took 3 hours and 3 processes but… I’m a brunette!” she wrote on one of the selfies she snapped post-appointment. Her blonde days are over (all together: but it's only for now).

Heigl has switched from blonde hair to brown before, but blonde has been her signature look for what feels like almost forever? But again, yes, there are a few exceptions. There were the brunette waves in One for the Money. There were the dark brown curls at the Killers premiere. There was the short light brown 'do she wore during the Roswell era. These looks made people far and wide cry, Can you believe Heigl, who is almost always blonde, is no longer a blonde? And this pin straight brunette situation is no different.

"It took me a while to recognize you!" one fan commented. "Stunning as always!!!" Several others noted that on first glance, they thought she was a different person. Another wrote, "izzie stevens is quaking."

Maybe it's the sunglasses, or maybe it's the filter she used on that car selfie, but Heigl looks more familiar in the two other posts she tossed onto IG Stories.

She is not totally unrecognizable, but she's also not totally recognizable? Like, if she wanted to throw on a pair of bright red glasses and hit Erewhon, she might be able to browse the pressed juice aisle without getting spotted.

As Heigl noted on IG, this new hairdo is for Netflix’s forthcoming adaptation of Firefly Lane by Kristin Hannah. In July, Hollywood Reporter and Variety reported that Heigl will play Tully in the 10-episode series. Per Netflix’s press release:

“Kate and Tully meet as young girls and become inseparable best friends throughout thirty years of ups and downs, successes and failures, depression and disappointments. When an unthinkable betrayal breaks them apart, the two women go their separate ways and it’s unclear whether they will ever be able to reconcile.”

In August, it was announced that Heigl will star opposite Sarah Chalke. We are more or less getting a quasi-Grey's Anatomy and Scrubs crossover. What a treat.

Netflix has not announced Firefly Lane's release date, but when it arrives? Get ready to feel some feelings. Oh, and get ready to see Izzie with brown hair.

More like this
Here’s Everything Coming To & Leaving Netflix In August
By Jake Viswanath
Neil Patrick Harris’ 'Uncoupled' Character Will Make A Life-Changing Decision In A Potential Season 2
By Brad Witter
At 28, Tisha Campbell Was Newly Married & Dancing Through A Career Pivot
By Grace Wehniainen
The 'First Kill' Cast & Fans Are Disappointed Over The Show’s Cancellation
By Brad Witter and Sophia Moore
Get Even More From Bustle — Sign Up For The Newsletter