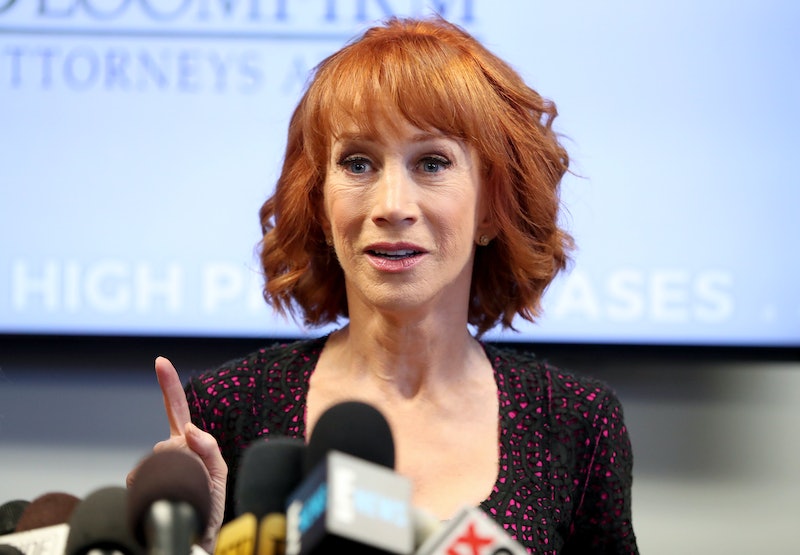 On Friday, the aftermath of the controversial Tyler Shields photoshoot featuring Kathy Griffin holding a prop of Donald Trump's bloody severed head was addressed by Kathy Griffin at a press conference alongside her attorney, Lisa Bloom. At the event, Griffin admitted that she doesn't think she'll have a career after all of this. A reporter asked the 56-year-old comedian if she feared for her career now. To that, Griffin replied, "Absolutely. I don’t think I will have a career after this. I’m going to be honest, [Trump] broke me. He broke me."

She also said she thinks all of this is happening because she is a woman and that it wouldn't have happened to a male comedian. "This wouldn't be happening to a guy, this is a woman thing," she said. According to her, "This wouldn't happen to a guy...I have been living with this my whole career." She also added, "I'm not afraid of Donald Trump. He's a bully. I've dealt with older white guys trying to keep me down my whole life."

On Tuesday, TMZ released Shields' photos of Griffin resulting in a huge controversy and that has impacted Griffin significantly. CNN fired Griffin and she hired herself a lawyer, Bloom, in an effort to protect herself from what she calls bullying from the Trump family and Trump's supporters. Griffin has also claimed that she's received death threats and that the Secret Service is investigating her. She's also hired a criminal defense attorney, Dmitry Gorin, in response to the alleged investigation from the Secret Service.

On Wednesday, before the press conference, Griffin issued an apology for the photo in an Instagram video. "I sincerely apologize. I'm just now seeing the reaction to these images. I'm a comic, I cross the line, I move the line, then I cross it." She added, "I went way too far. The image is too disturbing, I understand how it offends people, it wasn't funny, I get it. I've made a lot of mistakes in my career, I will continue, and I ask for your forgiveness."

Trump responded to the photo on Twitter Tuesday and wrote, "Kathy Griffin should be ashamed of herself. My children, especially my 11 year old son, Barron, are having a hard time with this. Sick!"

Of her comedy about Trump, Griffin said, "I’m not laying down for this guy...I'm going to make fun of him."