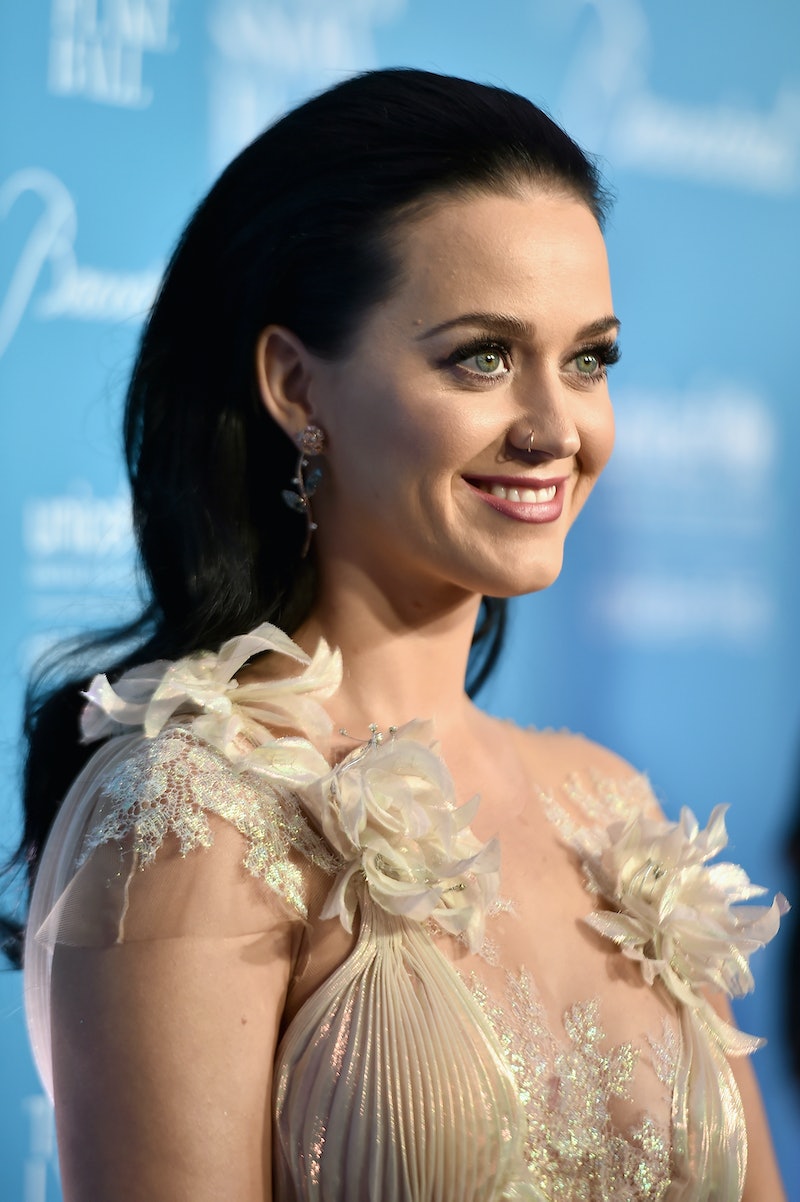 In anticipation of her forthcoming, but yet-to-be announced album, Katy Perry just broke a music record like only Adele — oh sorry, Katy Perry — can. Entertainment Weekly reported that Perry's latest single "Chained to the Rhythm" had 3,062,293 streams during its first day on Spotify. That means her song holds the title "highest first-day streaming for single track by a female artist."

This won't come as shocking news to a large majority of you, but most of Spotify's streaming records are held by male artists. The preceding "highest first-day of streaming" accolade belongs to Ed Sheeran. “Shape of You” was played 6,868,642 times in 24 hours. His other single, “Castle On The Hill,” was played 6,168,395 times. As you can see, both of those double Perry's numbers. Before Sheeran, One Direction hit the highest landmark with "Drag Me Down." It had 4,759,698 plays. And before that, Wiz Khalifa's "See You Again" was played 4.26 million times. Once again, both of those are over a million more than Perry's plays.

Currently, Drake's "One Dance" is the most streamed Spotify song of all time (the most streamed song of all time). It was also the first song to reach 1 billion plays on the service. They didn't release numbers, but late last year, Spotify announced that The Weeknd broke the record for most album streams on the service in 24 hours, following his release of Starboy. Justin Bieber broke the record for most streams in one week following an album's release for Purpose. Prior to that, boy band One Direction's record Made in the A.M. held the record, and before that, it was the Weeknd's Beauty Behind The Madness. Are you seeing a trend here? (Where the woman at?)

To be fair, two of this year's biggest female stars in the music industry — Adele and Beyoncé, who are both up for an insane amount of Grammys — weren't on Spotify when their albums released. Bey put her album exclusively on Tidal, and Adele's 25 didn't hit the service until seven months after its debut. There's no way to tell what their numbers would have been, had they both released their albums on Spotify the first day.

Though the numbers aren't high enough to beat out an all-boy band, or a solo male artist, Perry's achievement should first be recognized as a success for female artists, and secondly, shine (another) light on the glaring gender disparity in the music industry.

2016 was another monumental year for Adele, Beyoncé, and Rihanna, and though she released music later in the year, Lady Gaga. But then again, these woman have all dominated the music industry for years. There are only a few big names that comprise the top spots for pop female musicians. (The list gets shorter when it comes to hip-hop female musicians.) The truth is this: It's harder to break through, and therefore crush records, as a female artist than it is for a male artist.

But, it's not all so bleak. We seem to be at the precipice of change. Adele's record-breaking 25 was so impressive it eclipsed every other record break of any kind this year, including probably, everything in the Guinness Book. Lemonade changed the industry. Gaga's solo performance at the Super Bowl this year will be written about and discussed for decades to come. And the latest win? Perry's Spotify achievement. Because over 3 million listens in one day is nothing to balk at. To quote Helen Reddy's 1971 song, "I am woman, hear me roar / In numbers too big to ignore."

Or if you're Perry, just "roar" works too.