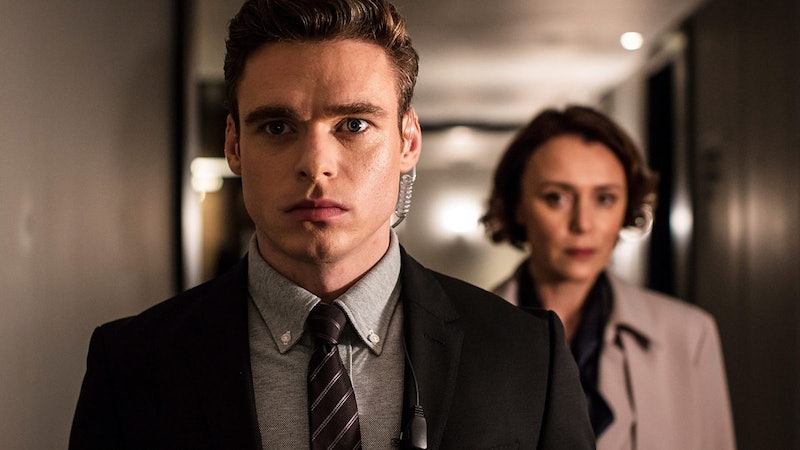 Who'll play James Bond after the blonde-haired, blue-eyed Adonis that is Daniel Craig gives up his gun and his fancy car? That's been the burning question for what's felt like several years, and multiple actors' names have been thrown into the ring. One person that's been hotly tipped to play the iconic British role is Game of Thrones' Richard Madden. And the actor made yet another great case for himself when he starred in super-popular drama Bodyguard in 2018. His BBC co-star has been gushing about him ever since, and now Keeley Hawes wants Richard Madden to play James Bond.

Speaking at the Radio Times Covers Party on Wednesday, Jan. 31, Hawes said that Madden would make a "phenomenal" Bond, the Radio Times reports. Hawes said that Madden's character in Bodyguard — the steely, slightly mysterious David Budd — reminded her of Bond. "'I said to Richard while we were shooting, 'This is like James Bond!'" she enthused, "I would love to see Richard playing James Bond; I would love that."

And it looks like Madden is pretty keen on playing the role, too. He even hinted at already being offered it, by saying nothing...

"I don't want to curse anything by saying anything. I think that’s the curse of that. If you talk about anything, you’ll curse it," he told GQ on Nov. 30, 2018.

Other than Madden, Idris Elba's name has also been thrown around a lot when it comes to who will play Bond. Madden's an incredible actor, but, for me, it's gotta be Elba. Doctor Who's a woman, now let's cast a black actor for James Bond. Not only has Elba got more than enough of the acting chops necessary for the role, but by casting him as Bond, it could be one step towards the franchise amending its seriously whitewashed legacy.

James Bond also has some famously brazen misogyny baked into its formula, which it will have to dismantle if it still wants to survive in the current social climate. In my opinion, Elba would be the right man for that job on this front, too — well, as long as that job has to be carried out by a man, that is. Jane Bond, anyone? Anyway, Elba's been a loud male spokesperson for the #MeToo movement, having said that the movement's "only difficult if you're a man with something to hide," in his interview with the Sunday Times on Dec. 15, 2018. Right on, Elba.

And there's something else that might give Elba the edge. During his interview with GQ, Madden confessed that season one of Bodyguard "had taken so much out of [him] physically, mentally and personally." However, according to Digital Spay, it's pretty safe to assume that Madden will be coming back for season two. So, after another round of Bodyguard, would Madden have it in him to take on the role of Bond? If not him, it's gotta be Elba, right? Or maybe there's another person waiting in the wings. Who knows?

More like this
Lewis Hamilton Turned Down A Role In 'Top Gun: Maverick' For This Surprising Reason
By Darshita Goyal
Harper Teasing David Beckham’s Dad Dancing Is Beyond Adorable
By Frances Stewart
The Spice Girls & Adele Lead Girl Power Celebrations For Lionesses’ Euros Win
By Sophie McEvoy
Even The Royal Family Can’t Get Over Alessia Russo’s Backheel Goal For England
By Maxine Harrison
Get The Very Best Of Bustle/UK