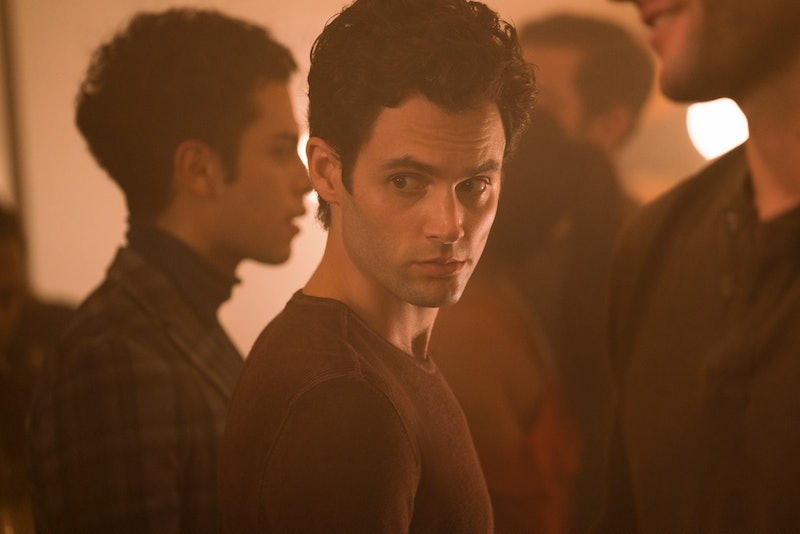 She may not skulk around late at night in a baseball cap, but fans are comparing Bachelor contestant Kelley to Joe Goldberg from YOU. After she revealed she just so happened to run into Peter at a hotel before filming, Twitter joked it was far from coincidental. Let's just hope she hasn't gone as far as planting spyware on his phone.

Kelley claims that she didn’t really want to do the show, but maybe that's what she wants Peter to think. "I kept saying that there would be a sign from God that would tell me if I should do this," she told Peter during her limo entrance. "Meeting you there, I was like, I think this is a pretty obvious sign."

Come on, does that not sound exactly like something Joe (Will? Whatever he's going by now?) would say? There are a few more holes in this story, too. According to her ABC bio, Kelley is from Chicago, and she just so happened to be across the country in California. She said it was for a friend's wedding, which is plausible, but the fact that they were both in the lobby at the same time seems too good to be true.

Also, the fact that the two ended the meeting with a dance is peculiar. Like, how long was this lobby encounter? Long enough to put together a choreography, apparently. It included a full a spin and dip.

"It seems like there's more to the Kelley story than they're letting on," @JeremyDBradley on Twitter wrote. "If it was such a brief encounter, it's suspect that it was so memorable to both of them."

After finishing their performance, Kelley walked into the mansion with a confident, casual strut. "It was good that he remembered me and I think the spark is still there," she said. "So that's just like reassuring that I wanna be here."

She was also exceptionally calm when approaching the girls inside, telling them about her and Peter's previous meet-up. It was like that scene from Season 2 of YOU where Joe breezed through his run-in with officer Finch, bag of murder victim belongings in hand. The pressure was on, but she delivered without breaking a sweat.

Let's also not forget that Kelley went to Stagecoach music festival — the same one that fostered the Bachelor in Paradise love triangle between Blake Horstmann, Caelynn Miller-Keyes, and Kristina Schulman. Peter may not have been in attendance, but a lot of his friends were. Hopefully none of them will end up like Peach Salinger. Kelley, we're watching you.