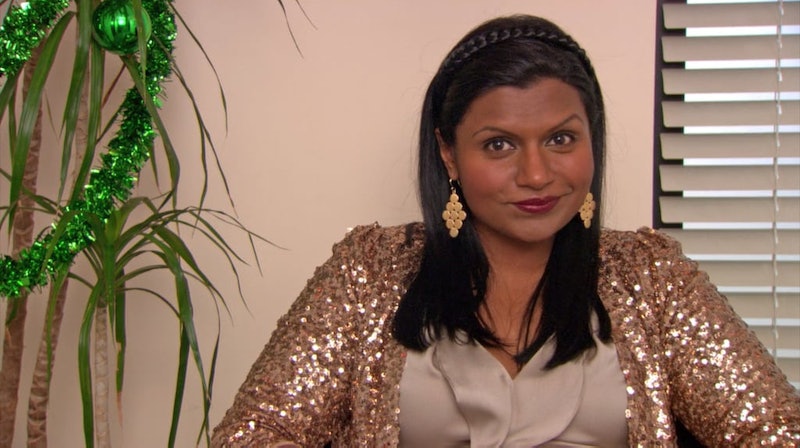 A few years back, Kelly Kapoor's new year's resolution was to get more attention, and she might have finally succeeded. Mindy Kaling revealed where Kelly Kapoor would be now and it's bound to make the rounds at the next Dunder Mifflin reunion. Turns out, Kaling thinks her Office character might be in jail for... murder.

In an interview with Variety, Kaling dropped her theory about what happened to Kelly after the documentary cameras turned off. "There is not an insignificant part of me that thinks Kelly might be in jail," she said. As for the circumstances in which Kelly might have found herself locked up, Kaling thinks she knows. "A crime of passion," she says. "The character just kept getting a little more unhinged."

It's true, that over the course of nine seasons, Kelly does do some very questionable things to win the affections of B.J. Novak's Ryan Howard, the temp who she just couldn't quit and who definitely couldn't seem to quit Dunder Mifflin. In the finale, she leaves her perfectly good doctor fiancé Ravi to run off with Ryan, who just abandons his baby at Dwight and Angela's wedding.

"I don't want to say that she murdered Ryan," Kaling told Variety. "But I'm also not convinced that he's still alive in the world of #TheOffice." Honestly, this theory totally checks out. After all, they were definitely the Romeo and Juliet of the Scranton branch — the Claire Danes one, of course.

Kaling isn't the only former Office star who's thought about where their character would be now. Last year, Jenna Fischer told E! that she'd like to imagine that Pam Beesly is still with Jim, enjoying life as a mom, and "working in some sort of artistic field, you know, continuing on her streak of doing murals and being commissioned as an artist." And definitely not in jail, so phew.

Kaling also told Variety that when it comes to an Office reunion she'd be interested. Not necessarily in starring in it, but she said anything Office showrunner Greg Daniels decided to do in relation to the show she "would watch and love and want to help him with."

Last year, it was reported that there could be an Office revival that could include actors from the original, but there hasn't been any other details about the show. While John Krasinski said he wants to return to The Office and Ellie Kemper said she'd like to play Erin again, Steve Carell isn't interested in returning for a revival, for a very good reason.

He's concerned that it just want play as well as the original. In an interview with Esquire, Carell said that "apart from the fact that I just don’t think that’s a good idea, it might be impossible to do that show today and have people accept it the way it was accepted ten years ago."

More recently, Paul Liberstein, a.k.a. Toby from The Office shared his idea for an Office reunion that would be a one-time thing since he thinks it would be "a bit much" to do a full-on revival with the original cast. "I think a one-off special would be the way to go," he told The Daily Beast last month. "Some event that brings everyone back together."

If an Office reunion does ever end up happening, let's hope it takes us inside Kelly's prison life á la Netflix's Making A Murderer. Who knows, maybe Prison Mike will show up to teach her about the Dementors.