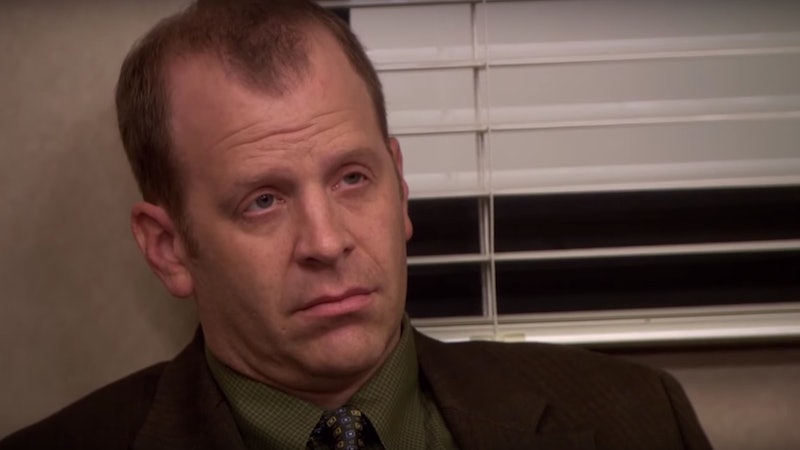 Much to the chagrin of Michael Scott, it looks like Toby is hoping to get back together with his former Dunder-Mifflin coworkers once more. Show runner and actor Paul Lieberstein revealed his idea for a potential Office reunion — although, he did note that it probably doesn't make sense for the cast to do a proper reboot.

In a recent interview with The Daily Beast, Lieberstein, who wrote and acted on the beloved NBC sitcom for all 9 seasons (and served as a show runner from Season 5 to 8), opened up about the idea of getting the Dunder-Mifflin crew back together. "I think a one-off special would be the way to go," he told the outlet. "Some event that brings everyone back together."

But if fans are hoping for a big, elaborate reboot of the The Office, well, it looks like Toby has ruined something else: Lieberstein admitted to The Daily Beast that he thinks it would be "a bit much" to do a full-on revival.

The actor and writer's suggestion of a one-off reunion is a far cry from his statements on a revival from 2014, in which Lieberstein told TMZ that there was "no chance" of a possible reunion.

Of course, Lieberstein's comments have once again kicked up rumors about a possible Office reboot in the wake of two, unofficial reunions that the cast have treated fans to recently. In November, when Steve Carell hosted Saturday Night Live, his monologue turned into a mini-reunion, thanks to appearances from former costars Ellie Kemper, Jenna Fischer and Ed Helms. In early December, Angela Kinsey shared photos from a casual "family reunion" that she enjoyed with some of her friends and cast members.

"Some of the old gang got together today..." Kinsey wrote alongside a group photo. "It was so great to see everyone! I turned to Ed and said, 'I feel like we are at a family reunion.' He smiled and said, 'We are.' Thanks Greg for hosting! For those who couldn’t make it... you were missed!"

And way back in July, John Krasinski told Variety that he would be interested in taking part in an Office reunion, in order to check in on how his character, Jim Halpert, is doing in 2018. "I need the incredible writers of our show to tell me what [Jim's] doing because I’m kind of worried about him," Krasinski said.

"He had a whole lot of hopes and dreams, he had a lot of zany ideas, and then he went to Austin to live his life and I feel like the dreams are still in his head so let’s see what he’s doing now," he continued.

In addition to pondering a possible Office reboot, Lieberstein also explained what happened to The Farm, the proposed spin-off about Dwight Schrute's family beet farm. Lieberstein left his role as show runner in Season 8 in order to develop the spin-off, which the network ultimately passed on. (The pilot aired in Season 9 as the episode "The Farm.")

"It was going to settle into a mockumentary about a small family farm, and trying to make it at a time when they’re being squeezed out—just how rough it is,” Lieberstein told The Daily Beast. "It would have old characters and new, and they’d have kept the B&B going. It would have been a lot of fun. There was turnover at NBC at the time, and the new regime came in with their own ideas."

Fans might not have gotten a reunion or that Dwight-centric spinoff, but at least they can always take comfort in knowing that The Office is always available to rewatch, again and again. Time may pass, but Michael's hatred of Toby will long remain — and it will always be funny.