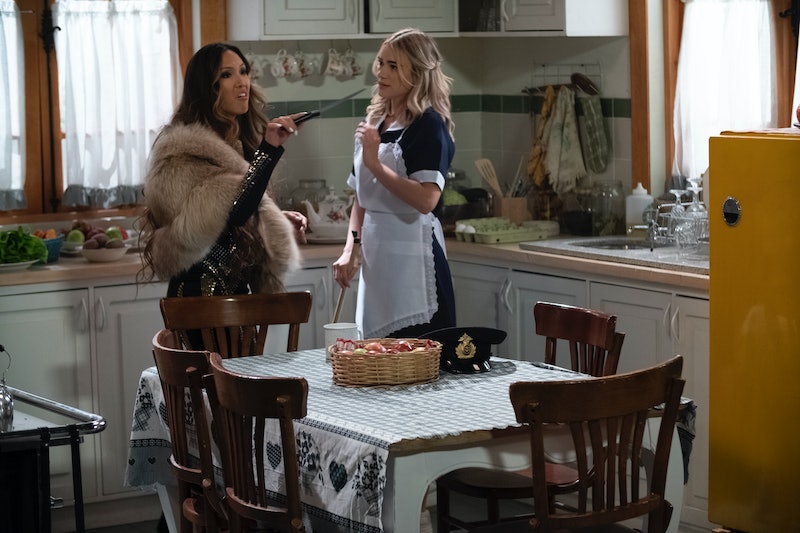 This season of The Bachelor has been called the most dramatic one ever — and the Women Tell All special proved that the women aren't ready to bury the hatchet just yet. Kelsey and Mykenna confronted Tammy on Peter's Women Tell All special and the fight, which eventually involved almost everyone on the stage, was absolutely brutal. The house flipper started out the season as a fan favorite, thanks to her goofy facial expressions and one-liners, but things took a turn during the girls' trip to Costa Rica, when her "concern" for Kelsey's emotional well-being meant accusing her of being emotionally unstable.

While Kelsey was able to joke about her emotional reactions to things that happened on the show — even admitting that she "overreacted" to Champagne-gate — she didn't think Tammy's accusations were a laughing matter. "You labeled me as an alcoholic, as emotionally unstable, and now people think that I'm something I'm not," Kelsey said. Tammy, meanwhile, maintained that everyone was talking about the blonde behind her back, but that she was the only one who actually articulated anything out loud.

Tammy also justified sharing her concerns about Kelsey's mental state with Peter by stating that since they were all "sharing saliva with the same man," it was important to bring any concerns to him. However, when it came to the biggest accusations that she leveled leveled against Kelsey, Tammy claimed that spotting "alcoholic tendencies" isn't the same as calling someone an alcoholic, and blamed Victoria P. for starting the "pill popping" rumor that to this day, Tammy has never apologized for. That, coupled with her dramatic eye rolls at everyone else's comments, firmly turned Bachelor Nation against her.

Once Kelsey had said her piece, it was time for Mykenna to confront Tammy — and that's where things got really messy. Apparently, Tammy had made it no secret that she didn't like Mykenna throughout the whole competition, even though fans only saw them face off in Chile. "You were always crying," Tammy said, before also accusing Mykenna of "spreading her legs" whenever the camera was on her for attention.

When the fashion blogger stated that Tammy had accused her of not being ready for a "grown-up" relationship, however, Kiarra chimed in and revealed that some of the other girls also thought that Mykenna was immature. "I'm a nanny, I know childish behavior," she stated, while Maurissa stated that Mykenna was only in it for fame because, "you're literally a meme." Just because they're not fighting over the same man anymore doesn't mean that everyone's done fighting.

Ultimately, though, Bachelor Nation ended up on Mykenna's side, as she explained that Tammy "made me feel so bad about myself" during their time on the show together. And while Tammy had a few comebacks that earned claps from fans — "How long did you rehearse this?" was a particular favorite — her habit of rolling her eyes at everything Kelsey and Mykenna said and her refusal to apologize meant that Tammy ended the WTA special as this season's biggest villain.

Tammy, Mykenna and Kelsey may not have won The Bachelor, but they've definitely won reality TV immortality with their vicious battle to the end on the Women Tell All.