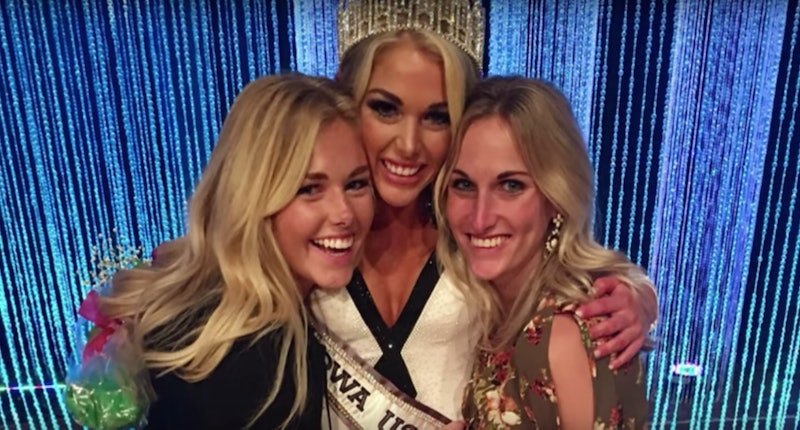 Past experience in pageants seems to be a solid prerequisite for becoming a contestant on The Bachelor. Colton's season featured Miss USA competitors Hannah Brown and Caelynn Miller-Keyes and for Peter's season, Kelsey from The Bachelor has a pageant history as well. Kelsey competed in Miss USA like Hannah and Caelynn, but the 28-year-old participated the year prior to them in 2017, so she likely hasn't crossed paths with the alum. Nowadays, Kelsey works as a "professional clothier" and while her Bachelor bio shows she's proud of her pageant past, her tenure as a competitor was relatively short.

As Kelsey explained on the Des Moines radio show Saturday Morning Live, she got involved in pageants after her younger sister decided to compete in Miss Iowa Teen USA for 2014. She had just moved back home after graduating college and Kelsey said she was looking for something to motivate her. She enjoyed helping her sister, so she decided to enter the pageant scene herself. She found success quickly since in her very first year participating in Miss Iowa USA, Kelsey was the second runner-up. The next year, she was first runner-up and then in 2016, she won the crown to become Miss Iowa USA 2017, which led to her competing in Miss USA.

She told Saturday Morning Live that her third year competing would have been her final year even if she hadn't won Miss Iowa USA due to age limitations and how expensive competing in pageants can be. But here's how she made her way to the Miss USA stage.

Being The First Runner-Up For Miss Iowa USA 2016

You can watch Kelsey lose in her second year competing at Miss Iowa when she earned the first runner-up title.

But the very next year, Kelsey got to accept the crown from the woman who had won the year before, Alissa Morrison when she was crowned Miss Iowa USA 2017.

Competing In The 2017 Miss USA Competition

As Miss Iowa, she participated in the Miss USA competition in May 2017. The video of the preliminary competition is available on the Miss USA YouTube channel where Kelsey introduces herself at 4:10, participates in the swimsuit competition at 21:44, and does the evening gown section at 52:00. But because she didn't make the top 10, she didn't get much screentime during the official Miss USA pageant on May 14, 2017.

Saying Goodbye To Being Miss Iowa

In October 2017, Kelsey had to hand over her crown to Jenny Valliere. But she celebrated her time as Miss Iowa on social media highlighting some of the volunteer work she did with the Best Buddies organization.

Kelsey wrote in her Bachelor bio that because she's from the pageant world she's an "old pro at competing with other women, but don't get it twisted, she's not looking for drama." Still, Kelsey's time doing pageants shows that she knows how to make a splash when she enters a scene.

More like this
This 'Bachelor' Contestant Got Back With Her Bachelor Nation Boyfriend After Going Home
By Grace Wehniainen
These 'Bachelor' Spoilers Suggest Christina Mandrell Is The New Villain
By Grace Wehniainen
Hannah Ann Got Engaged 3 Years After 'The Bachelor' & The Proposal Was Dreamy
By Grace Wehniainen
The Bachelor’s Greer Blitzer Apologized For “Uneducated, Ignorant” Past Tweets
By Brad Witter
Get Even More From Bustle — Sign Up For The Newsletter
From hair trends to relationship advice, our daily newsletter has everything you need to sound like a person who’s on TikTok, even if you aren’t.