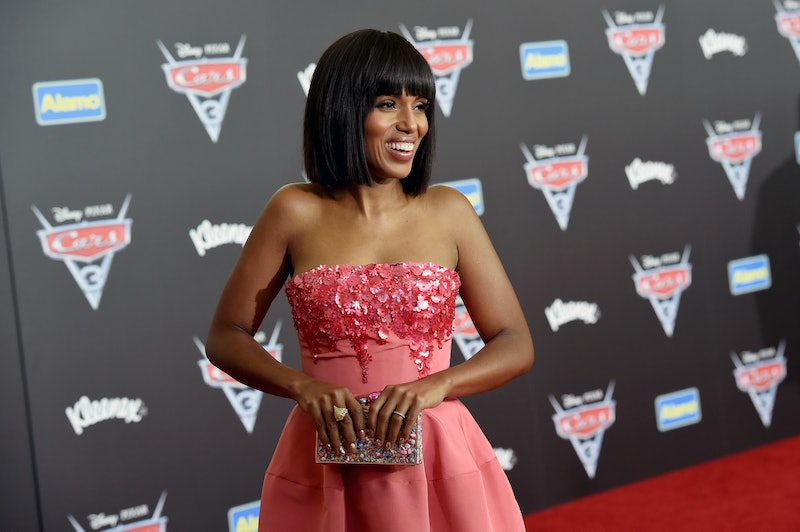 One of the many questions plaguing Pixar fans is what happened to the humans in the Cars universe? Given that they exist in a world not unlike the one people live in — they even have a Pope — it's a logical question, and the answers people usually give tend to take a dark turn. In an interview with Moviefone, Kerry Washington offered a hopeful Cars universe theory that doesn't involve any scary Terminator-esque uprising of the machines.

The Scandal star explained she loves the characters like Lightning McQueen too much to believe he or his ancestors wiped out humanity. Instead, Washington, who stars in Cars 3, explained she believes the films take place in an alternate universe that exists alongside the world of humans. In a video interview, she elaborated,

I didn't think it was possible to love Washington more than I already did, but then she came up with this beautiful, and not at all traumatizing, answer to a Pixar question that keeps me up at night. Seriously, this is so much better than the answer her Cars 3 co-star Armie Hammer came up with. In the video below, he floats a human fuel theory that is the stuff of nightmares.

Washington's idea is not only kid-friendly, it also fits in with the optimistic tone of Pixar's movies. Sure, the Earth is turned into a landfill in WALL-E, but even that movie has a happy ending. It's hard to believe the world of Cars would be grounded in such bleak origins. Especially when you take into consideration the fact that the characters in question have an all-automobile version of The Incredibles. Come on, there's no way they could be that nefarious.

Cars 3 star Cristela Alonzo concurs with Washington. She too subscribes to the alternate universe theory. As far as she's concerned, there's no guarantee Cars even takes place on Earth. I have to say, I am so grateful for these two actors and their positive, hopeful theories about this creative movie universe. Believing the cars have always existed independent of humans not only makes sense, it's also so much more comforting than the alternative answer.