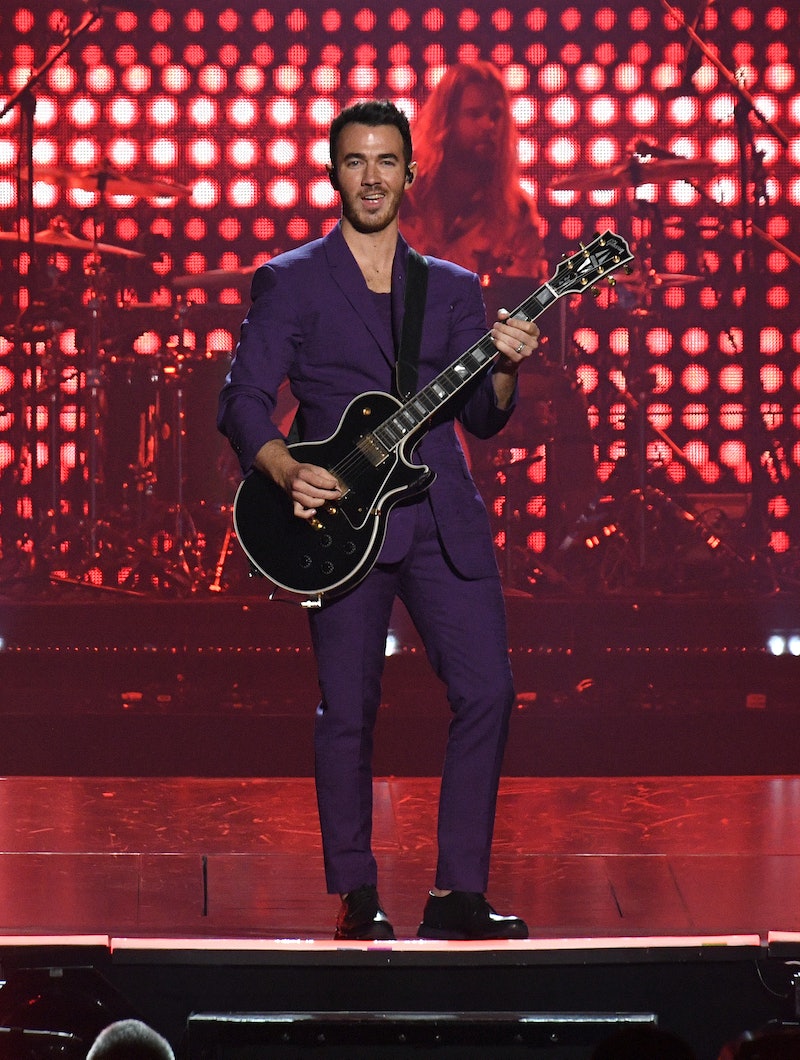 Welcome back to the latest edition of A Celebrity Got A Tattoo. For those who love the art and meaning that typically comes along with ink, you're going to love Kevin Jonas' bunny and bear stuffed animal tattoo. The minimalist and small bit of new ink on Jonas' arm is a sweet homage to his daughters, and you need to see it.

In an Instagram post on Aug. 10, Jonas revealed the new tattoo on what seems to be his forearm, just before the bend in his elbow. The new piece shows a smiling stuffed bunny alongside a stuffed bear holding hands. In his caption, the Jonas Brothers guitarist thanks tattoo artist Dragon (who works at famous celebrity tattoo artist Bang Bang's studio) writing, "Newest piece to the collection thank you @drag_ink for making it come to life. Love bringing reminders of my girls with me everywhere I go!"

While the photo of the new tattoo doesn't explain its significance, Jonas followed up the post on his feed with an Instagram story that showcases both a stuffed bunny and a stuffed bear separately. The images certainly seem to be a way of letting fans know that the animals belong to his daughters Alena and Valentina.

Whether fans realize it or not, they may have seen the two stuffed animals before. Both Jonas and his wife Danielle frequently post photos of their family, including their girls. For those with an observant eye, they may have spied both Alena and Valentina with the animals on their parents' Instagram accounts.

The bunny and bear seem to go wherever the Jonas daughter go. There are photos of the adorable girls and their stuffed animals sleeping on their dad, while eating dinner, and out and about with their parents. Now, their toys have been immortalized on their dad's arm in a sweet new piece of ink.

Kevin Jonas wasn't the only family member to get a tattoo. His wife Danielle also seems to have added a new piece as well. In a photo posted to Dragon's account, both Kevin and Danielle are at the shop posing with the artist. However, if you flip through the post, you'll see that Danielle seems to have gotten a set of stars on her hip while Kevin got the stuffed animals.

The new pieces are far from the Jonas family's only tattoos. Each member of the band has unique ink, but they also have shared pieces that connect back to their family. For Kevin, the latest ink is just another in a line of tattoos that represent his family. As for Joe Jonas, he and wife Sophie Turner have multiple matching tattoos. In fact, Joe also has matching ink with their brother Nick. Clearly, tattoos are a family affair for the Jonases.

Given that the Jonas Brothers and their spouses are no strangers to tattoos, there could be even more new ink on the horizon. Whether the pieces will match one another or just be something meaningful to them as individuals, more Jonas tattoos seem likely.