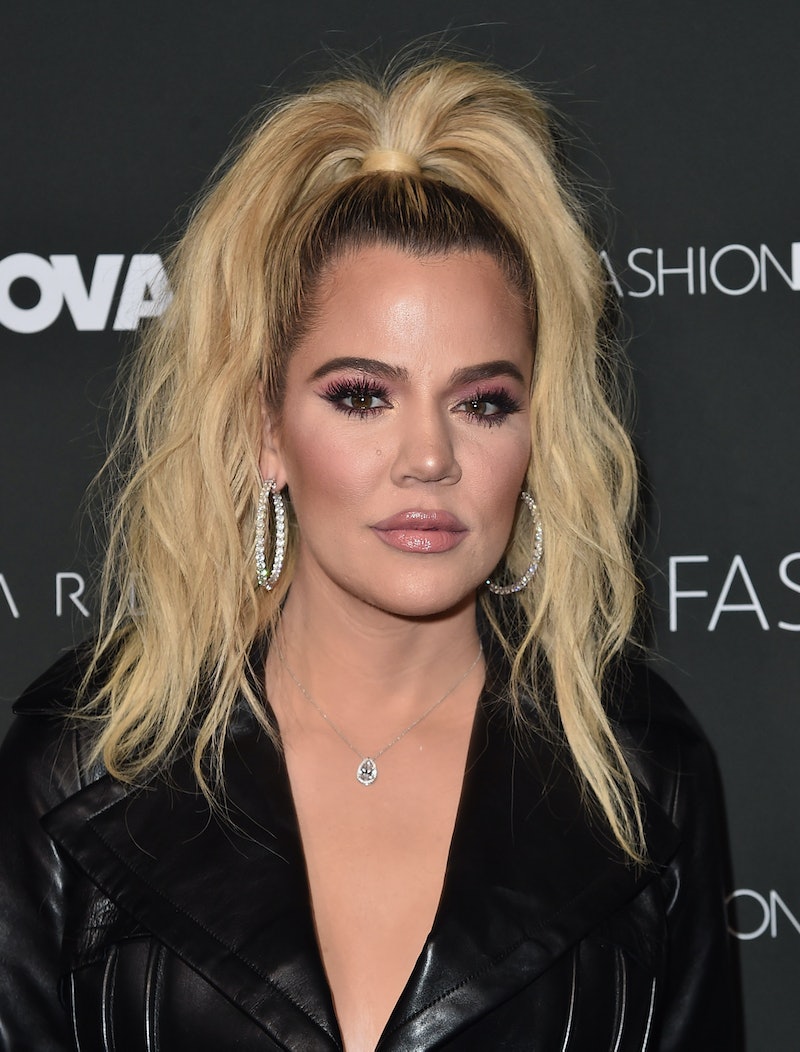 The Kardashian and Jenner sisters are in the news pretty much daily. It's the next generation of the family that you don't necessarily hear a lot about, and that's because they're just kids. However, according to Instagram Khloe Kardashian and Penelope Disick got matching haircut, and it proves that this aunt and niece pair may just be the cutest out of the whole bunch (and there are a LOT of kids).

According to an Instagram post from Kardashian, she and her niece are rocking matching haircuts because Penelope is "obsessed" with her. Kardashian's caption is clearly a joke (she even added a jk to it), but the fact stands that the pair looks so cute together in their adorable bobs. In fact, in the photo, Kardashian and Disick are even posing in the same way for the camera. In a second, Disick's dad Scott Disick even pops into the photo for a super cute family moment.

While Penelope Disick probably just got her hair cut because she's a kid who wanted to chop her hair off, she and her aunt Khloe Kardashian's bobs make them the power aunt and niece duo in the family, at least for the given moment that is. Let's be honest, every kid in this family is adorable.

Disick and Kardashian's twinning moment is also not exactly new when it comes to their extended family. Apparently, the Kardashians and Jenners seem to believe that life is better when you're twinning with your family members. While the kids are general left out of these moments (because hello, they're kids), their aunts and moms are pros at taking style inspiration from one another.

Some of the most obvious twinning moments have happened when the women have collaborated together on projects. For the second team-up between Kylie Jenner's Kylie Cosmetics and Kim Kardashian, the pair did a photo shoot together where they could have practically been twins. With short dark bobs and similar clothing, this was definite a twin win.

Kim isn't the only member of her family that Kylie Jenner has twinned with, though, and Khloe is certainly no stranger to twinning either. During the time when neither Kardashian nor Jenner had announced their pregnancies (seems like a lifetime ago, right?), the pair took to Instagram together and looked basically identical thanks to their matching blonde hair. Fans now know that this photo was probably taken at a maternity photoshoot shown in Jenner's birth announcement video. Because apparently, the power of twinning doesn't just stop at hair. Khloe Kardashian, Kim Kardashian, and Jenner were also all expecting babies at the same time.

Whether all these twinning moments are just coincidence or a careful coordinated moment for marketing purposes, the women of the Kardashian and Jenner family certainly know how to pull off a style moment together.

As for Kardashian and her niece Disick, though, they may just have the cutest twinning moment yet. But hey, there are a lot of sisters and a lot of kiddos in this clan, so here's hoping to more adorable moments soon.